Why I’m a “STEMinist,” and You Should Be Too

Why I’m a “STEMinist,” and You Should Be Too

While her well-deserved acknowledgement gives us a reason to celebrate her pioneering work in generating high-intensity laser pulses, a method used in modern LASIK eye surgery, her win also reflects a larger problem in society: women’s limited access to training in STEM fields, or Science, Technology, Engineering, and Mathematics.

In the 116-year history of the Nobel Prize in Physics, only three women have won. 97% of all Nobel Prize winners have been men. While it’s true that women scientist are far less likely to be recognized and much less celebrated for their work, the problem has its roots in the pervasive stereotypes, biases and discrimination that prevent girls from pursuing and excelling in STEM fields.

Today, on the International Day of the Girl, UNICEF is also calling attention to the global gender gap in access to education and employment opportunities through the theme With Her: Skilled GirlForce. As we move full speed into a digital era that is defined by rapid advances in science and technology – and face a mounting list of global issues that need innovative solutions – UNICEF has declared that now is the time to dismantle social norms that perpetuate these gender gaps and close them forever.

Jobs in science and technology are some of the fastest growing worldwide, with 90% of future jobs requiring Information and Communication Technology (ICT) skills.  However, one-fourth of young people – mostly girls – are neither currently employed nor in school or in training. In STEM, only 30% of female students choose to pursue science-related careers in higher education.

But many girls never make it to primary school. Right now, five million more girls than boys are currently out of school.

Girls face far more barriers than boys do at every stage of their lives, starting at a very young age.

And unfortunately, the lack of female role models, mentors, and decision makers only re-enforces existing barriers.

How We Can Inspire More STEMinists?

Our complex global agenda and its challenges – from climate change to rising hunger to emerging health threats – require all the ingenuity and brain power we can summon. As Deputy Secretary-General Amina J. Mohammed has said, “Without equality and empowerment, we will simply perpetuate today’s paradigm: trying to address all the world’s challenges with only half the world’s assets.”

The most promising solutions may very well lie in the minds of young girls, just waiting to be unleashed. We don’t have to look far to see this potential.

Miranda Wang, a 2018 UN Environment Young Champion of the Earth, and her lab partner Jeanny Yao, are pioneering a chemical recycling system that breaks down unrecyclable plastic waste.

Chebet Lesan, the Global Alliance for Clean Cookstoves’ Woman Entrepreneur of the Year, is tackling air pollution through an eco-friendly cooking fuel for low-income families in Kenya.

And Alexandria Lafci, co-founder of the nonprofit New Story, is transforming slums into sustainable communities by harnessing the power of 3D-printing technology (see her talk at the Social Good Summit).

When 193 Member States signed on to the 17 Sustainable Development Goals, they committed to inclusive, equitable education (SDG 4), gender equality (SDG 5), and leaving no one behind.

While we’ve made progress in many of these areas, we have serious work to do.

Here’s what we can do to be better Feminists and STEMinists for girls everywhere:

At the Nobel Prize press conference, Strickland said, “We need to celebrate women physicists because we’re out there.” Indeed, and the pathways and principles to ensuring more girls can thrive in science, technology, engineering and math endeavors are out there, too. 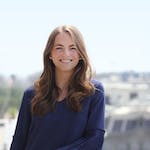