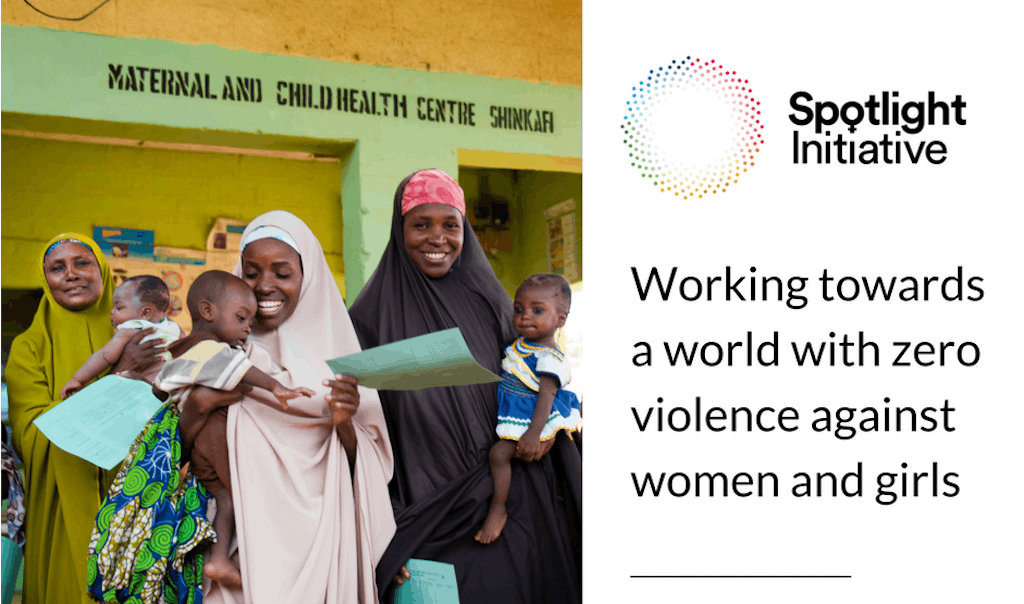 One in three women worldwide suffer violence in their lifetimes. This staggering global data point makes clear that violence against girls and women is pervasive and a major obstacle to the fulfillment of girls’ and women’s human rights.

Violence keeps girls and women from living life as they choose and prevents them from fully participating in society. Consider the millions of girls and women forced into child marriage, sold into human trafficking, and subjected to physical, sexual, mental, and emotional abuse.

Gender-based violence affects everyone – across all generations, nationalities, communities, and spheres of our societies – and we all have a role in ending it; a duty to resist becoming unwitting bystanders to one of the most persistent and pervasive human rights violations.

The Spotlight Initiative, a multi-year partnership of the European Union and the United Nations launched at the UN General Assembly last fall, is named for the focused attention it will bring to all forms of violence against girls and women, and created in the spirit of action and cooperation. Everyone has a role to play.

At an event at the 62nd Commission on the Status of Women, representatives from the EU and the UN shared encouraging updates about the global, multi-year initiative since its initial launch last fall and shared a new interactive campaign, #HerStoryOurStory.

Here are three ways the Spotlight Initiative is working to end violence against girls and women everywhere:

Listening to Girls and Women

Gender-based violence cross-cuts nationalities, generations, communities, age, ethnicity, and disability, yet despite its prevalence, it remains largely unseen and unheard, in part because it most often happens within homes and families, settings where girls and women should feel safe and secure. Some national studies show that up to 70% of women have experienced physical and/or sexual violence from an intimate partner in their lifetime.

To create a safe space for women to talk about violence and discrimination, the Spotlight Initiative undertook a wide and inclusive consultation process last fall, meeting with women in New York, Brussels, Panama, Dakar, Nairobi, and more, listened to their stories, and collected much-needed data to design a framework for sound policies.

In the coming months, UN country teams, governments, civil society, and others will use the stories and data collected from the consultation process to design large-scale, high-impact national programs. The Spotlight Initiative will work at the country level to strengthen policies and frameworks, build institutions, and collect disaggregated data – all with a key focus on prevention.

Several countries in Latin America have been chosen for initial implementation, including Guatemala, Mexico, El Salvador, Honduras, and Argentina. Outcomes and lessons learned from these countries will provide the UN and partners the opportunity to scale up successful approaches to others.

Beyond policy change, the Spotlight Initiative aims to change the public dialogue around violence by challenging stubborn norms and inequalities, and as well as harmful behaviors and attitudes.

The new #HerStoryOurStory campaign, launched on International Women’s Day, seeks to inspire everyone, individually and collectively, to speak out against discrimination and abuse.

The campaign features an online video game that puts players in the shoes of different family and friend characters, challenging them to consider how they would react in the nuanced situations that can lead to gender-based violence. Although the four main girl characters – Kali, Mina, Sarah, and Ava – live in different parts of the world, players quickly discover all four girls face the same vulnerabilities, and the same moments to recognize and prevent violence against women before it happens.

Violence against girls and is not inevitable. We can end it, and the UN and its partners are leading the way, creating, as Deputy Secretary-General Amina Mohammed has said, a world “in which women and girls can walk free and tall and in safety and in dignity.”