When Manyang Reath Kher was just three years old, he lost everything.

Manyang was one of 20,000 “Lost Boys of Sudan,” forced to flee a brutal civil war in what is now South Sudan — a war that took the lives of his father, brothers, and sisters. But he considers himself lucky. After fighting for survival in refugee camps plagued by malaria and other deadly diseases for some 13 years, he received the opportunity to come to the United States and start a new life. Although Manyang had to adjust to a new home, he refused to forget the people he grew up with. “I just didn’t want to forget them because my life was changing. I wanted to go back and give them something,” he says.

Now, Manyang is a champion with the United Nations Foundation’s Nothing But Nets campaign to end malaria, and he runs 734 Coffee, a business that gets its name from the source: 7˚N 34˚E are the geographical coordinates for Gambela, a region in Ethiopia where more than 200,000 displaced South Sudanese citizens now live. His business gives back to refugees by growing coffee in the area — thus providing decent work opportunities — as well as giving proceeds to support refugee education.

We interviewed Manyang as part of our Protectors of Progress series, which highlights the stories of everyday individuals across the globe who are stepping up in their communities to help realize the promise of the Sustainable Development Goals (SDGs), a global roadmap for the future adopted by all UN member states in 2015. While there is a lot of work to be done to achieve the SDGs, advocates like Manyang show that it’s possible to protect — and advance — progress when we take action.

You have a really interesting backstory. How did that experience lead you to where you are today? 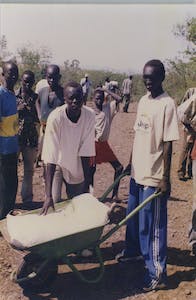 MK: Well, my childhood didn’t start with very many blessings, but through a lot of help, my life got promise. I was born in southern Sudan and became a refugee at the age of three. I was one of the so-called “Lost Boys of Sudan.” Basically, we lost everything. We lost health care, we lost our country, we lost our homes. We lost, most importantly, the love of our own families — my father, brothers, and sisters. It took me 17 years to meet my mother again.

I lived in a refugee camp for 13 years. When I was given the opportunity to come to America, I wanted to just leave that camp because I thought I was going to die in the dirt in that refugee camp. There was rain all the time, and the camp was dirty. There were hygiene issues, and there was malaria. I had been sick many times there. It was one of the hardest things to just be a camp person. So when I came [to the U.S.], I wanted to do better for myself and I wanted to do something to help people.

What inspired you to start 734 Coffee? What was the moment where you decided, I’m going to start this coffee company?

MK: When I left my refugee camp, I was tired. I just wanted to leave the camp and come to America, and do two things only: I wanted a better life for myself, and… I was so skinny — really, really skinny….I wanted to get fat. I wanted to get fat and feel good. When I came here, it was hard to get fat. I remember going to gyms and them telling me to eat chicken, fried chicken, McDonald’s, all those foods that I was eating just so I could get fat. And it never worked.

Finally, when I actually gained weight, I started thinking personally, “What did I contribute to this world? What do I really want to do? Do I want to just come to America to eat a lot, get fat, and not do anything? Forget all my friends?”

A portion of your company’s profits support refugee education. Can you tell us how that works, and why you decided to give back in this way?

MK: Imagine you live in a refugee camp. Just imagine your child there. They go to kindergarten, high school, and finally graduate, and they apply to college. And then they find out they can’t pay for college because they’re a refugee. It hurts you and hurts your family. You spend your entire life trying to make your child’s life better.

When I come back and tell them, “I can send your child to school,” it is one of the most amazing things for me. I’m so happy that I can do that — that 734 can do that. That’s why I do that. Somebody helped me. I didn’t get to America by walking. Somebody gave me the opportunity that I have today. Somebody stood for me when no one else did, and that’s why I give back with things I can give out.

734 not only supports refugee education but also provides much-needed employment in the region. Why is SDG 8 — decent work and economic growth — so important in the region where your coffee is grown?

MK: A lot of people see refugees and think, “Let’s give them a handout and food.” But refugees can work. They have hands, eyes, and they can think. They can make their own life. That’s why 734 is creating job opportunities and telling their stories. If you look at the 734 cycle, we create jobs in the region. So if you don’t want refugees coming to other countries, you can still support us because we’re creating job opportunities over there. 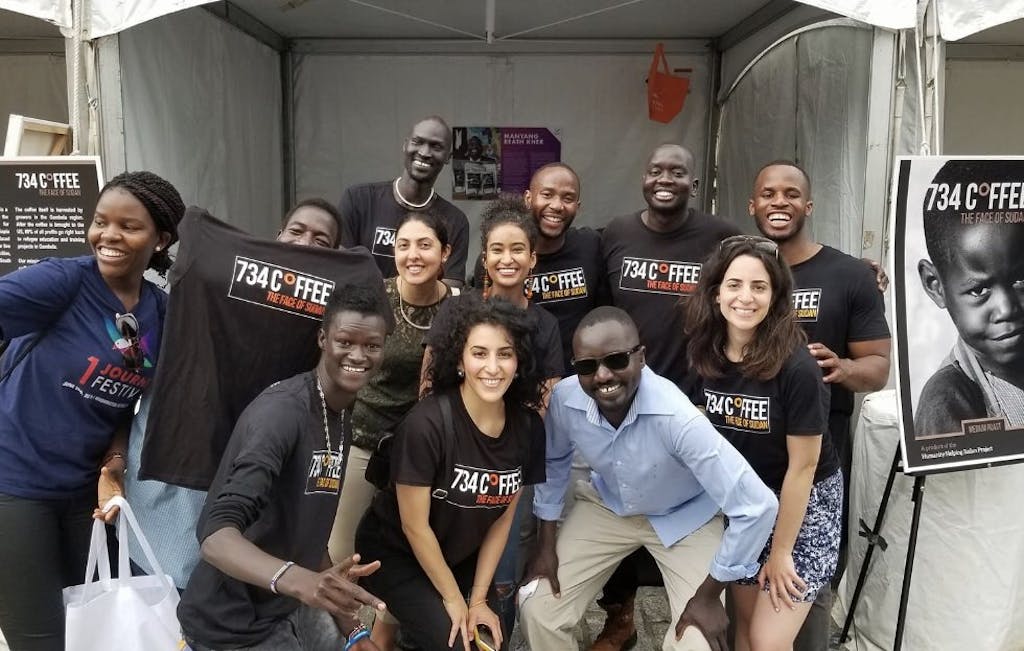 Can you tell us about some of the stories that you share on the coffee bags, and some of the people that you’ve met through 734?

MK: This girl I met, her name is Yamal. She wants to be a journalist. She’s a 13-year-old girl. When we told her we were going to give her a scholarship to go to college, it brought a greater joy to her and her family. And it also gave me joy that I and 734 can do this.

There’s another guy on my website, his name is Jonson Dwayne. We were able to help send him to school after he dropped out of college. We paid his full scholarship to go to college.

We have a kid who is paralyzed, but all he’s ever wanted is to be a doctor. And we sent him to school so he could pursue his dream. That’s why we do what we do. That’s why 734 is important.

Going back to your experience as a refugee, how did humanitarian agencies like the UN Refugee Agency (UNHCR), UNICEF, and the World Food Program (WFP) shape your experience?

MK: Well, they are the people you see first. The first people I saw were UNICEF and UNHCR — they run the camp. They are responsible for the camp. You know, despite all the challenges, I’m a proud advocate of the UN. If there was no UN, how would I live in a refugee camp? Even as hard as living in a refugee camp is, it gives you shelter. It gives you a place to live and a place to stay for a while.

Those 13 years taught me a lot of lessons that I will never forget in my lifetime. It also made me who I am. And that’s why I respect them, and I honor them. I respect what they do for people. I want to contribute to what they’re already doing for people in a way that I know how to do. That’s why I do the things I do.

What’s your message for people who don’t understand the refugee experience?

MK: People don’t see refugees as people who contribute to society. But they use their phones every day — they have iPhones, and they have Google. You know, the person who invented iPhones, Steve Jobs, his father was a refugee from Syria. So in your iPhone, there’s refugee in it. Google, the thing that people use every day, one of its co-founders is a refugee. There’s a lot of contribution that is done by refugees in society. We just never really mention it in a positive way where people can understand better. And that’s why America contributes a lot to this.

People who are tired of persecution, they come here and they want a better life. They just want to function in society. They want to help and give back and just be simple citizens. They want to feel like their lives are worth it. You want your life to be meaningful. People want a meaning to what they contribute to society. That’s what people who don’t understand the refugee experience need to learn about. We create jobs. We come here, and we work really hard every day and help society.

If you look at 734 Coffee, the people who designed the bag, the people at the warehouse, the people who drive the trucks — all those things are jobs. And these jobs were created because we came here for a better meaning of life. The people who work in our warehouse are not just simply at a job. They’re feeding their families. That’s what the job means to them. We all benefit from each other at some point. And I think that’s why you should care. You will learn about their story, learn how to work together, and have a better future with these people.

One final question — and this is a tough one: What’s your favorite blend of 734 Coffee?

MK: That’s not a tough question. I’m the coffee guy! I like the house-roasted medium because it has a blend, it’s sweet, and it’s smooth. The coffee is Grade A, and it’s been grounded real fine. If you pour it down, you can actually smell the smoothness of 734 before you’ve even tasted it.

Join the Nothing But Nets campaign to end malaria, a disease that disproportionately impacts refugees.

If you’re based in the U.S., write to your member of Congress and tell them why you stand #WithRefugees.

Inspired by Manyang’s story? Read about 734 Coffee and its campaign to #RedefineRefugees.