But this high school student and self-proclaimed “huge nerd,” from Hood River, Oregon, is by all accounts a rockstar advocate for gender equality and education. After founding a Girl Up Club at her school in 2017, Eva and her club have gone on to raise over $13,000 to support girls’ education in Malawi and Guatemala, worked with hundreds of girls to turn a refugee education bill into law, and even testified before Congress about school safety.

We interviewed Eva as part of our Protectors of Progress series, which highlights the stories of everyday individuals across the globe who are stepping up in their communities to help realize the promise of the Sustainable Development Goals (SDGs), a global roadmap for the future adopted by all UN member states in 2015. While there is a lot of work to be done to achieve the SDGs, advocates like Eva show that it’s possible to protect — and advance — progress when we act for the world.

How did you end up testifying before Congress?

Eva Jones: I was at a town hall with Senator Ron Wyden directly after the Parkland shooting. I told him, “I want to talk to you about Girl Up’s bill on education for refugees, but honestly all that’s on my mind is that we are really scared. I haven’t had class because all my teachers have just been talking about school shootings, what we’re going to do, and how scared they all are for us.”

He then ended up inviting me to testify in Washington, D.C. the following week on gun violence.

What surprised you about that experience testifying before Congress?

EJ: Honestly, I cried so hard in my hotel room the night before. I was crying about these pants, “These pants are wrong!” Whenever you have a thing, and you think it’s about the outfit, it’s not actually about the outfit. It was much more.

I was so worried and felt like I didn’t know enough about this issue. I was really so nervous about doing poorly or misrepresenting the 50 million school children in the U.S. that I was speaking for. It was so stressful, but when I got up there, everyone was like, “That was so amazing.” And I was like, “Really? Because I was so scared the whole time.”

Although she testified about school safety, Eva originally attended her senator’s town hall to discuss another issue affecting young people: girls’ access to education. She became one of hundreds of girls across the U.S. to successfully lobby lawmakers to pass the Protecting Girls’ Access to Education in Vulnerable Settings Act, which was signed into law on January 15, 2019. The bill will ensure that the educational needs of girls and women are considered in U.S. foreign assistance programs.

Can you tell us about your advocacy work for the Refugee Education bill?

EJ: At the Girl Up Leadership Summit in 2017, I learned about this bill, and I had never done advocacy ever. Advocacy is a super new thing to me — it still is. And so it was just another problem that could be tackled.

The following year, I went to every town hall that was in our area and asked our senators and our representatives to co-sponsor this bill. There was one meeting with Senator Merkley, and I didn’t get my question called, so I just walked up to him and was like, “Hi, I want you to co-sponsor this bill.” He said, “Ok, here’s my staffer, and he’ll get it all sorted with you.” And I was like, “Oh, that worked?! I could convince you a lot more!”

So, they ended up co-sponsoring the bill, and we ended up sending 300 letters to our members of Congress about the bill and about other bills and issues. 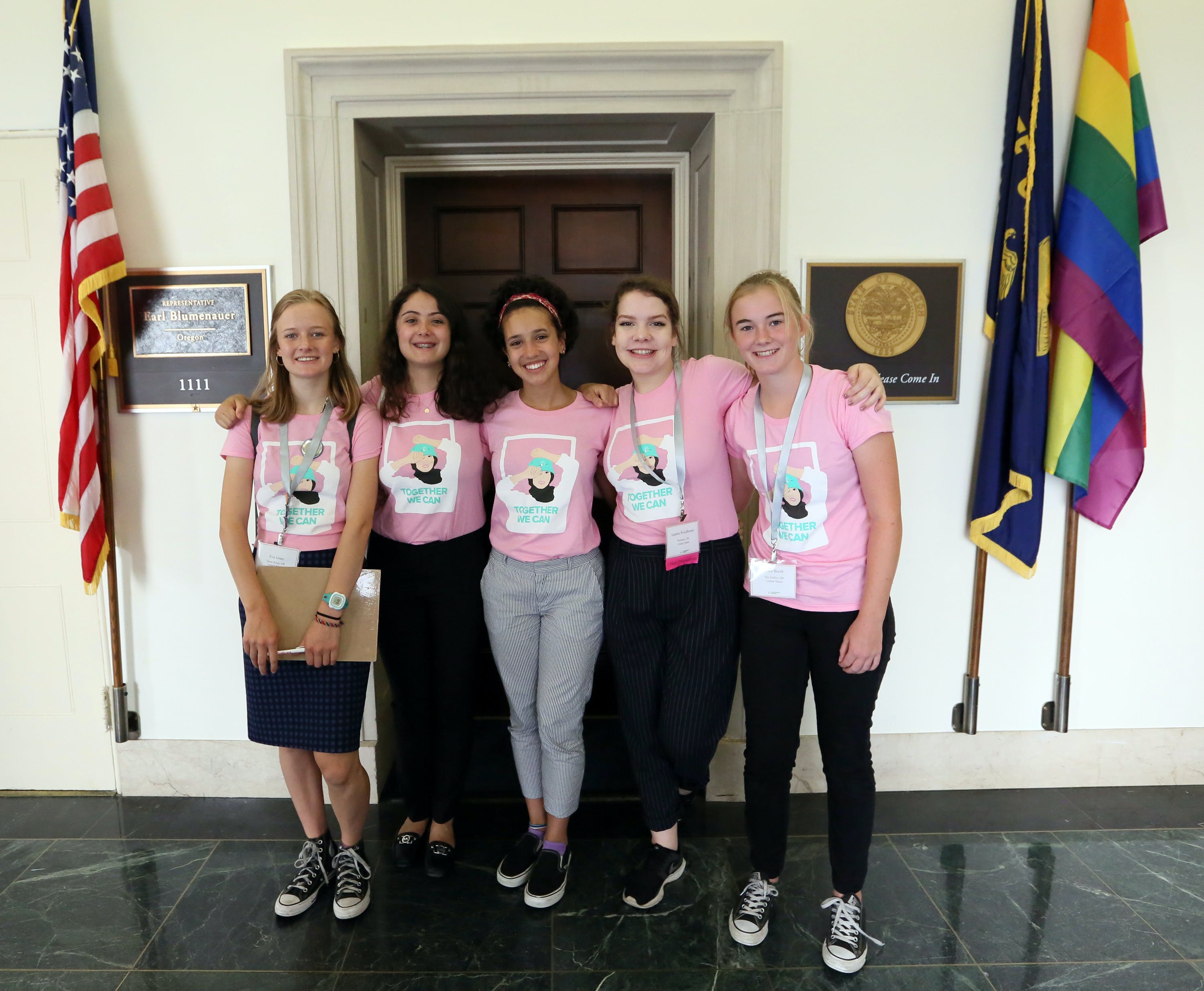 HOW DID YOU FIRST GET INTERESTED IN GENDER EQUALITY?

EJ: I’m a very curious person and I would notice inequalities and naturally be like, “Wait why is this happening? I don’t understand. Why are women disproportionately affected by violence? Why are all these things happening to women and young women?”

There were just all these things I would notice in my own life, and I did more and more research because I’m a huge nerd — I just like research everything. So, I started to get more educated and involved, and I realized gender equality was something I was super passionate about. Not just in my own community, but globally.

When you think about all the global problems we’re trying to solve like climate change, poverty, and violence against women, we can’t do that if we’re only empowering 50% of our population.

Empowering girls is what the Girl Up initiative is all about. Founded by the UN Foundation in 2010, Girl Up positions girls to be leaders in the movement for gender equality – creating real policy change at local and national levels, helping raise millions of dollars to support United Nations programs that reach tens of thousands of girls around the world, and much more. For Eva, joining the movement was a natural fit for her passions.

How did you first hear about Girl Up and what inspired you to join?

EJ: It’s actually kind of a funny story. My mom saw in a magazine about the WiSci Camps (focused on STEM education), which is so 20th century I feel like. So I applied and I didn’t get in, but I started doing more research on the UN Foundation and the programs they have. And I was like, “Wow, I mean I didn’t get in but this Girl Up thing is super cool — we should start a club!”

When you decided to launch the club at your school, how did you enlist your classmates?

EJ: We made Girl Up cookies at every event we had, so a lot of times that’s why people would stop at our booth. People were like “Dang, you guys’ cookies are so good.” So yeah, it started with my friends and as we put on more events and had more success, other people joined.

And I think we really hit the jackpot in terms of timing after the 2016 election. I think people were really distraught, especially over the future and how we can make change. We started right after that in 2017, and so I think people kind of saw our club as a beacon of hope, which, wow, sounds so cheesy but I’m saying it anyway.

From there, Eva’s club got to work putting on fundraising events with local businesses, including feminist movie screenings at their local movie theater. One of the causes they raised money for was Girl Up’s SchoolCycle campaign, which provides bicycles to girls in Malawi and Guatemala to help them access education and stay in school. 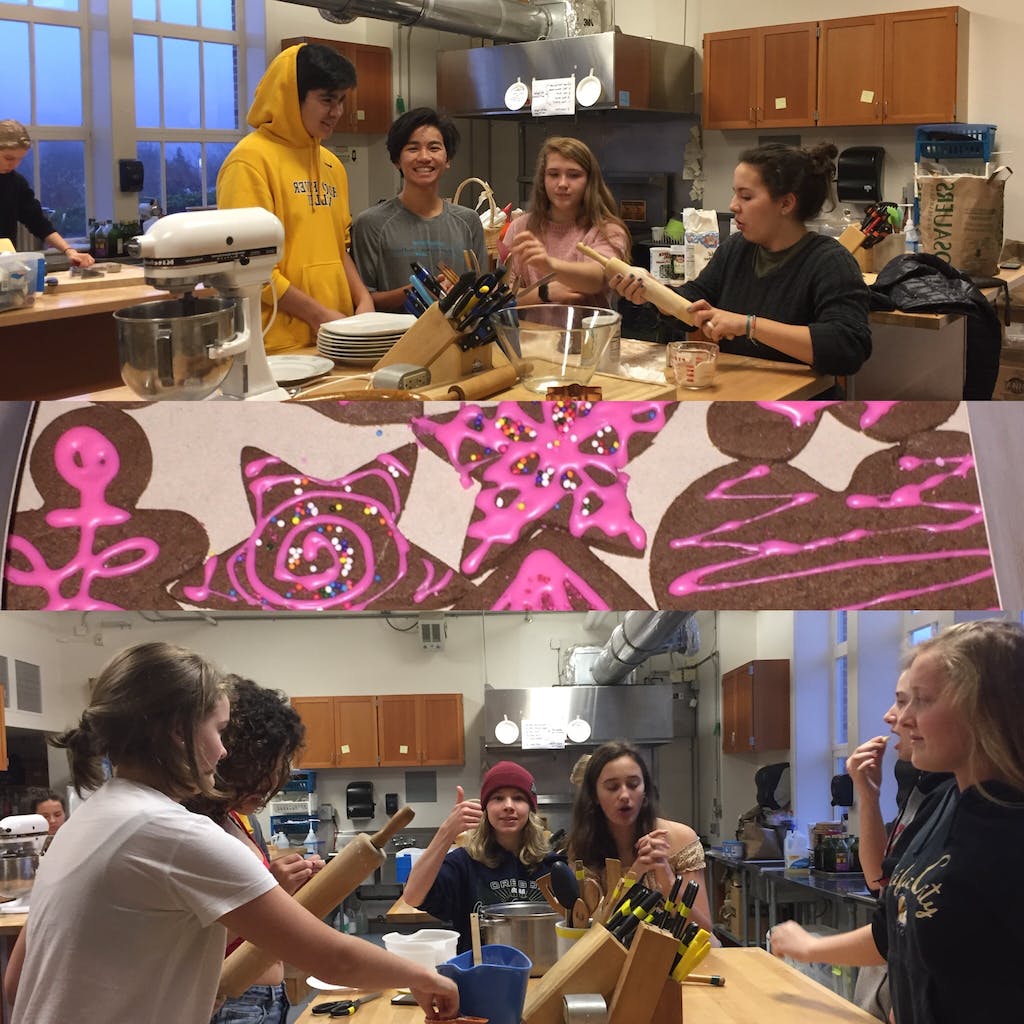 Tell us more about how you fundraised for SchoolCycle? How did your club manage to raise $13,000?

EJ: At the leadership summit, I saw a presentation from one of the SchoolCycle supporters, and I thought it was super empowering. And it was so crazy that just with $125 we can elevate a girl’s life and change it for the better. We were able to donate over 100 bikes!

Our first fundraiser was sort of a collaboration with a local coffee roaster, and so we sold bags of coffee, we made little bags, and we packed them ourselves. They would roast it and give it to us for half price, so we sold it for $16 a bag and we got $8 per bag and ended up raising almost $5,000 from just that. 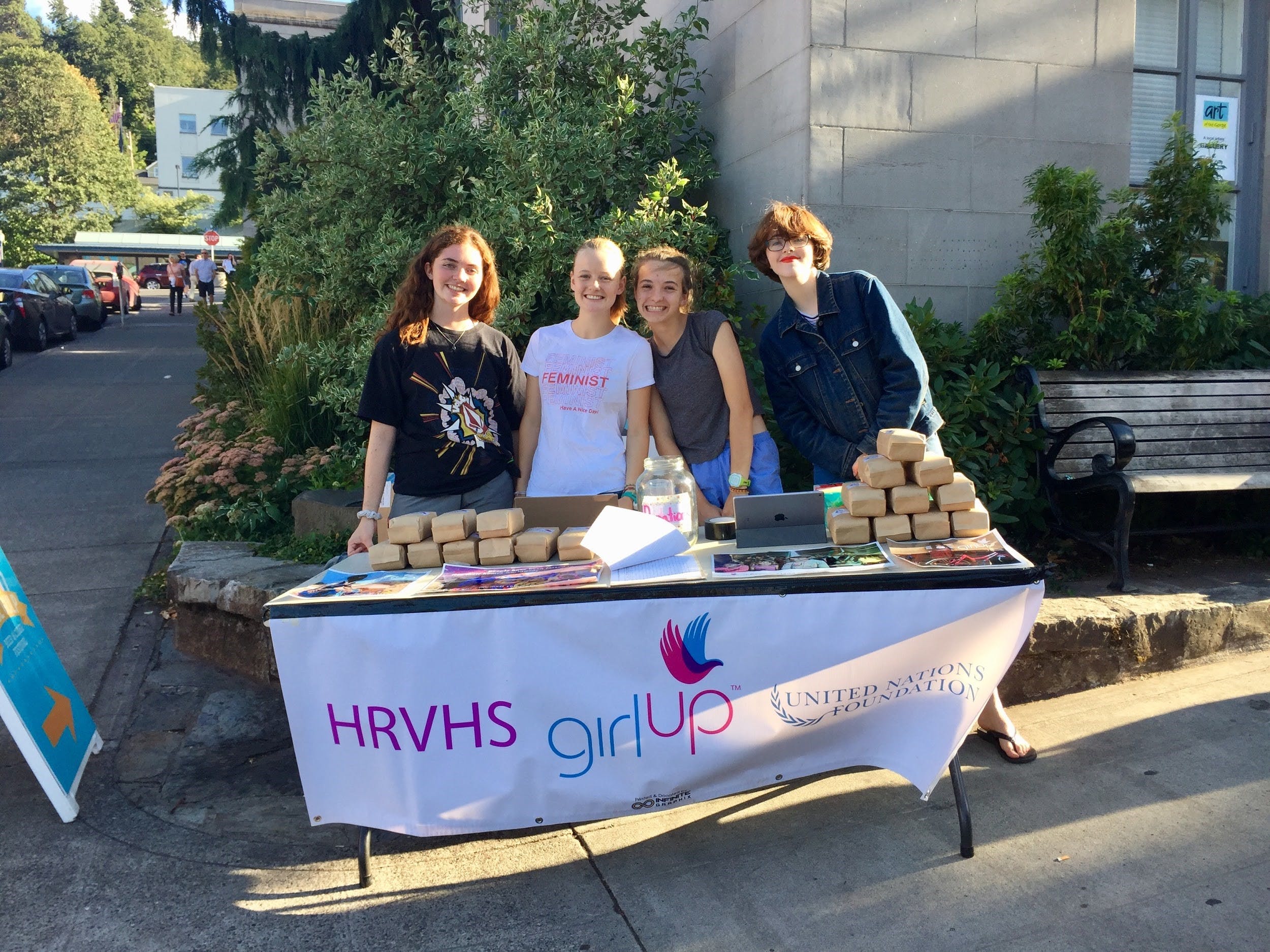 Why do you think your club has been so successful with its fundraising efforts?

EJ: One reason it’s been so successful is when people see that community support, they’re more willing to come. When we have 30 sponsors from all over the gorge, they are telling their customers about it. It’s like instant publicity. And so for our events, when we have all these sponsors, people going to those stores all of the sudden feed into it, and our reach becomes a lot larger. But I think the reason that local businesses are so keen to donate is because Hood River is a super small town of about 7,000.

Also, I started fundraising in kindergarten. My mom is a saleswoman. Every single year in elementary school I was the top fundraiser.

What does your mom think of all this?

EJ: My mom loves it – she’s so into it. She is the advisor for our club, and she works really hard  to support us and help us along.

I always tell people before they meet my mom, “I want to warn you: She is so optimistic, it will kind of hurt you. It feels like you’re looking at a really bright light you know,” and I realize like, “Oh God, that’s what people think about me!”

What would you say to other young people about the importance of advocacy?

EJ: Whatever you believe in, just follow that. Just do it and just jump in. With girls, we’re sort of in this position where we’re not given a voice in the conversation. We need to make it for ourselves — and lead the conversation.

And I think that everyone can make the change they want to see in the world if they set their mind to it. If they’re determined to dedicate their life to it. I think I’m cautiously optimistic — well not even cautiously — I’m SO optimistic. I’m a person who genuinely wants to live in an equitable, clean society, so if we can get everyone on board, we can make it happen. 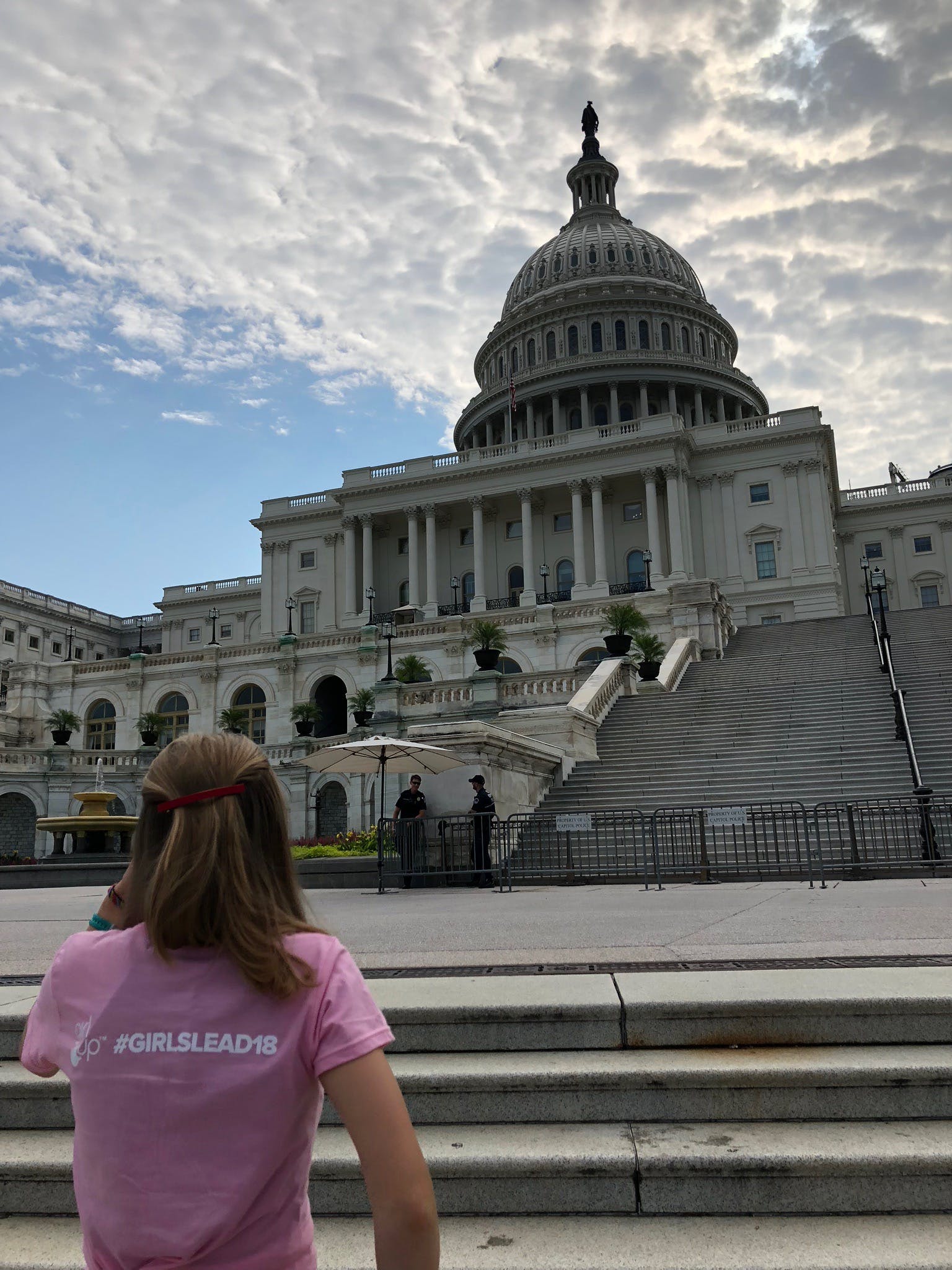 Just focus on what you can change, and how you can create a positive change in your world. And then jump off from there.

Inspired by Eva’s story? Get involved with Girl Up and help advance girl’s education, leadership, and opportunities so we can achieve gender equality and the Sustainable Development Goals.