2019 marked a milestone year in the ambitious global effort to achieve the Sustainable Development Goals (SDGs). Four years after all countries agreed to the framework, the United Nations hosted the first high-level check-in on progress. Government leaders came together to take stock, reinvigorate commitments, and determine the path forward. The gathering elevated and connected actors working on issues across the SDGs. New partnerships were formed, and important initiatives launched.

Yet despite the first four years of effort, we know we are substantially off track to meet the Goals in full and on time. As we embark on the next decade—the ten-year countdown to realize the Global Goals—2020 must serve as a springboard point where our urgent, collective action pushes the world onto the path to success.

Here are some of this year’s highlights. 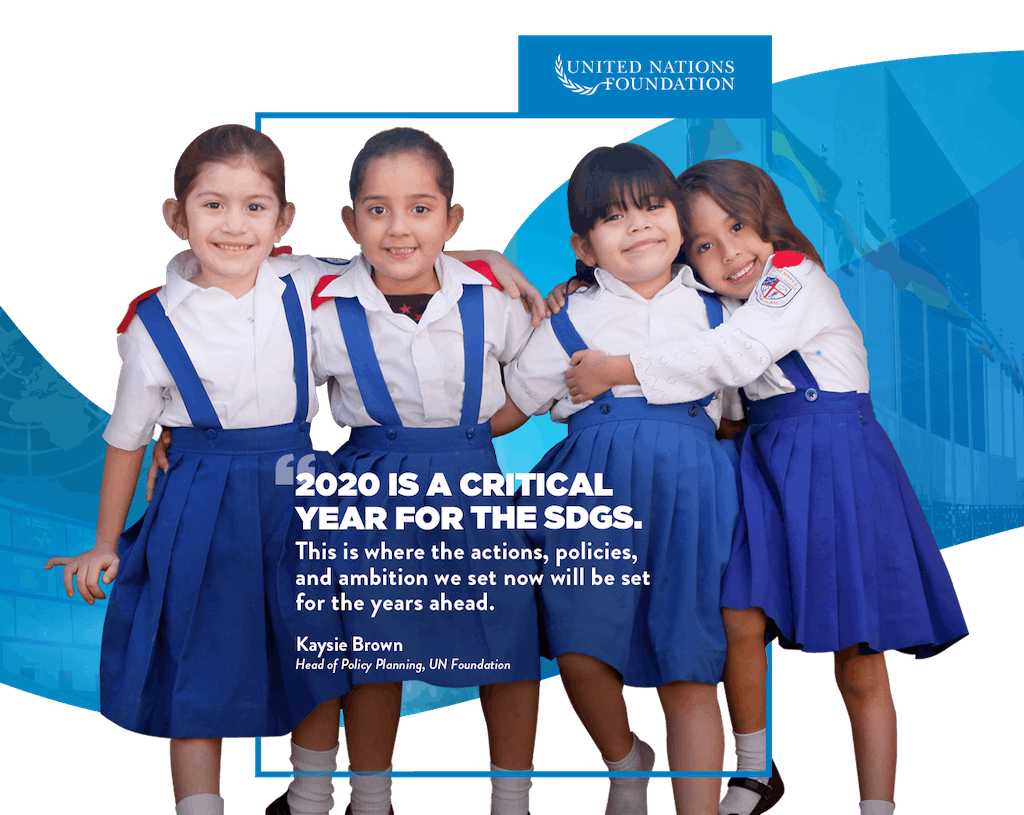 1. Countries are aligning with the SDGs and making new commitments for progress

Countries continue to show steadfast support of the SDGs, with a growing number developing SDG strategies and evaluating their progress. Since 2015, over 140 countries have presented a Voluntary National Review at the United Nations. Nearly every major economic power and G20 country has volunteered to report, with some providing multiple updates. This year 47 countries reported on their work toward the Goals, with seven for the second or third time. At the UN General Assembly in September, world leaders renewed their pledges during an SDG Summit and stakeholders registered more than 100 “acceleration actions” to make progress across the Goals, from climate to poverty reduction commitments.

2. Local actors are leading by doing

Local entities are increasingly driving action on the SDGs and are often the most effective place to implement policy and test new approaches. New York City’s Voluntary Local Review of its SDG efforts last year sparked a global movement. At the UN in September, more than 20 cities committed to advance the SDGs and track progress through their own voluntary reviews. Universities are also stepping up their work on the SDGs, and this year convened around a University Global Compact.

We also saw subnational actors embracing the SDGs as a collective framework and common objective. Local2030, a UN-supported network that localizes the SDGs by connecting local and regional governments, businesses, and community organizations, has endorsed the creation of local SDG ‘hubs’ around the world to further drive local and regional progress. This year, officials from small island states established the Local Islands Network Hub to champion SDG progress on islands. And a Peace in our Cities campaign was founded by mayors, citizens, and city governments across the globe who are dedicated to Goal 16: promoting peace and justice.

Meeting the SDGs requires substantial and long-term financial investment and a reorienting of markets. As with last year, in 2019 we saw the private sector and the investor community continue to advance the SDGs and bring sustainability into core operations. Executives are increasingly realizing that environmentally and economically sustainable business practices are vital to long-term viability. The Business Roundtable underscored sustainability in its statement on shifting corporate value from shareholders to stakeholders, including customers, employees, communities, and suppliers. With the UN, 30 private sector leaders formed the Global Investors for Sustainable Development Alliance, committing to unlock and catalyze long-term investment in sustainable development. Separately, a group of 130 banks from 49 countries representing more than $47 trillion in assets signed off on the UN Principles for Responsible Banking to accelerate the banking industry’s contributions to the Paris Agreement and the SDGs.

While laudable, these commitments must translate into real change. The World Benchmarking Alliance (WBA) offers a tool to assess companies’ impact toward various aspects of the SDGs vis-à-vis their peers’ and to make that information free and accessible to all. Launched last year, the WBA has since released a human rights benchmark, a seafood benchmark, and a benchmark ranking automobile companies’ effectiveness in meeting the Paris Climate Agreement’s targets.

4. We are making progress, but the world is off track

What does this encouraging engagement mean for SDG progress? Four years in, have we improved people’s lives and created a healthier, more prosperous planet? Here are the bright spots:

Despite these accomplishments, 2019 was also a clarion call that not enough is being done on a large enough scale to shift trajectories and to fulfill our collective promise of a more sustainable and equitable world:

Even with the immense gains, progress on extreme poverty is slowing as it becomes concentrated in places facing grave challenges. Extreme poverty is transforming into a “last mile” issue, requiring targeted interventions and new approaches to overcome the gap. Progress on reducing income inequality has stalled in a slowing global economy as large, systemic inequities persist.

2020: Jumpstarting the decade of SDG action

The year 2020 is the start of the ten-year countdown to the deadline for the Goals. We have a decade to deliver for people and for planet. The actions, policies, and ambition the world embraces today will determine whether we can achieve this bold agenda in the years ahead. The stakes could not be higher. The SDG Progress Report and a new UN report by 15 independent scientists around the world demonstrate that greater innovation is critically needed.

There is still time to align our work today to move us forward on a sustainable path through 2030.

Expect to see greater SDG adoption and focus by governments large and small, organizations, businesses, communities, and individuals. The SDGs are a galvanizing framework for people and institutions across geographies, communities, and sectors. This alignment reflects a call made by the UN Secretary-General for a decade of action to deliver the SDGs, through more urgent and wide-reaching efforts at every level.

Through this widespread alignment around the Goals, municipal leaders and local communities will continue to play a pivotal role keeping the SDGs at the forefront of local agendas, with more cities undertaking voluntary local reviews and community coalitions tackling issues around gender equality, violence, and migration. In addition, schools and universities will increase their work toward and progress against the Goals.

Engagement by the private sector will continue to deepen through the work of the Global Investors for Sustainable Development Alliance and the Ceres Climate Investors Summit. And the WBA will roll out its SDG2000: companies identified as most influential to the systems within which they operate. The international community will identify creative solutions, partnerships, and policies that build on existing knowledge to drive societal transformations. This effort will be complemented by a push to strengthen and build current data to create a more accurate picture of progress and challenges, and to better leverage the SDG framework, focusing on what is most needed.

In 2020 we and other organizations will answer this call through a Decade of Action campaign to spur meaningful commitments to close the gap between where we are and where we need to be to deliver the Goals in full and on time. This campaign will emphasize the necessity of positive momentum on climate, gender, and inequality.

This is an all-hands-on-deck effort. No one has all the answers. Together, our vision, will, and ideas have the power to propel us to meet these crucial Global Goals by 2030. Our world and our future depend on it.

What the Science Says on the Sustainable Development Goals