Why We Celebrate: Global Leadership and Global Progress

Why We Celebrate: Global Leadership and Global Progress 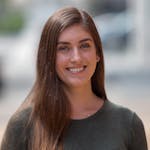 Honorees, speakers and guests on stage at We the Peoples on November 3, 2022, in New York. Photo: Jason DeCrow / United Nations Foundation

On the eve of its 25th anniversary, the UN Foundation recognized changemakers and trailblazers whose work reflects the values and aims of the United Nations at its annual Global Leadership Awards in New York City. Catch up on some of our favorite moments from We the Peoples 2022.

UN Foundation President and CEO Elizabeth Cousens set the tone for an evening of powerful speeches and inspiring calls to action as she kicked off We the Peoples 2022. Named for the opening words of the UN Charter, the Foundation’s annual Global Leadership Awards recognize extraordinary individuals and organizations whose passion and dedication embody the UN’s values and whose impact furthers its vital mission: to create an equitable, peaceful, and more sustainable world for everyone, everywhere.

This year’s honorees were recognized for wide-ranging work that spans the globe — from small island states like Barbados and Tonga, to South Africa. In ways as diverse as their geographies, they are working to save our planet, foster peace, and expand agency and opportunity. Above all — they inspire hope.

Throughout the evening, honorees addressed the audience of diplomats, business leaders, advocates, and activists. They were joined onstage by high-ranking UN officials, UN Foundation board members, and longtime partners who echoed and reinforced their calls for courage and change. 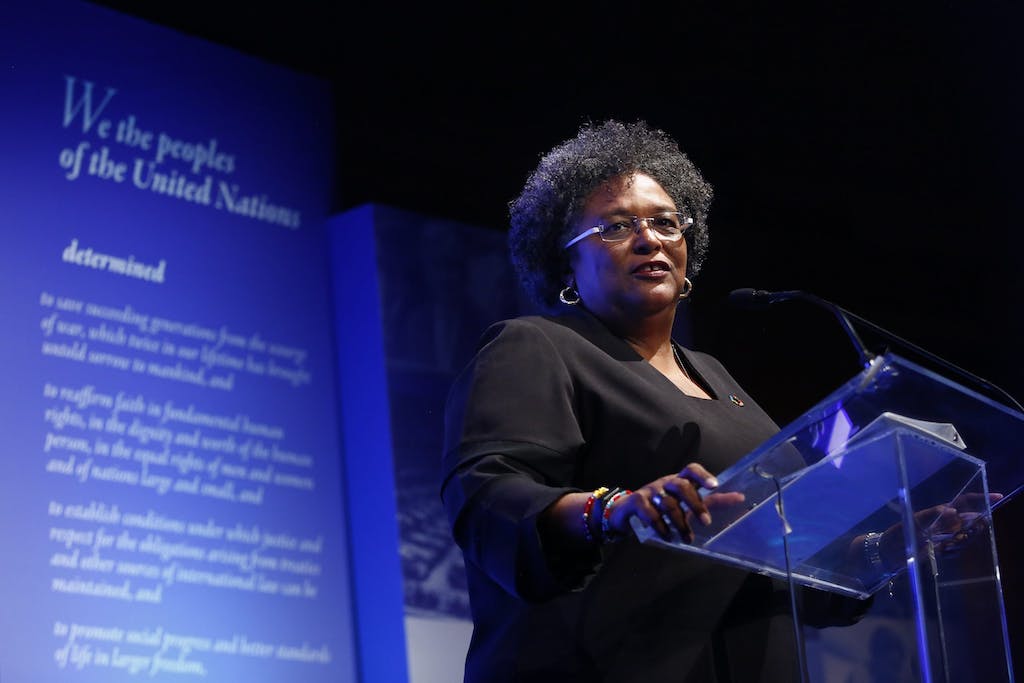 Everyone who spoke — honorees, presenters, and partners alike — was unequivocal about the severity and urgency of today’s global crises.

Since We the Peoples was last held in person in 2019, the stakes are even higher and the challenges more staggering: the war in Ukraine and subsequent food and hunger crises, the undeniable consequences of climate change, the once-in-a-century global pandemic that upended our world, and the stubborn inequities and injustices it exposed at every level of society.

That reality check resonated throughout the night. Prime Minister of Barbados Mia Mottley, after accepting the night’s marquee Champion for Global Change Award, lamented the “culture of contentment” that has allowed disparities of all types to continue to plague humanity — whether economic, regional, gender, or otherwise.

Speakers were just as firm in their resolve to continue pushing for progress. Despite recent setbacks and troubling headwinds, they committed to persevere because the costs of inaction are simply too high. Our planet, our health, our prosperity, and our well-being are at risk. 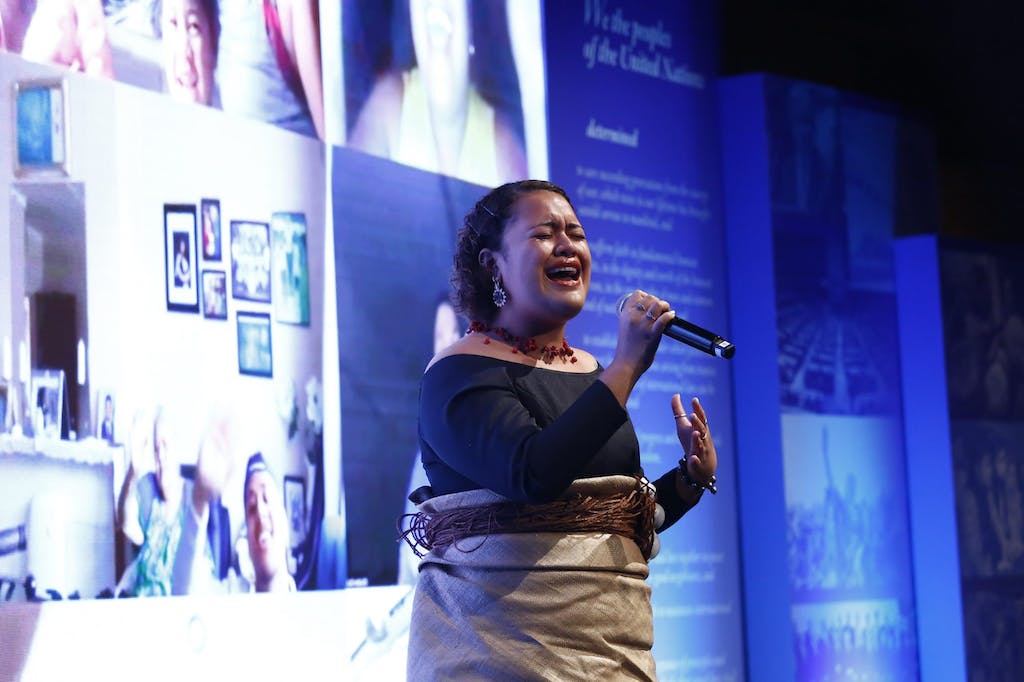 Mia Kami, an artist, storyteller, and climate justice activist from Tonga who received the SDG Vanguard Award, put the stakes in real terms by describing her experience on the front lines of a rapidly warming planet. She explained that, in Tonga where she lives, the worst is already happening: “We are not only fighting for our survival, we are fighting for our future.”

She uses art to bridge these divides and share her community’s stories and experiences with the wider world. Speaking from the podium, she said she also hopes her art serves as a powerful call to action to save our planet before it’s too late. Her performance of an original song, which she described as an anthem of hope and resilience, brought the audience to tears and to their feet.

Guests at We the Peoples not only heard of the honorees’ persistence in tackling the biggest challenges affecting people and planet — but the steep resistance they face. Dr. Natalia Kanem, accepting the UN Heroes Award on behalf of the United Nations Population Fund (UNFPA), pulled back the curtain. “From [UNFPA’s] earliest days, more than 50 years ago…we faced resistance.” And yet, the Executive Director of the UN’s lead agency for sexual and reproductive health and rights, assured the audience that, “UNFPA will persist. We will continue to speak out. And we will never stop until SDG 5 [achieving gender equality] is fulfilled.”

Holding Onto Hope in the Face of Uncertainty

“Despair should never be an option.”

Speaking of her experience growing up in an impoverished township in Cape Town, South Africa, Khadija Mayman’s voice echoed a call to action that rang clear throughout We the Peoples: hold tight to hope.

A young peacemaker with the Whitaker Peace & Development Initiative (WPDI), Ms. Mayman received the SDG Vanguard award on behalf of the organization’s founder, actor and philanthropist Forest Whitaker. Together with young peacemakers like Khadija, WPDI has helped 1.3 million children — including former child soldiers — cope with trauma and learn to thrive in their communities.

Delivering a video message to attendees, Mr. Whitaker affirmed that hope for a better future lies with young people: “I know that peace is fragile, but youth are both our present and our future. Through them, I know that peace can be achieved if we choose to strive for it, together.” 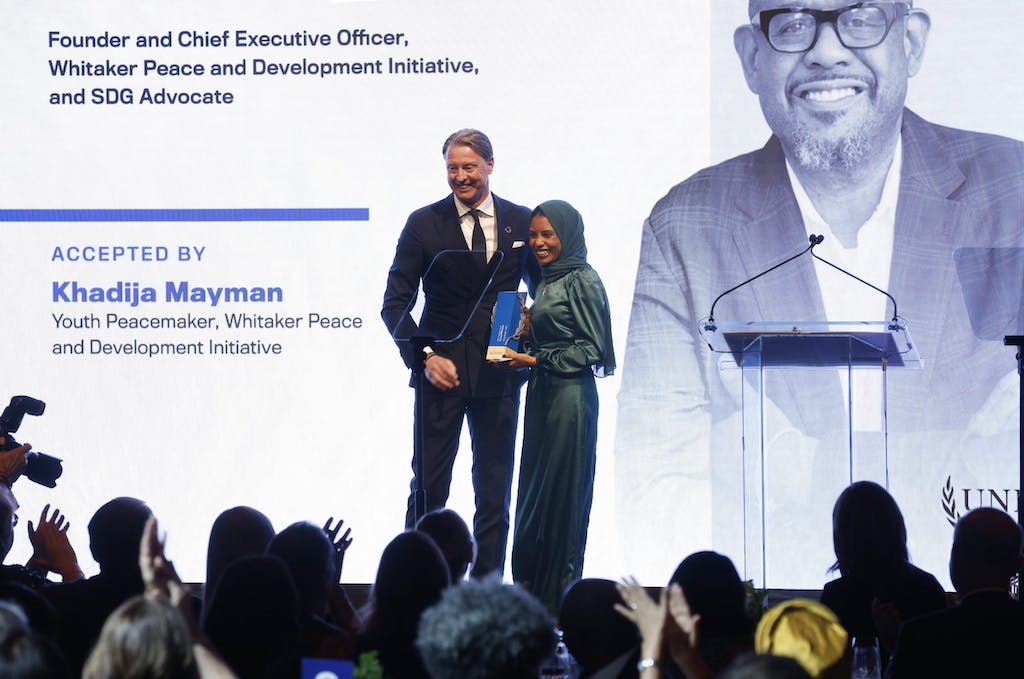 Standing with the UN

But in order to care for others, we first need to care for ourselves. That was the message from lululemon’s Esther Speck, Senior Vice President of Sustainable Business & Impact, and Nikki Neuburger, Chief Brand Officer, as they accepted the inaugural Goal 17 Innovation in Partnership award for Peace on Purpose | lululemon. The program has reached an impressive 8,000 UN frontline personnel from 137 countries around the world through both in-person and digital mental health and well-being programs.

Ms. Speck and Ms. Neuburger, in their joint acceptance speech, highlighted the UN’s response amid global upheaval, and the mental health awareness that’s increased as global challenges have multiplied. “We’ve seen unprecedented disruptions around the world, and the UN has been present in every crisis,” said Ms. Speck. “Mental health has become front and center around the globe.”

Laura Turner Seydel evoked the relentless energy and drive of her father, Ted Turner, Founder and Chairman of the UN Foundation, to do good, saying: “If you know Ted, then you know that he isn’t daunted by big challenges, he’s really energized by them.”

“He has always believed in his heart of hearts that everyone — ‘We the peoples’ — is capable of great things,” she continued. “And even greater things when we work together.”

The President of the UN General Assembly, Csaba Kőrösi, echoed this sentiment, noting that even in the face of many global crises, “we have opportunities for bold, decisive action to save our globe, and the peoples on it.” 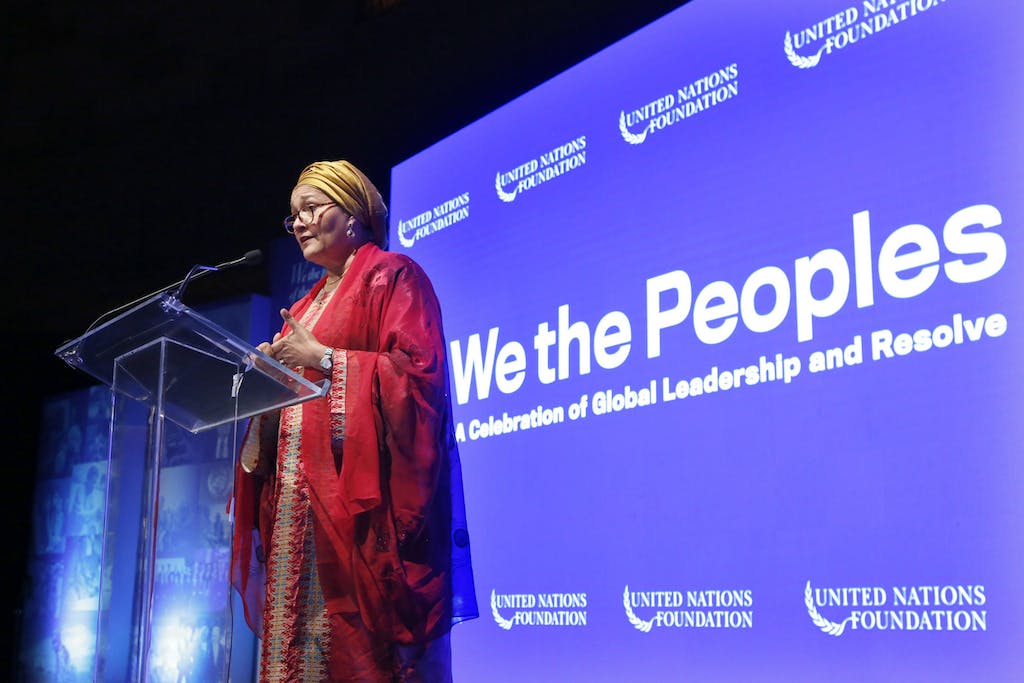 Everyone who took the stage at We the Peoples 2022 believes in doing the work, day after day, for as long as it takes to uphold and deliver on the promise of the UN Charter.

“Future generations are not going to remember today’s speeches, but they will remember the actions that we take,” said UN Deputy Secretary-General Amina J. Mohammed in her remarks.

But how do we reset the current trajectory? How can we reinforce global cooperation and reinvigorate the kind of collective problem-solving we need?

“We have it within us to make that change, but we must first summon the will to talk with each other,” she implored. “If this United Nations is to stand for something, then first and foremost, it must stand for ensuring that we don’t only talk, or talk at, but we talk with.”