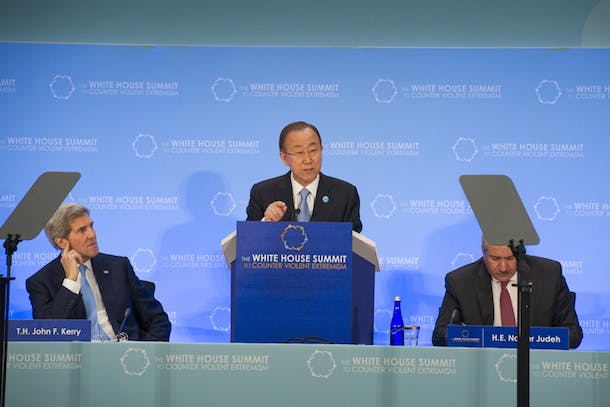 At last week’s White House-sponsored summit on violent extremism, U.S. President Barack Obama and ministers from more than 60 countries discussed what drives people to join terrorist organizations, and how to put a stop to it. The United Nations was featured in the center of the discussion — and in the next steps.

Of note, UN Secretary-General Ban Ki-moon emphasized that military action cannot be not the sole response to extremism. Protecting human rights and the rights of marginalized people must be at the forefront of global efforts to stop the surge of terrorism worldwide, he said.

“Poisonous ideologies do not emerge from thin air,” he said. “Oppression, corruption and injustice are greenhouses for resentment. Extremist leaders cultivate the alienation that festers.  They themselves are pretenders – criminals, gangsters, thugs on the farthest fringes of the faiths they claim to represent.”

The Secretary-General also stressed that improved political and economic environments will be as important as military efforts in combating extremism. “Military operations are crucial to confront real threats. But bullets are not the ‘silver bullet.’ Missiles may kill terrorists. But good governance kills terrorism,” he urged.

The summit closed with an address by U.S. National Security Adviser Susan Rice, who said participants agreed that an international agenda on extremism would be more finely tuned during the UN General Assembly gathering later this year.

Indeed, these global challenges need global solutions, and the UN is the ideal platform to continue this timely, urgent, and vital discussion. President Obama demonstrated this last September, when he chaired the Security Council with a clear objective: confronting the terrorist threat posed by groups like ISIL. Then, speaking from one of the world’s most far-reaching podiums, the President showed that the UN is the right forum to line up global commitments in the fight to stamp out extremism. His efforts at the UN achieved an important result: unanimous approval in the Security Council of a resolution demanding countries toughen their laws to prevent the flow of foreign fighters to terror groups.

As the President said in September, “This is the work that we must do as nations.” He upheld his word in Washington last week,  adding “We are united against the scourge of violent extremism and terrorism.” Advancing this commitment through the UN is once again the right path for the year ahead.