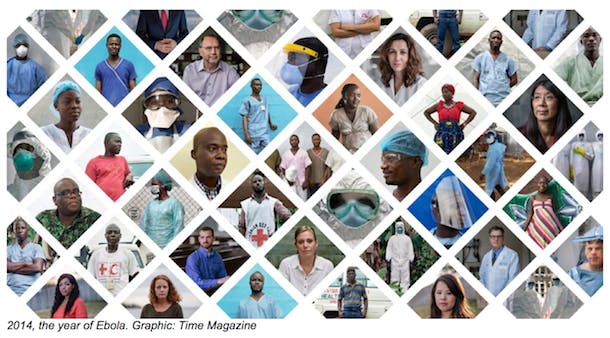 As we enter the New Year, we wanted to highlight a few new articles and resources that provide a powerful look back at key moments from the Ebola outbreak in West Africa in 2014. Some of these moments were missed opportunities, from which the global community can learn a great deal in future outbreak situations. Some of these moments marked progress and successes, which resulted from the robust international response that has been underway since September. Despite unprecedented and often unanticipated challenges, experts seem to feel that 2014 has ended with the outbreak response headed in a positive direction.

To better understand some of the factors that contributed to the inability to control the outbreak early on, we recommend The New York Times piece “How Ebola Roared Back.”  A new interactive timeline from the World Health Organization also offers a comprehensive view of how the response, initially led by the UN’s health agency, has unfolded since March 2014.

Looking forward to 2015, a Time interview with Ebola expert Professor Peter Piot underscores that beating Ebola will require “a long effort, a sustained effort [for] probably the rest of 2015.” Although Piot recognizes that we will not see the end of the Ebola outbreak with the start of the New Year, we have reason to be optimistic about the coming year. According to the Time article, Piot has been impressed by the progress he has seen in countries like Liberia and Sierra Leone. The close of 2014 will not signify the end of the fight against Ebola, but there is reason to hope that 2015 will see even more progress toward ending the deadly outbreak.

On a final note, we wanted to share Ebola Deeply’s “Sunrise, Sunset: Honoring the Health Workers Who Died from Ebola in 2014.” It is an important reminder of the men and women who have bravely and selflessly sacrificed everything  in their fight against Ebola.