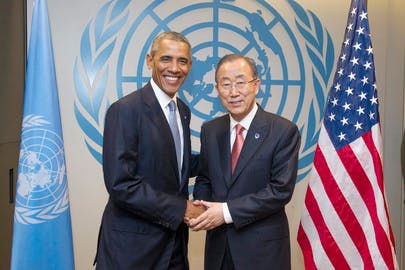 The 69th annual session of the United Nations General Assembly began yesterday morning with a message of urgency and a strong dose of reality. Few leaders—most especially President Obama—could argue with Secretary-General Ban Ki-moon when he said: “It may seem as if the world is falling apart, as crises pile up and disease spreads. But leadership is precisely about finding the seeds of hope and nurturing them into something bigger. That is our duty.”

From the terrorist threat posed by groups like ISIL, to the Ebola epidemic, to the stark realities of climate change, it has certainly been an all-around painful year for diplomats — and more so for the world. And for that very reason, one would be hard pressed to find a year in which the UN system has played a more central role in advancing American interests.

This week, the President and his cabinet are investing considerable time at the UN’s largest annual convening to directly address challenges that are central to our foreign policy priorities. That includes Tuesday’s UN Climate Summit, where the President advanced discussions on climate change and the United States joined countries around the world in taking climate action. It involves a high-level meeting on the response to Ebola where the President will speak on Thursday. And it entails a Friday summit on UN peacekeeping, convened by Vice President Biden, which will “underscore the international community’s commitment to strengthening peacekeeping.”

Yet, undoubtedly most high profile of all, the President’s commitment to navigating foreign policy objectives through the UN was showcased in yesterday’s speech to the General Assembly, and yesterday’s chairing of the Security Council—a move unprecedented by any other U.S. President. Both events had a clear objective: confronting the terrorist threat posed by groups like ISIL.

In this quest, Obama explicitly chose a context of international cooperation. Speaking from two of the world’s most far-reaching podiums, the President showed that the UN is the right forum to line up global commitments in the fight to stamp out extremism. His efforts at the UN achieved an important result: unanimous approval in the Security Council of a resolution demanding countries toughen their laws to prevent the flow of foreign fighters to terror groups. As the President said, “This is the work that we must do as nations. These are the partnerships we must forge as an international community. And these are the standards that we now must meet.”

Indeed, acting as a global community is an approach that remains an essential—and effective—tool in the U.S. foreign policy toolbox, now more than ever. As Obama said to the General Assembly and to the world, “When nations find common ground, not simply based on power, but on principle, then we can make enormous progress. And I stand before you today committed to investing American strength in working with nations to address the problems we face in the 21st century.”

The greater our global challenges, the more this administration has relied on the collective strength and convening power of the United Nations. In a year marked by grave challenges, that commitment sews exactly the “seeds of hope” which the Secretary-General referenced, and which we desperately need to see.