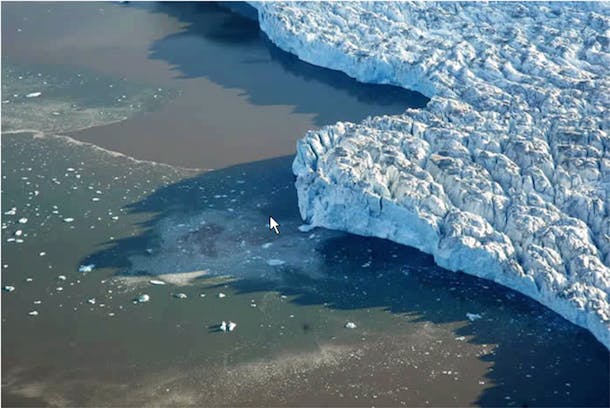 In his State of the Union message on Tuesday night, President Obama emphasized that “no challenge – no challenge – poses a greater threat to future generations than climate change.”

He reiterated the key facts: “2014 was the planet’s warmest year on record. … 14 of the 15 warmest years on record have all fallen in the first 15 years of this century.” And he warned of “rising oceans, longer, hotter heat waves, dangerous droughts and floods, and massive disruptions that can trigger greater migration, conflict, and hunger around the globe.”

The President also took deserved credit for the Administration’s actions to address this challenge, and he warned, “I will not let this Congress endanger the health of our children by turning back the clock on our efforts.”

He then said, “There’s one last pillar to our leadership — and that’s the example of our values.” He was in fact pivoting to another subject, but it was exactly the right place to go in talking about climate change.

Here’s what I wish the President had said at that moment:

“Climate change is not just a scientific issue – it is also an ethical issue, a moral issue. Religious leaders of every denomination have spoken about this, most recently Pope Francis on behalf of the global Catholic Church. But whether we are part of a faith community or not, we can all hear a call to conscience.

“Our use of fossil fuels is having global impacts. It is causing harm today to people whose lives depend on the climate – farmers who see their crops burn up in a searing drought, because the rain no longer comes when it always did; or fishermen for whom the fish no longer come because the water is now too warm, or who see the very oceans change, becoming more acidic and harming shellfish, because of all the carbon dioxide being absorbed from the atmosphere. We don’t harm those people intentionally, but they are harmed just the same. It is our moral duty to take responsibility for our actions.

“It is equally an ethical issue that we are harming future generations, whose opportunities in life will be diminished by the harm we are doing to the Earth’s natural systems. As Americans, as parents and grandparents, and as temporary residents on this fragile place we call Earth, our values call us to protect our natural heritage for those who will come after us – for our children and their children and their children, too.

“We are at the start of a great transformation of the world’s energy systems, and that will yield great benefits for our economy, for our security, and for our health in addition to the environment. Let us move forward now with urgency and enthusiasm for all of those reasons – but most importantly because it is the right thing to do.”