We’re Thankful for These 6 Pieces of News

We’re Thankful for These 6 Pieces of News 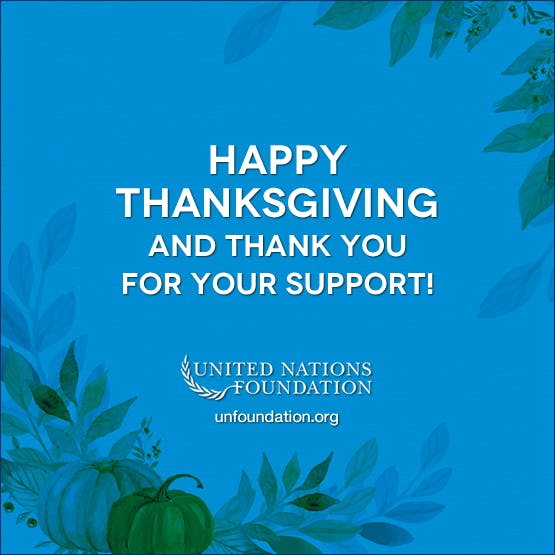 As friends and families in the United States gather to celebrate Thanksgiving, there is a lot for which to give thanks.

While the world currently faces serious conflicts and challenges that rightly demand our attention, it’s important to remember that progress is happening in many areas thanks to the hard work of the United Nations and partners and supporters around the world.

This progress is a reminder that when we come together and act, we can change and save lives. Here are six pieces of recent news that provide hope that we can build a better world.

1. The world has met the Millennium Development Goal targets on malaria.

Last week, the United Nations announced that the world has met the targets in Millennium Development Goal 6 to halt and begin reversing the incidence of malaria by the end of 2015. Efforts to stop malaria have saved more than 6 million lives since 2000. Malaria still takes too many lives, but this is important progress on which to build.

2. More than 17 million lives have been saved thanks to measles vaccination.

This month, the World Health Organization announced that measles vaccination saved 17.1 million lives from 2000 to 2014. We still have more work to do to protect all children from measles – and we need more resources to do it – but this is important progress.

On November 12, UN agencies and the World Bank Group announced that maternal mortality has decreased by 44% since 1990. While the world has made strides, an estimated 303,000 women still died in 2015 because of complications of pregnancy and childbirth and progress has stalled in recent year – a sobering reminder that we must do more.

4. Nigeria has been removed from the list of polio-endemic countries.

At the end of September, the World Health Organization announced that polio is no longer endemic to November, which means it has interrupted transmission of the debilitating diseases. This leaves only Pakistan and Afghanistan on the endemic list. According to WHO, “As recently as 2012, Nigeria accounted for more than half of all polio cases worldwide.” Nigeria has not had a confirmed case of wild polio since July 24, 2014 – an important milestone to a polio-free Africa and the end of polio worldwide.

Ahead of the start of the UN conference on climate change on November 30, the UN Framework Convention on Climate Change released a report analyzing the impact of countries’ national action plans to fight climate change. As of October 1, 146 countries – covering approximately 86% of global greenhouse emissions – submitted plans to take climate action in their countries.

In November, Guatemala’s congress voted to raise the minimum age of marriage to 18 years. While enforcement of the law is a critical next step, this is an important move toward ending child marriage in the country.