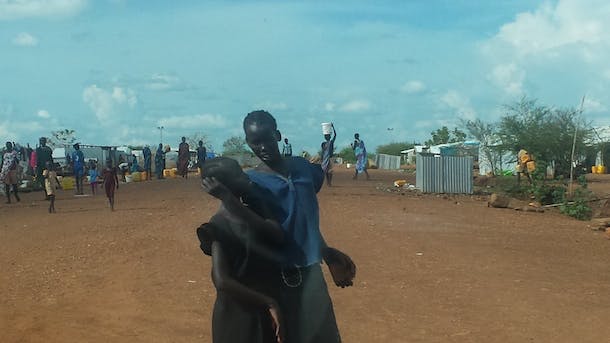 Editor’s Note: Peter Yeo, UN Foundation Vice President for Public Policy and Advocacy, is traveling this week in South Sudan to observe the work of the United Nations in protecting civilians and their health. South Sudan remains at a critical juncture in the implementation of August’s cessation of hostilities agreement.

This week, I had the chance to visit a United Nations camp in Juba, South Sudan housing over 10,000 civilians fleeing conflict.

Months of hostilities in the young country have placed 7 million people in need of humanitarian assistance – half of them children. There, I met Alejandro, a UNICEF worker on the frontlines of immunizing kids. What Alejandro shared is an important reminder of UNICEF’s vital role in saving the lives of kids in South Sudan.

On a Friday a few weeks ago, Alejandro received an urgent report of a measles outbreak in a far corner of the camp. He and his team jumped on it. Measles can spread quickly in a setting where the tents housing the residents are less than a foot apart.

The UNICEF team immediately identified 39 children who had been sickened by measles and treated them in the camp’s makeshift infirmary. By Monday, UNICEF had launched an emergency, camp-wide immunization campaign to keep other kids from being infected by the life-threatening measles.

The outbreak was contained due to the fast work by Alejandro and his team. It’s just one example of their life-saving work. To date, UNICEF and its partners have immunized more than 328,000 children against measles, and the camp in Juba is now measles free.

The UN partners of the UN Foundation’s Shot@Life campaign, once again, came through for kids like yours and mine. There is still a long way to go, but UNICEF can continue its vital work with all of our help.