UN Stands Up for Human Rights at the Olympics

UN Stands Up for Human Rights at the Olympics 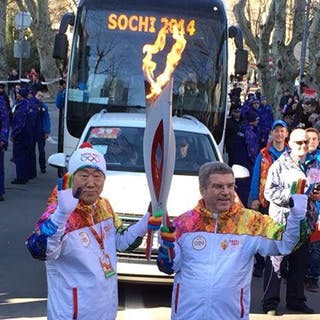 Athletes from 88 countries have gathered in Sochi to compete. As a long-time runner, triathlete, and bike racer, I appreciate the spirit of competitiveness these individuals bring with them.  But the Olympics are about more than competition. They’re about building understanding between people of different cultures and countries – understanding that must be based on respect for human rights.

Today, United Nations Secretary-General Ban Ki-moon addressed the International Olympic Committee in Sochi, becoming the first Secretary-General to do so.  He used his speech to highlight the power of sports to unite people and to call on people everywhere to respect the Olympic Truce, lay down their weapons, and uphold human rights, including LGBT rights.

Here are some of our top quotes from the Secretary-General’s speech, which can be found in its entirety here.

“The athletes here carry the flags of different nations – but they are all joining under the banner of equality, fair play, understanding and mutual respect.”

“The athletes send a unified message that people and nations can put aside their differences. If they can do that in Sochi’s sporting arenas, leaders of fighters should do the same in the world’s combat areas.”

“Many professional athletes, gay and straight, are speaking out against prejudice. We must all raise our voices against attacks on lesbian, gay, bisexual, transgender or intersex people.  We must oppose the arrests, imprisonments and discriminatory restrictions they face.”

“The United Nations stands strongly behind our own ‘Free and Equal’ campaign, and I look forward to working with the IOC, Governments and other partners around the world to build societies of equality and tolerance. Hatred of any kind must have no place in the 21st century.”

“The popularity of sport transcends all barriers. Sport has an amazing power to spontaneously unite people as one in solidarity. … The United Nations is harnessing this enormous force for progress. Our vision to leverage the valuable power of sport for peace and development enjoys the full support of all United Nations Member States.”

The Secretary-General then summed it up perfectly at a press conference, “The Olympics give us an opportunity to celebrate everyone’s right to compete on a level playing field – no matter what they look like, where they come from or whom they love. … Let the flame of the Olympics be a symbol for sport as a global, unifying power for human dignity, peaceful progress, development and rights for all.” The Secretary-General continues to demonstrate strong leadership to further human rights for all people – an example we should all follow.