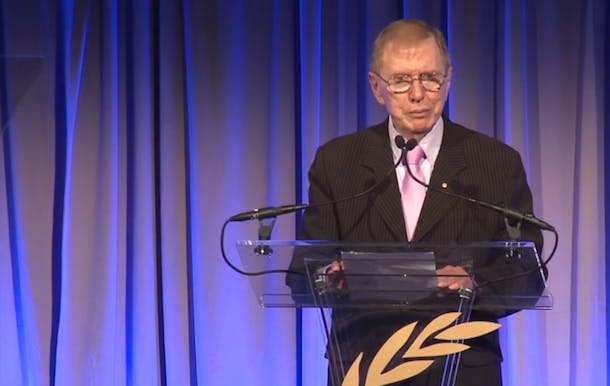 The meeting also follows the comments by Justice Michael Kirby, the former chair of the Commission of Inquiry on North Korea and recipient of the 2014 Leo Nevas Human Rights Award, that “the world cannot now lament, ‘if only we had known…’ Now, the world does know. And the question is whether the world will respond effectively.”

To hear Justice Kirby’s comments on accountability for human rights violations in North Korea at the UN Foundation/UNA-USA Global Leadership Gala in October 2014, click here or watch below.

During the Security Council’s discussion, U.S. Ambassador to the UN Samantha Power called life in North Korea a “living nightmare.” Highlighting the Commission’s findings, UN Assistant Secretary-General for Human Rights Ivan Šimonović concluded, “Rarely has such an extensive charge-sheet of international crimes been brought to this council’s attention.”

Australia’s UN Ambassador also linked the recent Sony Hack, which some U.S. agencies have linked to North Korea, to evidence that North Korea presents a threat to international peace and security. Highlighting the Sony hack, Ambassador Power noted, “It is exactly the kind of behavior we have come to expect from a regime that threatened to take ‘merciless countermeasures’ against the U.S. over a Hollywood comedy, and has no qualms about holding tens of thousands of people in harrowing gulags.”

Earlier in December, a majority of the 193 members of the UN General Assembly adopted a non-binding resolution encouraging the Security Council “to consider the relevant conclusions and recommendations of the commission and take appropriate action to ensure accountability” for human rights violations in North Korea.