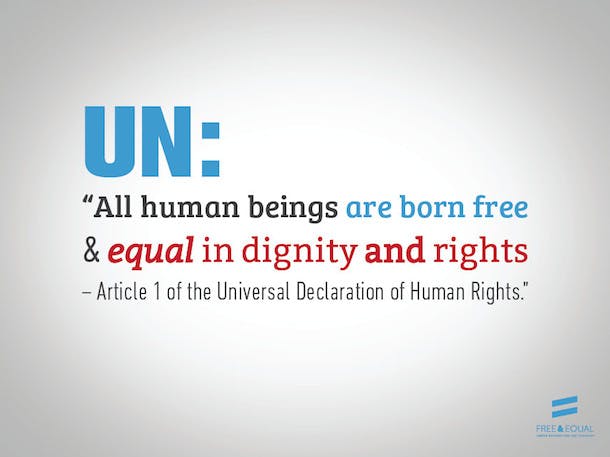 Just in time for Pride month, the United Nations Human Rights Office yesterday released a much-anticipated report on discrimination and violence against individuals based on sexual orientation and gender identity.

Mandated by UN Human Rights Council, the UN’s top human rights organ, the report notes significant global advancement in protecting the human rights of lesbian, gay, bisexual, transgender, and intersex (LGBTI) persons since the UN’s first groundbreaking report on LGBTI violence and discrimination in 2011. Developed with inputs from across the UN human rights system, UN member states, and grassroots advocates, the report provides an update on the international LGBTI human rights landscape as well as lays out best practices “to overcome [LGBTI] violence and discrimination.”

Positive developments in global LGBTI rights range from strengthening anti-discrimination laws to repealing criminal penalties for consensual same-sex relationships to expanded legal recognition for same-sex relationships. Among other examples of progress in the report, new “specialized hate crime prosecution units” in Brazil, Honduras, Mexico, and Spain, as well as a new national task force on LGBT-violence in South Africa are spotlighted.

On the other hand, the report notes much of this momentum is “overshadowed by continuing, serious, and widespread human rights violations perpetrated too often with impunity, against individuals based on their sexual orientation and gender identity.” It also highlights that “hate-motivated killings of LGBT individuals have been documented in all regions.”

Finally, the report recommends that the UN Human Rights Council be “regularly informed” of patterns related to LGBTI violence and discrimination. This echoes the call of many human rights experts who have called on the Council to establish a new regularized reporting mandate on LGBTI human rights issues. UN Secretary General Ban Ki-moon has also declared, “We need to document [homophobic violence and discrimination] and share information with States on a regular basis for discussion and action”

The report marks the latest in UN leadership to advance LGBTI human rights, including the recent release of the UN Free and Campaign’s viral Faces video, marking the International Day Against Homophobia and Transphobia.