The Road to Ratification of the UN Charter

The Road to Ratification of the UN Charter 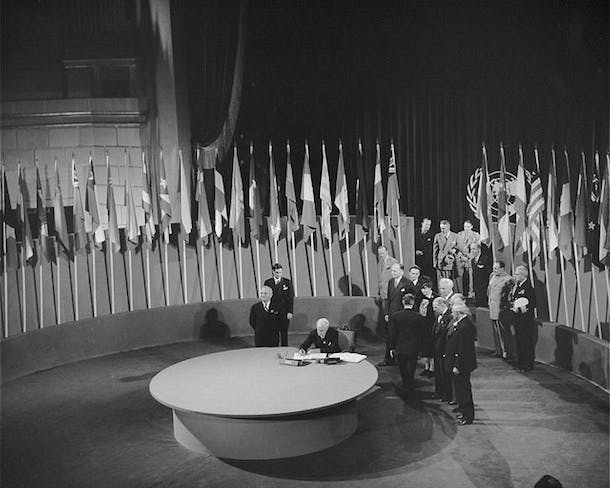 Editor’s Note: This is the first in a series of blog posts on the founding of the United Nations 70 years ago.

The celebratory speeches were over. Everyone from the 50 delegations had returned home from San Francisco. The papers reported on the ongoing war against Japan and the devastating conditions in war-torn Europe. But the hard work of creating the United Nations was not over. It had barely begun.

After the 50 delegations at the San Francisco conference had signed the UN Charter on June 26, 1945, governments still needed to ratify the document. This was no foregone conclusion.

After World War I, the United States Senate had famously failed to ratify the final draft of the Versailles Treaty that included an obligation to join the League of Nations. President Woodrow Wilson had spearheaded the efforts to create an international organization, and he even received the Nobel Peace Prize in October 1919 for his role in promoting the organization.

But Republicans in the Senate objected to Article X that obliged League members to provide assistance to fellow members under threat from external aggression. Article X would also have allowed the League of Nations to declare war without approval by Congress.

While the majority of Senators were willing to vote for the Versailles Treaty, Wilson never managed to secure the two-thirds coalition of senators that every president requires to ratify a treaty. Wilson suffered a grievous stroke in 1919, and his successor, Warren G. Harding, opposed the Versailles Treaty. The dream of the U.S. joining the League of Nations was dead. The U.S. signed separate peace treaties with Germany, Austria, and Hungary in 1921.

Many saw American absence from the League of Nations as one of its key failures. This time, after World War II, had to be different. It was critical that everyone ratify the Charter.

Presidents Roosevelt and then Truman knew that they had to take a different approach to Wilson. The Senate, and particularly the isolationists in the Senate, had to agree to the general principle of an international organization long before the details were worked out.

In 1943, the Senate had already debated the Connally Resolution. Proposed by Thomas Connally, Texas Senator and chair of the Senate Committee on Foreign Relations, the resolution proposed that the U.S. should become a member of a postwar “international authority” of “free and sovereign nations.” After rigorous discussion, the Senate finally approved a resolution that agreed that the U.S.  should join a world authority “to prevent aggression and to preserve the peace of the world.” The Connally Resolution passed with an overwhelming majority of 85-5.

But U.S. membership was, once again, made subject to approval of the treaty by the Senate. The Senate still had the final say after San Francisco.

President Truman, Thomas Connally, and others would have to ensure Senate support. There was no time to waste.

In the week after June 26, U.S. delegates from San Francisco presented their reports on the conference to the Senate and President Truman delivered the Charter to the Senate. Democrat Thomas Connally argued to the Senate on June 28 that the League of Nations “seemed doomed to failure from its inception” without the United States. The UN would never succeed without U.S. participation.

Former isolationist turned U.S. delegate to San Francisco, Republican Senator Arthur Vandenberg, declared the next day that he now understood how Benjamin Franklin had felt when he signed the American Constitution in 1787. Like Franklin, Vandenberg knew that the document he had created was not perfect. It was the result of complicated compromises between nations with very different points of view, just like the American Constitution had emerged from a panoply of local interests.

Like Franklin, Vandenberg focused on the miracle of agreement between 50 nations. “It was no wonder we had many a troublesome day and many a critical night. It is no wonder that none of us can say that he wholly approves the net result. The wonder is that we can all approve so much.”

After Vandenberg’s speech on a Friday, President Truman appeared before the Senate the next Monday to deliver the Charter of the United Nations to the Senate’s presiding officer. The Charter, Truman emphasized, was a living document. It could be changed and adapted to new circumstances, just like the U.S. Constitution. The UN Charter, Truman implied, would become as foundational for the world as the U.S. Constitution was for America.

It was now up to the Senate Foreign Relations Committee and then the Senate itself to vote on the Charter. Truman had to travel to Potsdam, Germany for a conference with Great Britain and the Soviet Union about ending the war. He would also soon have to decide how to use the atomic bomb after the first successful nuclear test in New Mexico on July 16.

In the interim, Nicaragua seized the initiative, becoming the first country to announce its decision to ratify the Charter on July 6.

Would the U.S. be the second country to ratify the Charter? How did the pros and cons play out in ratification debates? Who would follow next?

“History is writing with a rushing pen and we must accommodate its pace,” proclaimed Vandenberg in his speech to the Senate. Find out how that history was written by following the founding of the UN on Twitter through @UN_History.