The Constitutional Conventions of the Charter

The Constitutional Conventions of the Charter 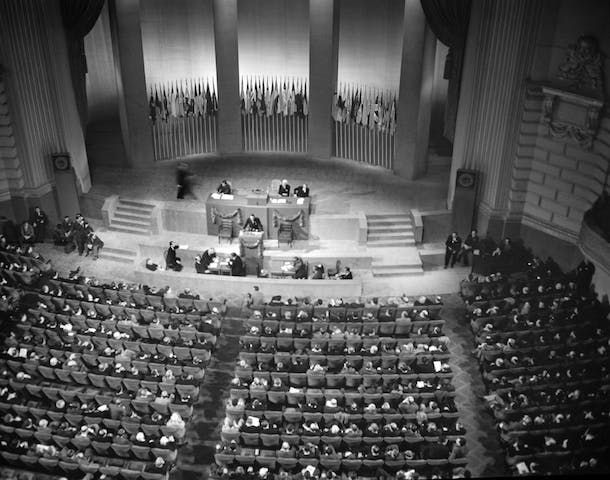 On October 16, 1945, international delegates signed a United Nations agency into existence at what is today the most photographed hotel in world — Château Frontenac in Quebec City. Under the chairmanship of future Canadian Prime Minister, Lester Pearson, the delegates created the Food and Agriculture Organization.

Canadians had been intimately involved in conferences to coordinate the Allies during World War II. These conferences had laid much of the groundwork for UN cooperation. Frontenac, for instance, had also hosted the Quebec Conference of 1943 where Winston Churchill, Franklin Roosevelt, and the Canadian Prime Minster William Lyon Mackenzie King conferred about strategies for the war.

Like other medium-sized nations such as Australia, however, Canada had some misgivings about the Charter. Like Australia, Canada suggested a solution at the San Francisco conference. As I explored in last week’s blog post, Australia proposed removing the veto for the five permanent members of the Security Council, but this did not come to pass.

Simultaneously, Canada took another tack. Canada was less concerned about the veto power, because Canadian delegates believed that the Big Five might change their opinions about the veto over time.

But its delegates wanted to pass an amendment that would make the UN Charter a document more akin to the U.S. Constitution. They wanted a Charter that enshrined regular opportunities for revision.

Together with Brazil, Canada tabled an amendment on June 14 that proposed a world conference in five to ten years’ time to revise the charter. The conference would be a constitutional assembly. It would consider amendments to the Charter and would take into account changing global circumstances.

The proposition received support from other medium-sized nations. The Foreign Minister of Columbia, Alberto Lleras Camargo, was willing to allow the Big Five veto power on amendments to the UN Charter, but he believed that many countries would be much more supportive of the Charter if the Brazilian-Canadian proposal for a regular “constitutional convention” passed.

In a vote on June 15, the proposal received support from a majority of nations. Small and medium-sized nations favored the idea. Twenty-three delegations voted for the plan, but 17 voted against. Because this type of suggestion required a two-thirds majority, the initiative failed.

Instead, as it currently stands, Article 109 of the UN Charter allows for a general conference to review the charter “at any date and place to be fixed by a two-thirds vote of the members of the General Assembly and by a vote of any nine members of the Security Council.”

The failure of the proposal did not discourage Canadians from participating in the UN or from hosting the FAO conference. Lester Pearson was a driving force in using the UN to create consensus about solutions to international problems. In 1952, he would serve as president of the UN General Assembly. But his greatest international achievement was suggesting the plan to preserve peace during the Suez Crisis in 1956. Pearson turned to the UN and proposed a UN peacekeeping force. The subsequent success of the plan earned him the Nobel Peace Prize in 1957.

For one Canadian journalist reporting on the FAO conference at Château Frontenac in October 1945, the “most hopeful portent” of the meeting was the talking points. The delegates were “not really talking about statistics, surveys and policies.” They were talking “about people — people drawn and lifeless with hunger and sometimes dying of it.” (Ralph Allen, Globe and Mail). In the end, dealing with people and problems proved more pressing than constitutional conventions.