The American Ratification of the UN Charter

The American Ratification of the UN Charter 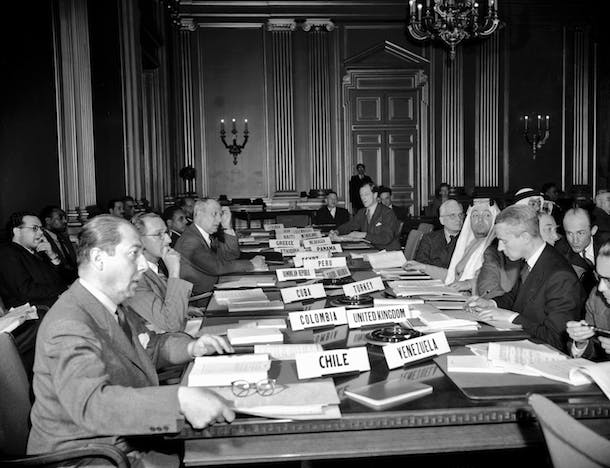 Editor’s Note: This post is the second in a series of blog posts on the founding of the United Nations 70 years ago. You can read the first post here.

When the U.S. Senate Foreign Relations Committee approved the UN Charter, the one opponent was reclining in a chair in the Senate barbershop with a hot towel draped around his face. California’s Hiram Johnson had been an isolationist since the end of World War I and had opposed U.S. membership of the League of Nations too. According to Life magazine’s report, a clerk ran to the barbershop to ask Johnson for his vote on the UN. Unwrapping the steaming towel, Johnson said “No.” The clerk reported Johnson’s dissent. But the isolationist was alone.

All other members of the committee voted “Yes.” The Senate followed on July 28, approving the Charter 89-2.

The debate about the UN Charter had continued during the five days of Senate hearings in late July. Sixty-one Americans testified for and against the UN Charter. The witnesses ranged from the sole member of the United Nations of the Earth Association to Dr. Helen Dwight Reid, consultant to the U.S. delegation at San Francisco and president of the American Association of University Women. While several witnesses suggested improvements to the Charter, the outright skeptics were few. Mrs. Cecil Norton Brey denounced the Charter, but she represented American United Inc., a group with a membership totaling a mere 23 people. Others, like Helen Reid and Ulric Bell of Americans United for World Organization, pushed for ratification.

Just over a week later, on August 8, President Truman signed the UN Charter. It was an eventful day, yet the signing did not receive as much publicity as the two other events that day. The first one was the establishment of an International Military Tribunal for War Crimes in Europe. The second was the Soviet declaration of war on Japan. Looking in the background was also the aftermath of the first ever atomic bomb, dropped on Hiroshima two days earlier.

But amidst all the news, the U.S. had shown that it would take a decisively different path than the one taken after World War I. It was up to other nations to follow suit and ratify the Charter.