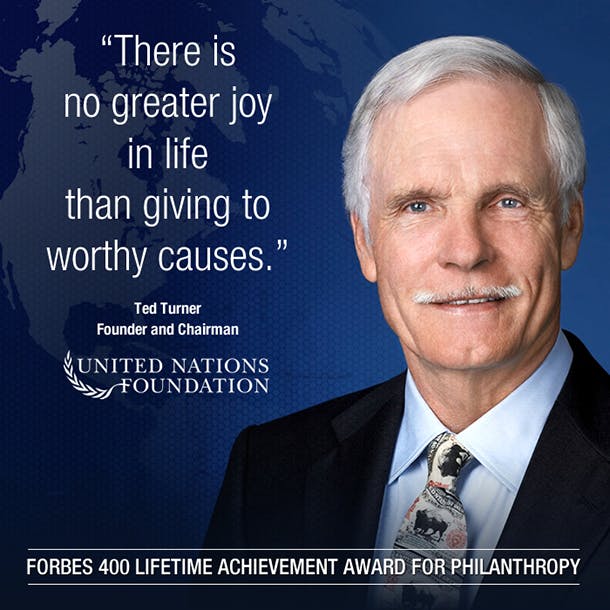 Bold. Unconventional. Generous. This is how Bill Gates has described Ted Turner, the United Nations Foundation’s Founder and Chairman, who was honored yesterday with the Forbes 400 Lifetime Achievement Award for Philanthropy.

This award could not be more deserved.

Ted is a big thinker and has long understood that in our increasingly connected world, filled with “problems without passports,” we need planetary philanthropy.

Ted’s commitment to global problem-solving led him to create the UN Foundation in 1998 with a $1 billion investment to support UN causes. As a passionate advocate of the UN and its unique role in advancing global solutions, Ted believes that we can each help achieve international peace and progress by supporting the UN’s work. His gift helped inspire thousands of people, companies, and foundations to join us and double the impact of his gift.

“Tycoons used to compete for their place on the Forbes and Fortune lists of wealthiest people. If they did give back, it was often late in life and involved museums or the arts. They spent far more philanthropic dollars on oil paintings of women than on improving the lives of real women. Turner’s gift helped change that culture, reviving the tradition of great philanthropists like Rockefeller and Carnegie

“The gift brought new respect to the United Nations and made it increasingly fashionable for billionaires to worry about global poverty. These tycoons bring not just their checkbooks to the table but also a business sensibility that introduces greater rigor and evaluation to the world of bleeding hearts. All this has helped shine a greater spotlight on neglected issues – which, in turn, has led to extraordinary results.”

Ted’s philanthropy is not limited to the UN space alone. Recognizing the grave threat of nuclear weapons and the proliferation of weapons of mass destruction, Ted collaborated with Senator Sam Nunn to create the Nuclear Threat Initiative, which works to prevent attacks from and the spread of biological, chemical, and radiological weapons.

Perhaps some of Ted’s most creative endeavors stem from a personal passion of his: protecting the environment. From raising awareness of the value of biodiversity through the Turner Endangered Species Fund, to conserving the lands he owns as the second largest individual landholder in North America, Ted is a longstanding steward of our shared environment. Through the Turner Foundation, Ted continues his work to safeguard the environment and mitigate climate change. He has even earned the affectionate nickname “Captain Planet” for his support of the Captain Planet Foundation, which builds off the successful “Captain Planet and the Planeteers” animated series that Ted helped create to inspire children to care about the environment.

Through Ted’s leadership and championing of planetary philanthropy, the world is a more peaceful, safer, and healthier place to live.

He has set a powerful example with important lessons for all of us:

– That anyone can make a difference;

– That we all are part of one community; and

– That the greatest success is not about how much we give, but how many lives we change.

We hope you will continue to join with us and follow Ted’s example of supporting the UN for a better world.