*Note from the Editor: this post was last updated October 5

The powerful earthquake and tsunami that struck the Indonesian island of Sulawesi has left over 190,000 in urgent need of humanitarian aid.

According to the UN Office for the Coordination of Humanitarian Affairs (UNOCHA), the 7.4 magnitude earthquake and subsequent tsunami have displaced more than 70,000 people and damaged an estimated 66,000 homes.

The coastal city of Palu, which took a direct hit from the 14-foot tsunami, suffered extensive damage to important infrastructure, including roads, houses, shops, mosques, and hotels. As of October 5, the death toll in Central Sulawesi has risen to more than 1,600 and around 2,500 people have been seriously injured.

Funds from CERF will support government-led efforts on the ground, helping to swiftly provide shelter, clean water and sanitation, health care, protection services, and more. OCHA states that access to safe water is of chief concern, “as most of water supply infrastructure has been damaged.”

“With so many people having lost all their possessions and with many basic services down, there is also an urgent and immediate need for food, clean water, shelter, medical care and psychosocial support.” – UN Resident Coordinator in Indonesia, Ms. Anita Nirody.

Here’s How You Can Help 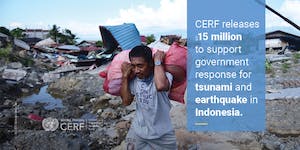 Several UN agencies are mobilizing to support disaster victims (as of October 5):