The 2014 Social Good Summit kicked off today, and it’s been a powerful conversation about how citizens can use technology and new media to create change in their local communities and in the global community.

The conversation has been held in more than 140 countries and more than 30 languages. From Afghanistan to Tunisia to Gaza to the United States, people around the world have raised their voices about what kind of future they want and their ideas on how we can get there.

Topics included: how technology can empower women; the future of education; the need to address climate change; what we need to save mothers’ lives and fight disease; the opportunity in 2015 to create a bold global agenda to end poverty; and refugees, conflict, and reconciliation.

Here are 10 quotes that inspired us during Day One of the Summit (Tune in tomorrow for a great lineup of speakers that are sure to inspire us too!):

1.    “It’s not about me; it’s about we.” – Singer, songwriter, and humanitarian Alicia Keys during remarks about her “We Are Here” movement

2.    “The rising tide has to lift everybody.” – UN Development Programme Administrator Helen Clark on the future of development

4.    “If you take the hard numbers, then science is clearly telling us that we’re running out of time.” – UN Environment Programme Executive Director Achim Steiner on climate change

5.    “I hope that by 2030 we can talk about gender inequality in historical terms.” – UN Women Executive Director Phumzile Mlambo-Ngcuka 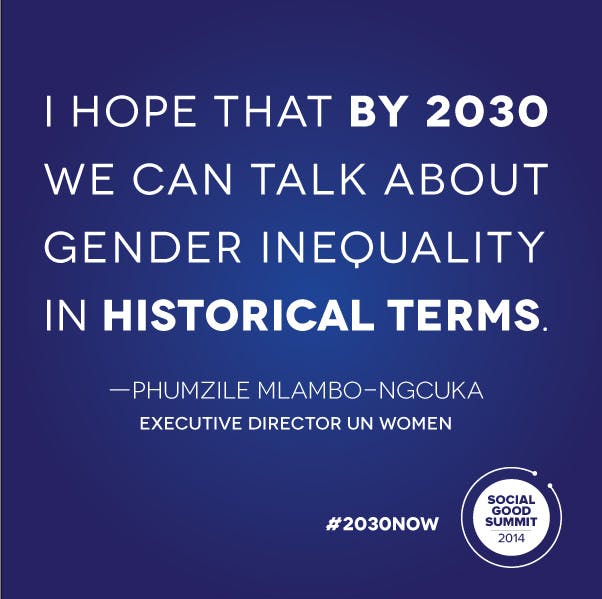 8.    “Behind each of the 51 million people displaced is a human story.” – UN High Commissioner for Refugees António Guterres

9.    “Even leaders want to be led.” – Atom Factory Founder and CEO Troy Carter