Quick! With less than a month to go until the World Cup kickoff, can you name this soccer star based on this childhood photo?

OK, OK…this was a trick question (if you guessed Erin Hohlfelder, then you’re probably my parents).

I may not have been quite good enough back in the day to make it to the World Cup. But I was able to grow up into a healthy kid who could play soccer and have a lot of fun.

That’s thanks not just to the shin guards and orange slices, but also to something more basic that my family probably took for granted: childhood vaccines to combat some of the most preventable diseases around.

Millions of kids around the world still don’t have the same chances that I did. In fact, 6.6 million kids died before their 5th birthdays last year – many from diseases like diarrhea and pneumonia, which kill more kids than AIDS, TB, and malaria combined.

Vaccines are some of the lowest-cost, highest-impact ways to help prevent these deaths. But nearly 1 in 5 children around the world still don’t have access to these vaccines – which means they don’t have the chance to grow up to be the next Didier Drogba, Per Mertesacker, or Abby Wambach.

So, as billions of people start tuning in on June 12 to cheer for their favorite teams in the World Cup, we at ONE will be busy cheering for a public-private partnership that is saving millions of children’s lives: the GAVI Alliance.

Like the World Cup – with teams from six continents coming together to compete on a level playing field – GAVI is also a story about the world coming together: different donors, countries, activists, technical partners, and private companies joining forces to help deliver vaccines. And all these players need to work as a team if GAVI is to build on its successes and get the next big goal it wants.

Today at a meeting in Brussels, GAVI announced a new global effort to raise $7.5 billion from donors over the next five years to save more than 5 million additional lives. At that same meeting, we launched a 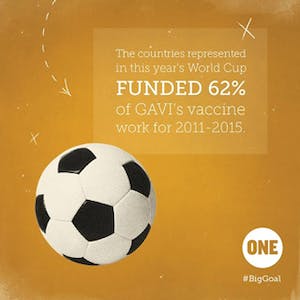 World Cup-themed report, designed to draw parallels between the shots, saves, and goals made on the field and the shots (vaccines) needed to save lives and help achieve GAVI’s big goals.

Our new report, “Going for Goal: Immunisation and the Case for GAVI,” looks at each team playing in this summer’s World Cup (as well as a few others who didn’t make the cut), analyzing their countries’ contributions to global immunization efforts and offering up “pundit’s verdicts” for their future performance. It also spotlights GAVI’s “corporate sponsors,” and offers five key recommendations for the next five years that will help make GAVI’s game plan a success:

1. Donors must step up their support for GAVI. A number of countries each need to significantly increase their financial contributions in order for GAVI to reach its goals;

2. Countries with high levels of disease burden must increase domestic financing for health and must strengthen their immunization systems.

3. Emerging economies must close the equity gaps between those populations in their countries who receive vaccinations and those who don’t.

4. GAVI should strengthen its own strategies to ensure that more children are reached, regardless of where they live.

5. All countries must work harder to combat vaccine-preventable outbreaks, which are not only deadly but also threaten to reverse years of investments and progress.

Ensuring that we get vaccines out to hundreds of millions of children is no easy task. It will require perseverance, coordination, skills, and teamwork—just like it takes to win a World Cup soccer match.

But if we can work together to ensure GAVI achieves its next big goal, saving more than five million children’s lives will be more beautiful and rewarding than any trophy imaginable.

Help us get the ball rolling (pun intended!) by downloading the report, sharing one of our soccer-themed share graphics, signing our GAVI petition to world leaders, and tweeting about vaccines using #BigGoal throughout the World Cup.