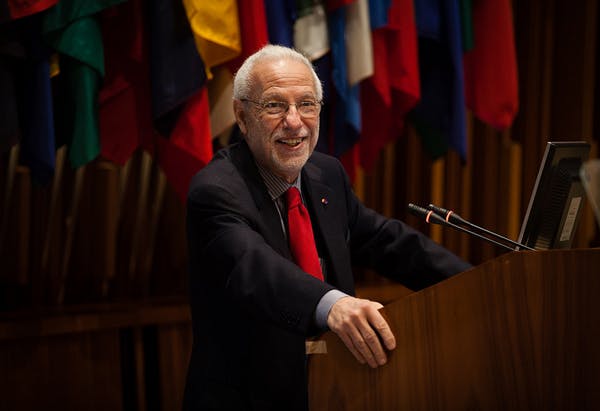 Last week, the immunization community lost a great champion and hero when Dr. Ciro de Quadros passed away. A Brazilian epidemiologist, Dr. de Quadros was instrumental in eradicating smallpox and ridding the Americas of polio, measles and rubella. Andrea Gay, Executive Director of Children’s Health for the UN Foundation, knew and worked with de Quadros. She offers her reflections on his work and legacy here:

Chelsea Hedquist: When did you first meet Dr. de Quadros?

Andrea Gay: I first met Ciro in 1998 when the UN Foundation decided, at the request of Dr. Gro Brundtland who had just become Director-General of WHO, to support the polio eradication effort. At this time, the polio effort was in dire need of revitalization, and Ciro’s successful experience in the Americas was enormously helpful to understanding how the Foundation could have an impact. He was an incredibly active presence at our polio meetings with WHO and UNICEF, always imparting knowledge, wisdom, and advice. To many of us, Ciro was a figure of almost legendary proportions. I had first heard of him nearly 20 years earlier when I was working with another doctor in the U.S. Public Health Service. This doctor was also involved in smallpox eradication in Africa, and he had many stories to tell about that effort and the people involved. Of course, the most colorful and memorable were always about Ciro.

CH: How did the two of you work together over the years?

AG: From our first meeting in 1998 up until this year, Ciro was a constant presence at all UN meetings on polio eradication and similarly at most of the Measles and Rubella Initiative meetings, in which I participate. I was also fortunate to cross paths with Ciro at many events here in Washington involving PAHO, the Sabin Vaccine Institute, and the Brazilian Embassy.  Most recently, we worked together with the International Pediatric Association to encourage the active participation of pediatricians to eliminate measles and rubella in their home countries.

AG: I always loved seeing Ciro and his wife casually enjoying brunch on Sundays in a favorite café in Adams Morgan (Washington, D.C.), surrounded by newspapers and chatting with friends as they came and went. Despite being a widely respected figure, he was incredibly accessible.

I last saw Ciro speaking and being honored at the Sabin Vaccine Institute’s 20th Anniversary celebration. He was clearly delighted to have so many friends and colleagues there for the occasion, and everyone was equally pleased to have a chance to honor his work and accomplishments. Even with a huge crowd of old and new colleagues, I remember that Ciro took me aside to share a few private words about our mutual friend. That is the kind of person he was – always willing to give people his time and attention, always willing to listen and have a good discussion, always considerate. These were the qualities that made him not only greatly respected but also very much loved by the community. He did tremendous work in the field, but he also shared his knowledge freely and liberally with those of us trying to follow in his footsteps.

CH: What do you consider to be Dr. de Quadros’ greatest contribution to the field of immunization and global health, more broadly?

AG: Many people were involved in the amazing successes achieved under Ciro’s leadership. But certainly that skillful leadership, his encouragement, his creative persistence in the field, and his strong belief about what is possible played an incalculable role in advancing the success of smallpox eradication, followed by the elimination of polio, measles, and rubella in the Americas. These achievements encouraged many of us working in public health to identify and undertake additional global efforts to prevent diseases and attempt to wipe them out where technically possible. Ciro never gave up and our best gift to his memory would be to finish what he helped to start with the global eradication of polio, measles, and rubella.