Progress in Haiti: A period of rebuilding, training and transition

Progress in Haiti: A period of rebuilding, training and transition

Flying at 39,000 feet on my return home from Haiti, I finally had a few moments to think about what I saw and heard over the past few days in the country. 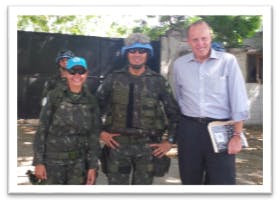 Certainly I was struck by what has changed on the surface in the three years since my last visit to Haiti: the near-absence of 2010 earthquake rubble from the streets and the movement of hundreds of thousands of Haitians from temporary shelter to more permanent homes.

And as we think ahead to Haiti’s future, everything depends on maintaining peace and security, and creating an environment to attract investors and jobs for the country’s incredibly young workforce. I keep returning to the largely unheralded role played by United Nations peacekeepers in Haiti – both soldiers and police officers – in creating this future, and how this role will change in the years ahead.

Still, though much progress has been made, UN peacekeepers and the entire UN team in Haiti have their work cut out for them, even as we see a significantly reduced UN footprint in the years ahead.

UN peacekeepers, largely drawn from Latin American militaries such as Brazil and Paraguay, will be returning to their homes over the next couple of years.

And many of the Haitian people with whom we met are ready for them to go. That’s expected – Haitians are particularly proud of being the first Latin American country independent from colonial powers.

It’s not that the UN peacekeepers haven’t done an exceptional job – a job welcomed by both the Haitian Government and the Haitian people – they have. And their work will continue to be essential to supporting Haiti as it faces the many challenges that remain.

One challenge in particular stands out – national elections. In the coming months, the Haitian National Police and UN peacekeepers will need to work together to provide security once Haiti’s long-delayed national elections are scheduled (this can’t come soon enough). The UN stands waiting in the wings to provide logistical support and assist in the electoral process once the Haitian government green lights the election.

Even more challenging is the justice system. I visited Haiti’s only women’s prison where 245 inmates have yet to go to trial. This prolonged detainment of alleged perpetrators is a crisis that the Haitian government still needs to address. The UN provides support to legal aid offices to help with due process but some perpetrators have been imprisoned without a trial for longer than the required sentence for the accused crime. The UN, the U.S. and other donors are working diligently with Haitians to fix their judicial system.

As the UN peacekeeping force draws down in the coming years in accordance with UN Security Council mandates – the police officers among UN peacekeepers will be the last to go – they can leave knowing they made a substantial contribution to Haiti’s future.

As an expression of our gratitude to UN peacekeepers for the important role they continue to play in Haiti, it was my pleasure to present hand-written thank you cards from our nationwide Thank A Peacekeeper campaign to Sandra Honoré, the Secretary-General’s Special Representative in Haiti. It was my way of saying thanks for all the work the UN has done to empower Haitians to lift themselves from the rubble and move their nation toward a more positive future.