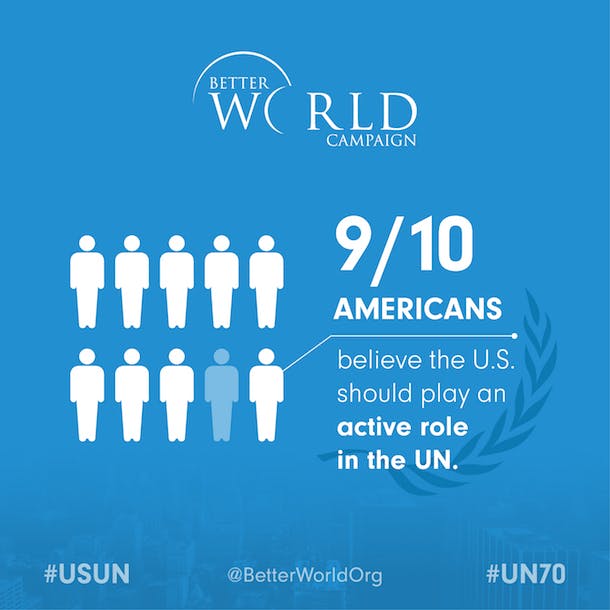 As Americans begin to consider the candidates for 2016, they have already made a clear decision about how the right leader will approach the world.

A new poll conducted by a bipartisan research team and released today by the Better World Campaign finds that registered voters favor a foreign policy approach that embraces a partnership model. More than 8 in 10 – 82% – of Americans agree that to achieve our foreign policy goals, it is better for the United States to “work with major allies and through international organizations.” By contrast, only 15% said the U.S. should “act mainly on our own.

Indeed, Americans will not agree on all policy approaches, yet there remains a strong consensus that diplomacy works, and the United Nations is key to achieving our foreign policy goals.

The poll also shows that a strong majority of Americans, 63%, maintain a favorable impression of the UN. The UN’s favorability is higher than NATO at 57%, U.S. President Barack Obama at 49%, the World Bank at 24%, and the U.S. Congress at 23%.

In fact, 89% of Americans said it is “important for the United States to maintain an active role within the United Nations,” and a strong majority of Americans, 67%, continue to support the United States paying our dues to the UN on time and in full. When asked specifically about our UN peacekeeping dues, support is at 73%.

The nationwide poll of 800 likely voters (520 landline/280 cell) was conducted October 11-14 by the bipartisan research team of Public Opinion Strategies and Hart Research Associates with a margin of error of ± 3.46%.

Other notable findings show that voters are supportive of the UN’s new global goals for sustainable development. Respondents were told that, working through the UN, American and world leaders have established a set of 17 global goals to end extreme poverty, protect the planet, and ensure prosperity for all as part of a new sustainable development plan. These goals set specific targets for all countries to achieve over the next 15 years by the year 2030, regardless of their current level of development. Twenty-two percent of respondents reported awareness of the global goals, while favorable impressions scored 69%, and 83% agreed the United States should participate in a worldwide effort to accomplish the global goals by 2030.

The executive summary is available on BetterWorldCampaign.org, along with the full results.