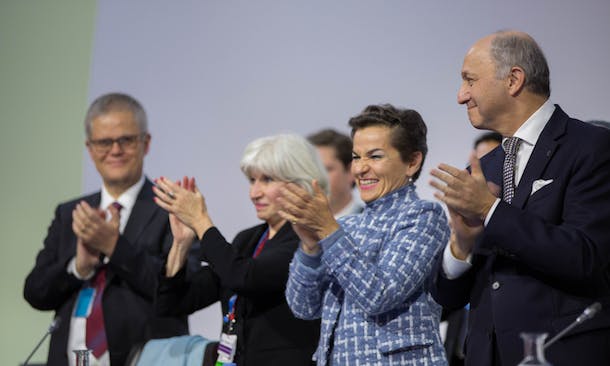 “This conference will be remembered as a turning point in the fight against climate change and in our efforts to create a more peaceful, prosperous planet for all people. The new agreement creates a strong framework to launch an era of unprecedented climate action. Now we must move with great urgency to deliver on that promise. We know this agreement alone will not meet the threat of climate change; that will require continued ambitious action from governments, the private sector, and all of us to limit the global rise in temperature and move more rapidly toward a clean energy future with net zero emissions.

“After decades of debate, the battle over the reality of climate change is over. Countries from every region of the world and every stage of development have committed to act because they recognize that it is in their self-interest and in humanity’s common interest. The commitment to act by countries including Brazil, China, India, and the United States is a clear sign that countries are no longer focused on whether they should act, but how.

“Importantly, the conference in Paris went beyond national governments to welcome the engagement of civil society, the private sector, financial institutions, cities and states. More and more business leaders and investors recognize not just the obligation to act, but also the economic opportunities in the growing clean energy economy.

“The Paris conference made a number of significant advances, most importantly by agreeing to convene again on a regular basis every five years to bring forward increasingly ambitious steps to reduce greenhouse gas pollution, and by strengthening the world’s long-term goals for keeping down the rise in global average temperatures.

“Combined with the adoption of the Sustainable Development Goals, this has been a historic year for people and the planet. Our collective task is immense, but so is the opportunity to usher in a new era of sustainable development. The United Nations Foundation will continue to work with the United Nations and partners around the world to help achieve this future.”