A new UNESCO report, “World Trends in Freedom of Expression and Media Development,” examines press freedom throughout the world. The report was launched at an event hosted by the United Nations Foundation and Freedom House at the U.S. House of Representatives, symbolizing the U.S. commitment to press freedom.

While UNESCO has long espoused freedom of expression as an international norm and press freedom as a vital element in building open, transparent, and inclusive societies, the UN’s education, science, and culture agency has expanded its work in promoting freedom of expression and the protection of journalists over the last three decades. In fact, it is the only UN agency with this mandate. 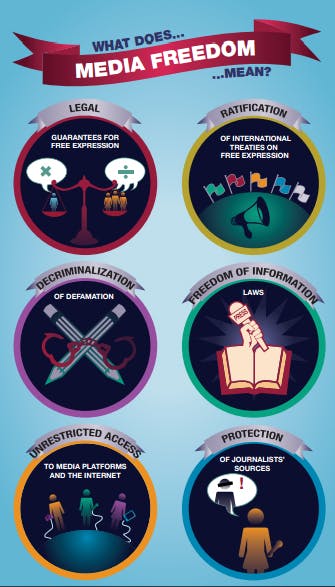 As the report shows, we are in a period of unprecedented change for new media and citizen journalism. Yet more information does not necessarily ensure more freedom of expression. Indeed, this report illustrates that governments in developed and developing countries are reining in free expression.

This global assessment offered an opportunity for an expert panel – moderated by Eugene Robinson of the Washington Post, a Pulitzer Prize winning journalist – to highlight their concerns with key trends:

UNESCO’s commitment to tracking and reporting on these trends is not only critical to expanding press freedom, but also provides insights on what is going on within various world regions. Several panelists stressed freedom of expression is essential to the creation of democratic societies and strong governance.

The panelists also shared their observations from UNESCO meetings and noted the ramifications of the U.S. decision three years to cut off all funding to the organization. They said that over the past few years the U.S. has often made brilliant interventions in support of freedom of expression, protecting natural heritage and access to education. Despite powerful rhetoric, however, the U.S. was ignored and chastised for its nonpayment of dues, severely eroding U.S. influence.

As the UN negotiates a new development framework to replace the Millennium Development Goals, it is essential to embed freedom of expression within a “good governance” goal.  Yet, this concept has been deleted from the recent “Zero Draft.”  Much work remains to secure the promise of a world where free expression is the norm and journalism valued as a true social asset.