On December 11, TIME magazine announced a group of journalists — Jamal Khashoggi of the Washington Post, the surviving staff of Maryland’s Capital Gazette newspaper, the Filipino journalist Maria Ressa, and Reuters reporters Wa Lone and Kyaw Soe Oo – as its 2018 “Person of the Year” for “taking great risks in pursuit of greater truths, for the imperfect but essential quest for facts.”

The United Nations Foundation is honored that one of these journalists has worked with the Foundation as an advisor for our +SocialGood community, a global network of innovators, entrepreneurs, and activists who are dedicated to using technology for global progress. 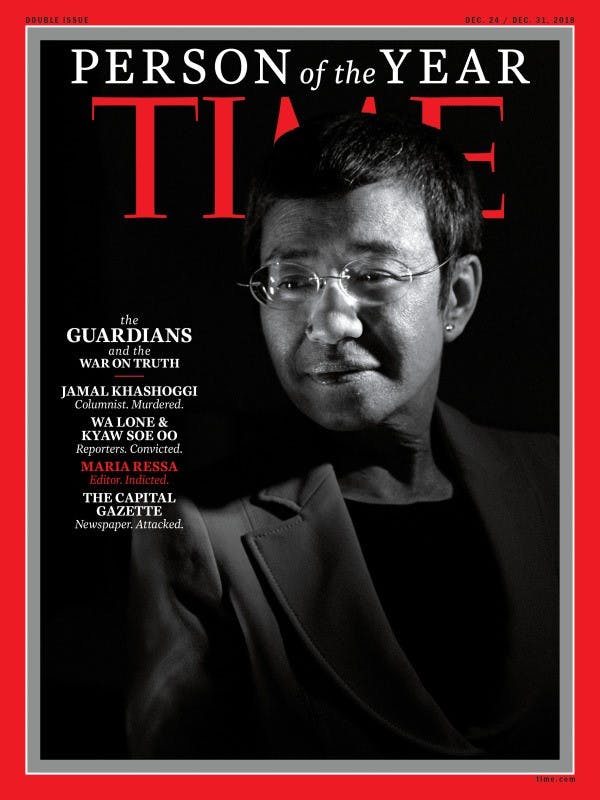 Maria Ressa, a Filipino journalist who founded the online news site Rappler, has helped uncover the country’s violent campaign against drug trafficking and the numerous human rights violations of the country’s president, Rodrigo Duterte. As a result, she and her news site have been targeted and threatened by his government.

In addition to press coverage about Duterte, Maria Ressa and Rappler have shined a light on global issues like peace, safety, and health in the Philippines and around the world. For the past seven years, the news site has hosted a Social Good Summit meetup to explore how technology and innovation can support the Sustainable Development Goals.

This fall, Rappler partnered with the UN Development Programme to host the #HackSociety Ideathon, which explores creative technology solutions that make society more inclusive and humane. Maria has also participated in numerous UN Foundation and +SocialGood events, both in person and online, adding to her unique perspective to the conversation around issues from climate change and community organizing to the role of media in the 21st century.

The magazine’s annual “Person of the Year” announcement comes at a time when the spread of propaganda, “fake news” and threats against the press have spiked. In order to help address this growing threat, the United Nations launched its first-ever strategy to address the problem of journalists’ safety and the problem of impunity last year. One of the strategy’s goals is to strengthen the legal mechanisms that support the right to freedom of speech and information.

The UN Foundation has long supported journalism as a bedrock for peace and progress in the world. From connecting journalists to experts on the SDGs, to honoring a journalist with one of our Global Leadership Awards this year, we’ve seen the power of journalists to shine a light on the issues that matter to us all.

Today – and every day – we’re celebrating the work of “Guardians of Truth” like Maria and all of the journalists across the globe who risk their own safety to report on violence, injustice, and corruption.

“It’s bittersweet, and it’s daunting,” Maria told CNN. “Look at the challenges we are facing … But what strengthens all of us is that there’s probably no better time to be a journalist, because this is when we live our values and we live our mission.”

Defending Journalism on World Press Freedom Day and Every Day