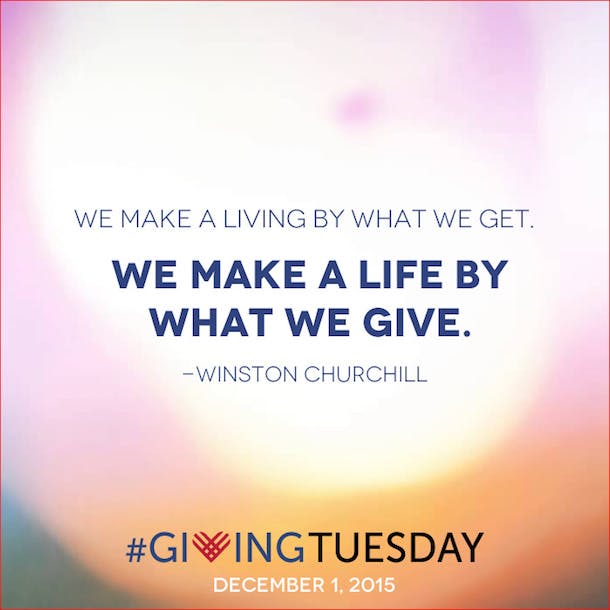 What happens when the philanthropic sector embraces innovation? Big change.

When I worked at AOL, we helped grow Cyber Monday to make holiday shopping easy and accessible to people everywhere. Philanthropy should be the same – and through innovation and technology, we’re entering a new era in which anyone can be a philanthropist.

In 2012, the United Nations Foundation joined forces with the 92nd Street Y and a range of creative partners to start #GivingTuesday, a dedicated day in the holiday season (December 1 this year) to celebrate giving. Our philosophy was simple: Create a bottom-up movement that encourages people to give back in whatever way works for them – whether donating to a cause close to their heart, volunteering in their communities, or using their voice and social media networks to raise awareness of an issue.

As #GivingTuesday enters its fourth year, the movement has grown to more than 30,000 partners in more than 65 countries. Collectively, we have raised tens of millions of dollars and shared hundreds of thousands of messages on social media, bringing new awareness and resources to help solve some of the world’s biggest challenges.

#GivingTuesday is part of a broader shift in philanthropy: Philanthropy is being democratized.

Long associated with millionaires, philanthropy now belongs to everyone. Through technology and digital communications, people of all ages and all backgrounds can get involved in an issue, whether it’s making an online donation to a group on the other side of the planet or starting a petition to mobilize a community of advocates to push for change.

The belief that anyone can make a difference is at the core of the United Nations Foundation’s work. Ted Turner created the UN Foundation because he believes that everyone – not just governments – can play a role in supporting the work of the United Nations, the organization with the global reach to drive big change.

The UN Foundation’s partners include parent bloggers who use their platforms to raise awareness about the need to expand access to vaccines, teen girls in the U.S. who write their elected officials to pass legislation addressing child marriage, and faith groups and students who donate $10 to send an anti-malaria bednet to a family who needs it.

This community is about more than charity; it’s about change. People understand that resources are important, but they also want to be deeply engaged, learning about the issues and donating their time, ideas, and voices to help the UN save and change lives.

For example, we’ve been able to get the measles vaccine to more children – saving an estimated 17 million lives since 2000. And our efforts to prevent and treat malaria have saved more than 6 million lives in the same timeframe. These are just a few examples of the progress the international community is making because we’ve come together to act.

We’ve got big challenges ahead, but we have the opportunity to grow the community dedicated to solutions. By working together, we can go further and faster to build a better world. We hope you will join our #GivingTuesday campaigns by visiting unfoundation.org/givingtuesday.

As our Founder Ted Turner says: “You do not have to be a world leader – or even a billionaire – to make an impact. If we are going to turn things around, we all need to do our part to make it happen. Change starts with you.”