Immunization as the Gateway to Health: Why Women Hold the Key in Pakistan

Immunization as the Gateway to Health: Why Women Hold the Key in Pakistan

Editor’s Note: This post is part of the blog series, “Her Goals: Our Future,” which highlights the connections between girls and women and the Sustainable Development Goals. Guest blogger views expressed here do not necessarily reflect the views of the UN Foundation. This post originally appeared on Gavi’s blog, Vaccineswork. 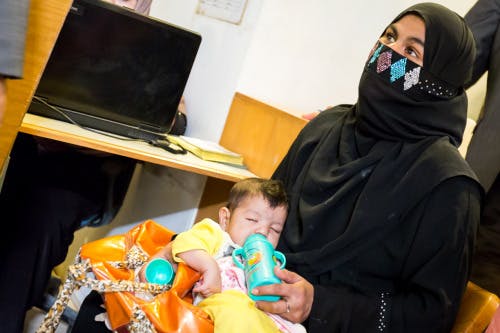 Her name was Nusarat. She was young and petite with gleaming, hopeful eyes – the only thing I could see from behind her veil. She had a four-month-old baby on her lap whom she had brought in to be vaccinated. She told me she was 22 years old, got married at 20, and had two children in quick succession. As she was not happy with the situation, she had now decided to start family planning. When I asked what contraception she used, she blushed and said, “We are doing something.”

She also told me that her first child was not vaccinated until she, on a friend’s advice, came to get a tetanus shot during her second pregnancy. Only then was she informed about child vaccination and its benefits. It was clear that Nusarat would not talk about these personal issues unless it was to a woman who seemed friendly and supportive.

Several young mothers like Nusarat were waiting patiently and silently for their turn at the crowded immunization site in a large slum in Lahore. The male vaccinator was concentrating on giving shots to the children, somewhat mechanically. Still, it was rewarding to see children receiving protection against life-threatening diseases. Child mortality rates remain high in Pakistan – more than 1,000 children die every day before celebrating their 5th birthday, and vaccine-preventable diseases account for half of these deaths (pneumonia causes 27% of child deaths and diarrhea another 20%, with measles and meningitis also claiming many young lives).

It was hard to argue with the vaccinator’s single-minded focus on injecting vaccines. The site was cramped, most women were inhibited in communicating with him and he had to simultaneously vaccinate and fill in the details of each child in the register on his table. Concentrating on the task at hand, he did not encourage any conversation.

But the scene left me with several questions. Does the fact that Pakistan only has male vaccinators inhibit coverage? Do some women find approaching a male vaccinator a barrier that is difficult to cross and therefore decide not to take their children to be vaccinated? Are precious opportunities for integration with other health services being lost unnecessarily?

In most countries supported by Gavi, it is customary to have female frontline health workers.

Often they do not only vaccinate children but also take the opportunity to talk to mothers about a range of maternal and child health issues. Even though we would all like to see fathers more involved in childhood immunization, in reality it is still almost always mothers who bring their children to vaccination sessions.

Understandably, it is easier for women to have a conversation with a female health worker around issues of contraception or breastfeeding. In a cultural setting like Pakistan, in particular, where women may be diffident and constrained in their communication with unfamiliar men, not having female vaccinators could be a serious missed opportunity for delivering immunization together with other reproductive, maternal, and child health services.

There is increasing recognition that immunization can be the gateway to a range of other health services. Vaccination can be leveraged to bundle services and generate broader awareness, not just around reproductive, maternal, and child health but also issues like sanitation, nutrition, and hygiene.

During my previous visits to Laos and the Democratic Republic of Congo, I saw efforts in this direction. Another example is my own country, India, which has repositioned immunization days as Village Health, Sanitation, and Nutrition Days. The aim is to mobilize the country’s 150,000 female frontline health workers to use outreach immunization sessions more effectively to the benefit of mothers, children and communities.

Pakistan has already started training its Lady Health Workers to provide immunization, replacing the current model of male-only vaccinators. This could be a turning point for expanding immunization coverage through better communication and trust-building with mothers. Immunization sessions could then finally be used to their full potential.

By Anuradha Gupta, Deputy CEO of Gavi, the Vaccine Alliance