How Fiorello La Guardia Helped Refugees and His Own Sister

How Fiorello La Guardia Helped Refugees and His Own Sister 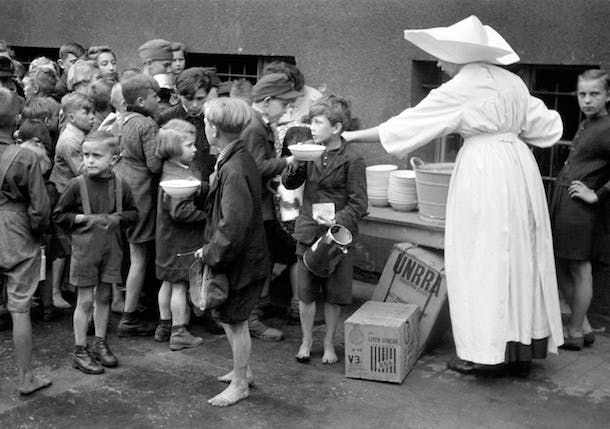 On November 9, 1943, 44 nations established UNRRA. At that point, the term “United Nations” still referred solely to the Allied powers fighting in World War II. The UNRRA agreement stated that liberated populations would “receive aid and relief from their sufferings, food, clothing and shelter, aid in the prevention of pestilence and in the recovery of the health of the people, and that preparation and arrangements shall be made for the return of prisoners and exiles to their homes and for assistance in the resumption of urgently needed agricultural and industrial production and the restoration of essential services.”

The organization reached its zenith in mid-1946 under La Guardia’s directorship. From the headquarters in Washington D.C., La Guardia oversaw nearly 25,000 staff in offices around the world. Before operations fully wound down in 1947-48, UNRRA had spent nearly $4 billion on relief and rehabilitation. UNRRA’s operations would be transferred to multiple agencies, including the World Health Organization and the International Refugee Organization.

UNRRA did not just feed and clothe people in devastated countries in Europe and Asia. It also helped displaced persons return to their home countries or find a new home elsewhere. Amongst them was La Guardia’s sister, Gemma.

Gemma and Fiorello had an Italian Jewish mother. The two siblings had grown up in New York, but traveled frequently to their mother’s hometown of Trieste in Italy. Fiorello decided to study law in New York and rapidly rose through the political ranks.

Meanwhile, Gemma taught English in Trieste and married one of her students — a Hungarian Jewish man named Herman Gluck. Gemma and Herman moved to Budapest, Hungary. They had a daughter named Yolanda who married a Hungarian merchant named Erno Denes.

In March 1944, German troops occupied Hungary to prevent the Hungarian government from secretly negotiating for peace with the Allies. That same month, Yolanda and Erno had a baby boy named Richard. The Nazis installed a pro-German prime minister in Hungary, who eagerly rounded up Jewish people. In under eight weeks, around 440,000 Jews were deported, mostly to Auschwitz.

Gemma and her husband were arrested at their apartment in Budapest on June 7, 1944 and brought to Mauthausen, a concentration camp in Austria. Gemma was transferred from Mauthausen 12 days later and lost contact with Herman. She ended up in Ravensbrück, a concentration camp for women located just north of Berlin. The Nazis realized that she was Fiorello La Guardia’s sister and almost certainly kept Gemma alive because she was a potentially useful political prisoner. She survived on turnips and potato peelings.

Yolanda and her family only avoided imprisonment for seven weeks longer than Gemma and Herman. Yolanda’s husband, Erno, was arrested on August 1, 1944. Three generations of the family reunited in April 1945 when Gemma discovered that Yolanda and Richard were in Ravensbrück too.

A few months later after liberation, the women were already feeling better and living with a family in Berlin. In July 1945, Gemma managed to start corresponding with Fiorello. Gemma begged Fiorello to: “Keep it up, try to find our husbands and get us soon over to U.S.A.”

Like in his public administration of New York, Fiorello was law-abiding to a fault. There was no proper mail connection yet between the U.S. and Germany, and Fiorello refused to use non-legal methods of communication. It took him three and a half months to send Gemma a letter in reply through the American Red Cross.

Fiorello came straight to the point. He cared about his sister, but he refused to give her any special treatment. He was mayor of New York City and wanted to stick to the rules. “No exceptions can be made,” Fiorello wrote bluntly. Her case, he emphasized repeatedly, was “the same as that of hundreds of thousands of displaced people.”

The issue was particularly difficult, because Gemma had lost her U.S. citizenship when she had married her Hungarian husband. Her daughter and grandson were thus not American citizens and had no rights to enter the U.S. Fiorello would have to sponsor them, though this would be tricky with the very restrictive American immigration legislation.

The Danish authorities granted the family a short-term visa in January 1946. They ended up in Hellerup, a town near Copenhagen. A few months later, Gemma discovered from a newspaper article that her husband had passed away in Mauthausen, where Yolanda’s husband had also died. Upon Herman’s death, Gemma had actually regained her American citizenship. But Yolanda and Richard still needed visas.

In April 1946, Fiorello had taken up office as Director-General of UNRRA. But he still used the proper channels for his family. In June, he sent an affidavit to the State Department asking for quota visas for Yolanda and Richard to travel with Gemma to New York.

It took a year, but in April 1947, Gemma wrote excitedly that Yolanda and Richard finally had received Quota No. 801 and 802.

While the vast majority of displaced persons had no famous relatives, they suffered from similar problems. It frequently took years to reunite families or to discover the deaths of loved ones. To help, UNRRA created a Central Tracing Bureau to try to bring relatives back together.

Some displaced persons waited months or years for visas. UNRRA was often overwhelmed by sheer numbers. The movement of millions of refugees was complex to coordinate. There were conflicts within UNRRA itself about what international relief should look like. Often, much administration was out of UNRRA’s control. Visas depended upon governments’ decisions about how many refugees their country would take or where refugees might be sent. Only in 1948, for instance, did the U.S. Congress pass the Displaced Persons Act that allowed over 200,000 displaced persons to immigrate to the United States.

In comparison to other refugees, Gemma had reached New York fairly swiftly. But her arrival in May 1947 was no fairy tale ending. The siblings were reunited mere months before Fiorello passed away from pancreatic cancer in September 1947.

Gemma had lost everything in World War II and was already in her late 60s. She lived until her death in 1962 in Queens, in a public-housing project built by her brother’s administration.