8 Good News Stories You May Have Missed in 2018

8 Good News Stories You May Have Missed in 2018

2018 was a rough year. Communities across the globe experienced the real and worsening effects of climate change; conflict continued to displace a record number of families; and refugees, migrants, and minorities continued to be scapegoated for economic, political, and social instability.

But this year also ushered in some positive developments — and many of these stories didn’t make the headlines. While it may not make the news, time and again, we’ve seen that collective action leads to global progress.

So here’s the good news you might have missed in 2018: 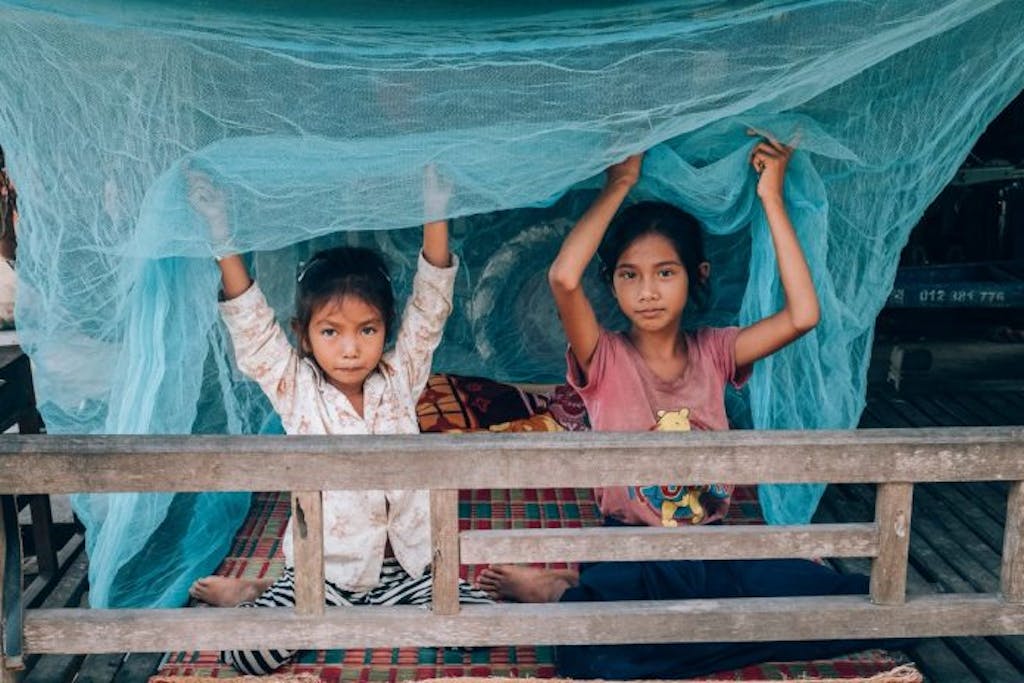 Children sit beneath an insecticide-treated bed net that protects against mosquito-borne malaria. (©/WHO)

In June, Paraguay became the first country in the Americas in nearly 50 years to be declared free of malaria. The World Health Organization (WHO) only grants malaria-free certification when a country records zero cases transmitted within its borders for three consecutive years. WHO supported Paraguay’s efforts by helping to fund robust case management, community engagement, and training of front-line health workers. According to WHO’s Elimination 2020 initiative, 10 other countries are on track to be malaria-free in the next two years.

Malaria remains one of the planet’s deadliest diseases, claiming the life of a child every two minutes. Nearly half of the world’s population is at risk, and pregnant women, refugees, and children are the most vulnerable. Yet malaria is also one of the most easily treated and prevented diseases, thanks to household spraying and insecticide-treated bed nets. Action against malaria by the global community — including UN agencies and supporters of the UN Foundation’s Nothing But Nets campaign — has saved 6.8 million lives since 2000. 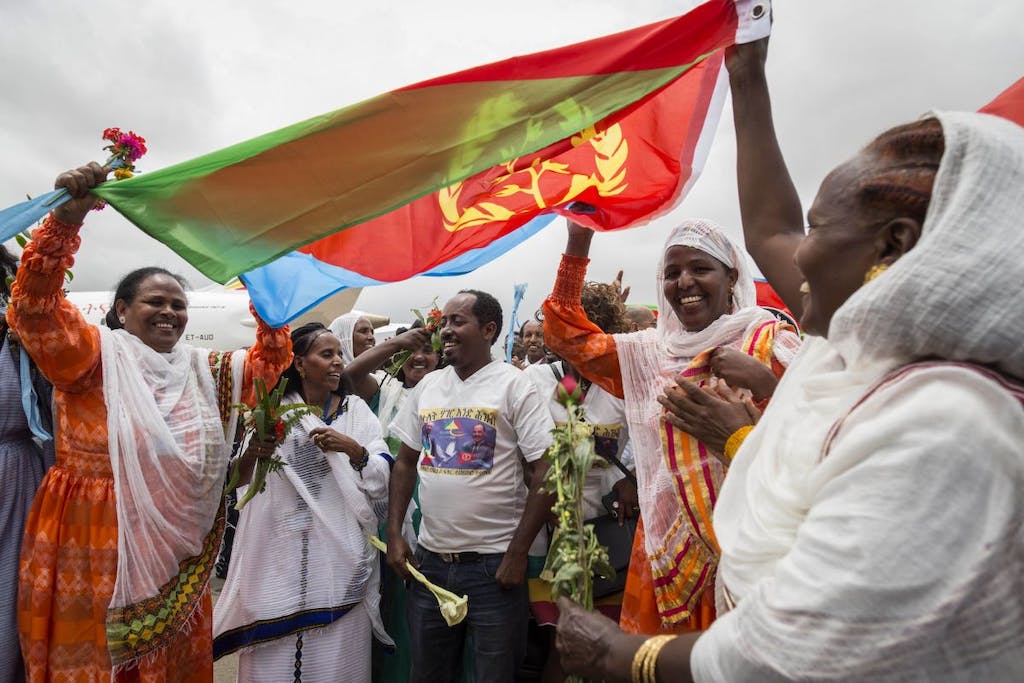 Holding up their flag, citizens of Eritrea welcome passengers from neighboring Ethiopia on the first commercial flight between the two nations in 20 years. (©Michael Tewelde/AFP/Getty Images)

This year, after more than two decades of hostility, Ethiopia and Eritrea formally ended their longstanding conflict. In a joint statement in June, Ethiopian Prime Minister Abiy Ahmed and Eritrean President Isaias Afwerki declared that “a new era of peace and friendship has been opened,” announcing plans to restore trade, travel, communication, and diplomacy between the two countries. “There is no longer a border between Eritrea and Ethiopia because a bridge of love has destroyed it,” Abiy told the New York Times.

Citizens from both countries reacted with joy; the dispute had separated thousands of families that could now reunite, including one journalist who hadn’t seen his daughters in nearly 20 years. UN Secretary-General António Guterres hailed the move as a “wind blowing in the direction of peace” in Africa, saying he hopes the nations’ reconciliation inspires other countries mired in conflict to do the same. Last month, the UN Security Council unanimously voted to lift international sanctions against Eritrea in response to the country’s renewed diplomatic relations. 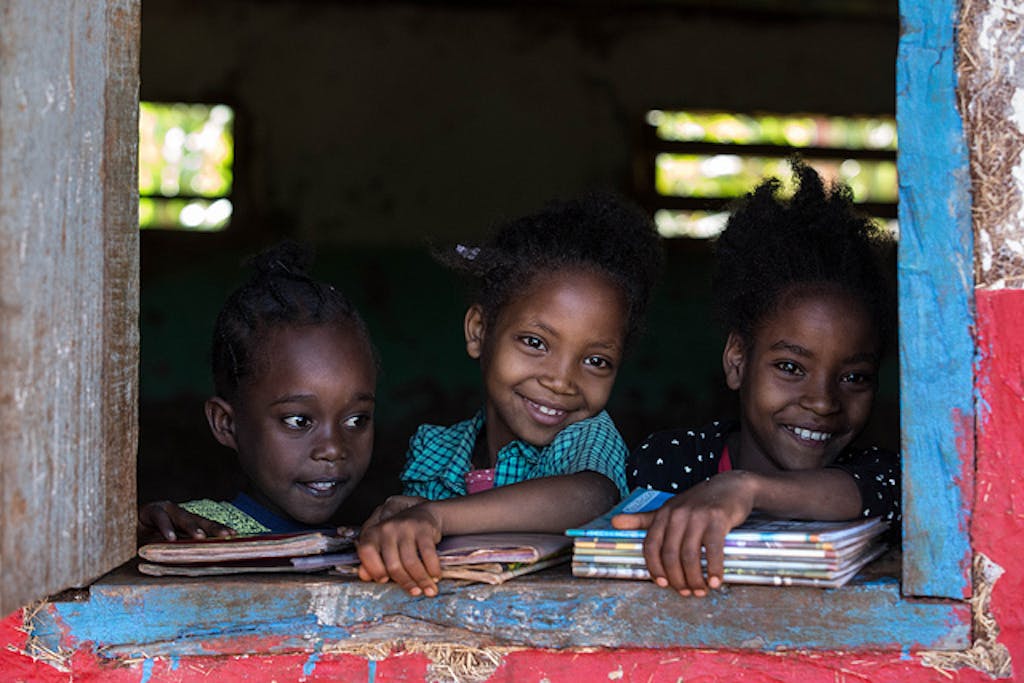 Students at the Guracha Jeldu Primary School in Ethiopia. (©UNICEF/Ethiopia)

For the first time since the World Bank began collecting global statistics, the percentage of people living in extreme poverty has fallen below 10% — down from 36% in 1990.

In a report released in September, the World Bank found that one in 10 people on the planet—roughly 736 million people—live on less than $1.90 per day.  “The global poverty rate is now lower than it has ever been in recorded history. This is one of the greatest human achievements of our time,” World Bank Group President Jim Yong Kim said during the report’s launch.

In the past 25 years, the number of people living in extreme poverty has declined by more than 1 billion. The Sustainable Development Goals, adopted at the UN in 2015, set a goal of “zero extreme poverty” by 2030. 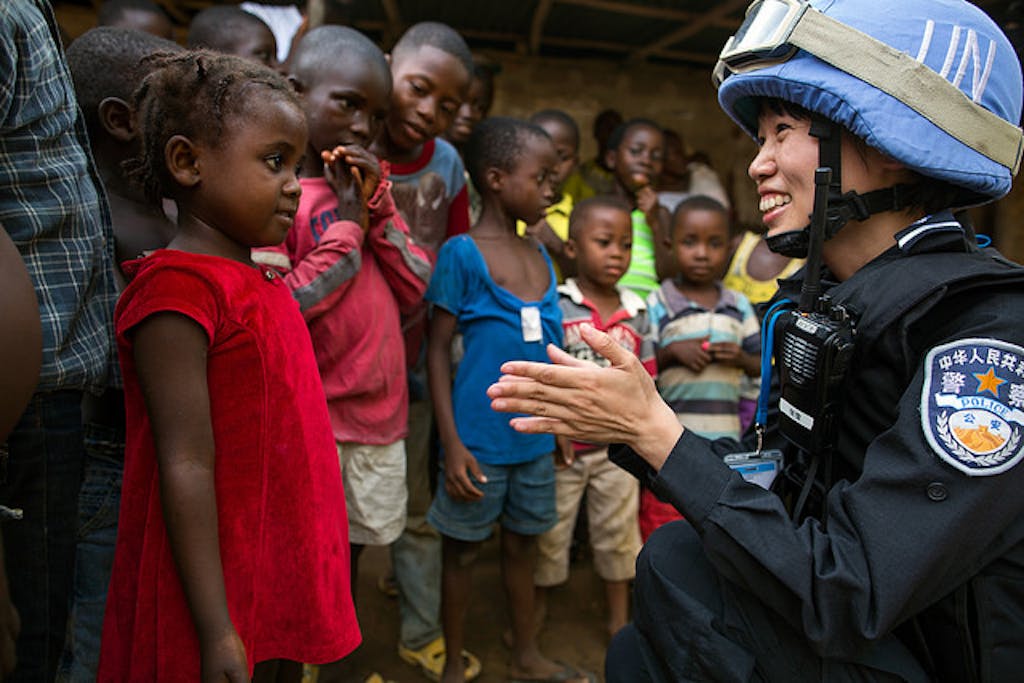 As the UN Foundation’s Chandrima Das pointed out earlier this year: “Conflict often makes the news, but what about peace?” In April, the UN formally ended its peacekeeping operation in Liberia following a landmark election that led to the country’s first transfer of power from one elected president to another in almost 75 years. In his inaugural address, Liberia’s newly elected President George Manneh Weah thanked the UN for helping to make this progress possible. “In our darkest days, the UN stood with us,” he said.

Civil war first broke out in Liberia in 1989 and again in 1999, eventually displacing nearly one-third of the country’s population and killing more than 250,000 people. During the height of the conflict, as many as 80% of Liberian women and girls suffered sexual violence. After a ceasefire was formally declared in 2003, UN peacekeepers  remained on the ground to help the people of Liberia restore the rule of law. This meant working to disarm 100,000 combatants, professionalizing the country’s police force and army, and helping the country carry out democratic elections. UN peacekeepers also helped communities rebuild vital infrastructure to restore the economy.

While the peacekeeping mission is over, agencies like the UN Development Program continue to support the country’s most vulnerable communities. “Traveling through Liberia, I saw a lot of possibility,” Das said after visiting Liberia earlier this year. “Although many families struggle with poverty, the nation is rich in resources…What I saw in the present was heartening and hopeful.”

Listen to the UN Dispatch podcast about the UN’s peacekeeping success in Liberia.

As the Trump Administration stepped back from climate leadership, including announcing its intent to withdraw the U.S. from the UN’s landmark Paris Agreement, a bipartisan group of 17 governors launched the U.S. Climate Alliance— hosted at the UN Foundation— to move forward at a state and regional level. In 2018 the alliance announced plans to channel $1.4 billion into driving down auto emissions and reducing pollutants while recruiting more state and local leaders to join their efforts.

This year also welcomed the first-ever Global Climate Action Summit, which mobilized more than 4,000 local and UN leaders, citizens, entrepreneurs, and activists in the fight against climate change. From the CEO of Starbucks to the Prime Minister of Barbados, leaders representing a wide range of sectors and industries announced record-breaking investments in renewable energy. A total of 29 philanthropists pledged $4 billion over the next five years — the largest-ever philanthropic investment focused on climate action.

Cities are stepping up too. New York City recently pledged to double its pension funds in climate solutions to a total of $4 billion over the next three years. Washington D.C. just passed a historic bill mandating 100% renewable electricity by 2032 and zero-emissions transportation by 2045. This fall, the cities of Honolulu, Sydney, Los Angeles, and Rotterdam joined the Powering Past Coal Alliance in phasing out traditional coal-fired power plants, a leading contributor to climate change.

6. Women Leadership On The Rise 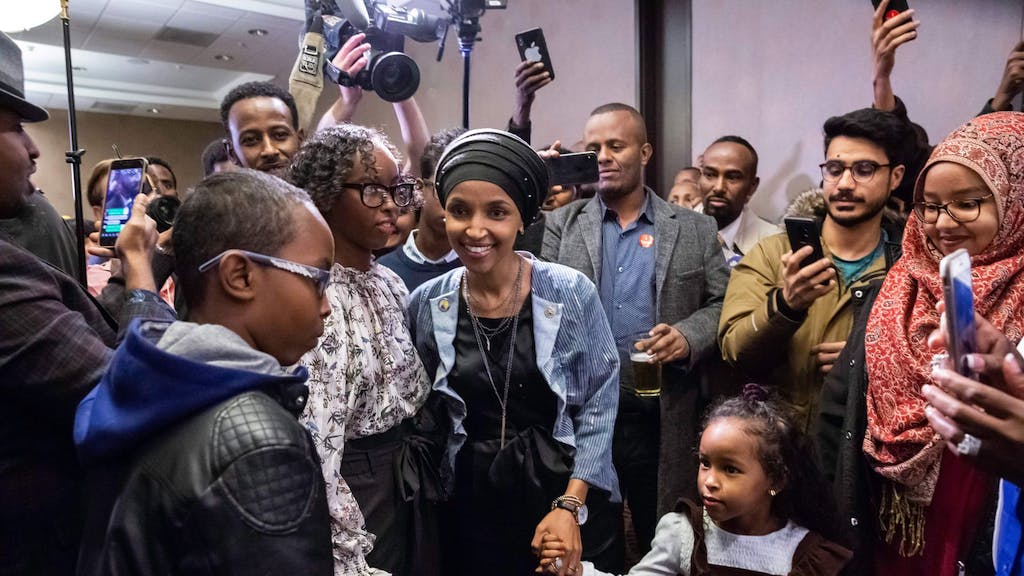 In 2018, more women around the world ascended to positions of power. Ethiopia elected its first female president. The UN achieved gender parity among its leadership for the first time. Americans elected more women to U.S. Congress than any other period in the country’s history. In New Zealand, Prime Minister Jacinda Arden became the second female head of state to give birth in office and the first to bring her infant daughter to the UN General Assembly.

Meanwhile, more women of all backgrounds and beliefs spoke out against gender-based violence, harassment, and discrimination in their own communities and workplaces. As a result, dozens of executives across a range of industries — from professional sports to politics — resigned after survivors came forward to stand up and seek justice.

To help unlock gender equality across the globe, UN agencies from UNICEF to UN Women are supporting efforts to improve access to education, health care, finance, food, and legal protection, and the UN has partnered with the EU on a Spotlight Initiative to stop gender-based violence. For our part, the UN Foundation is working to expand access to voluntary family planning, strengthen women’s health, and support adolescent girls in realizing their rights. 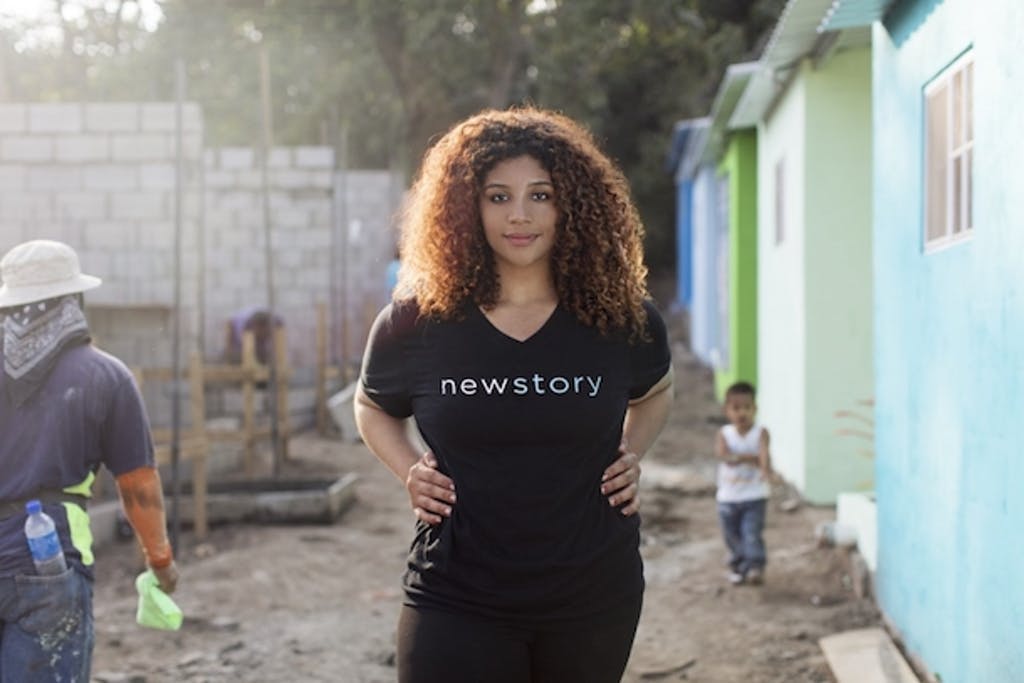 In many ways, the story of 2018 was the story of individuals across the globe stepping up in their own communities to do good, give back, and help the world achieve the Sustainable Development Goals.

Take Maria Ressa, a Filipino journalist and advisor for the UN Foundation’s +SocialGood community, who was among four groups of journalists named TIME’s 2018 Person of the Year for her work as a “Guardian of Truth.” Thanks in part to her online news site Rappler, she has helped uncover numerous human rights abuses by the Philippines government. A couple in California named Poonam and Nishkaam Mehta donated their wedding budget to kickstart a fundraiser for the UN World Food Programme (WFP); this year they reached their goal of crowdsourcing enough money to deliver 1 million meals through WFP’s ShareTheMeal app. Teach for America alum Alexandra Lacfi co-founded a company that is harnessing the power of 3-D technology to build sustainable housing in poor communities. More than 500 members of the UN Association of the United States of America (UNA-USA) visited nearly every lawmaker on Capitol Hill to lobby on behalf of the UN’s work supporting the world’s most vulnerable.

These are just a few examples of inspiring individuals who are working toward global goals like zero hunger, sustainable housing, and peace and justice. 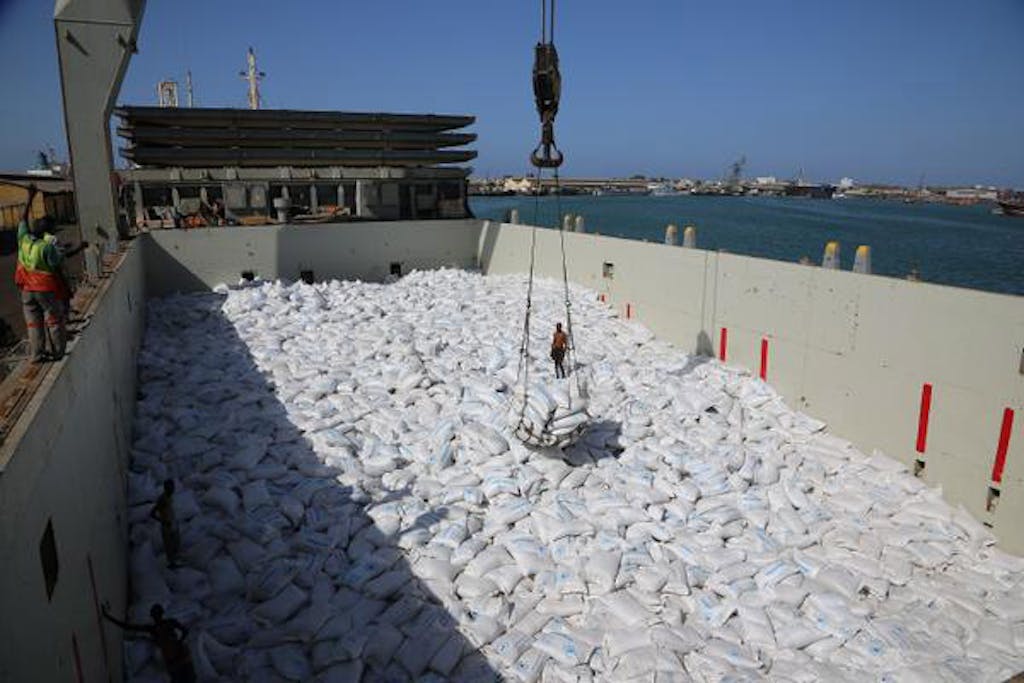 More than 5,700 metric tons of food and humanitarian aid is unloaded at the Yemeni port city of Aden in 2015. (©WFP/Dina Elkassaby)

Just last week, the UN helped broker a ceasefire in Yemen’s embattled port city of Hodeidah, where nearly 80% of the country’s food supply is imported. During negotiations in Sweden, the conflict’s warring parties agreed to withdraw from Hodeidah within 21 days under the supervision of a UN-led committee. This could enable aid agencies like WFP to deliver humanitarian aid, like food and medical supplies, to families in need as the threat of famine looms.

The conflict in Yemen has pushed more than 8 million people to the brink of starvation and resulted in the planet’s largest humanitarian crisis. Right now nearly three-fourths of Yemen’s population rely on humanitarian relief from the UN and other aid agencies to survive.

But this latest development comes with an enormous caveat: This is only good news if the ceasefire holds; and this will require world leaders to maintain pressure on both sides to lay down their arms.

As one of the architects of the Paris Agreement recently pointed out, a constant stream of negative news isn’t just demoralizing, it can also be paralyzing. “ Apocalypse fatigue” — the human reflex to avoid problems that seem too large to solve by individual action — is a very real phenomenon.

But complacency is not the answer, and everyday actions do add up. When we work with the UN and one another, when we speak up, and vote — with our wallets, our lifestyles, and our ballots — positive change is possible.

These stories illustrate that here is good news out there. We are making progress. And everyone, everywhere can play a part.

Learn how you can make a difference in 2019.

Wins for the World