Gender Based Violence: Much More than Broken Bones

Gender Based Violence: Much More than Broken Bones 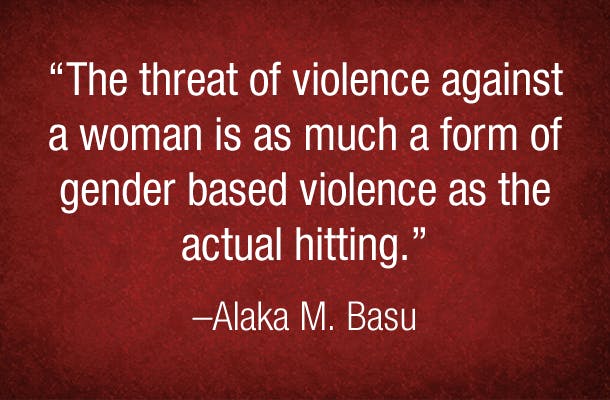 November 25 was the International Day for the Elimination of Violence Against Women and December 10 was Human Rights Day.  In a blog on November 25, I had commented on the impact on reproductive health of violence against women. If my piece had appeared on December 10, I would have added that violence against women is also a human rights violation and not just an assault on women’s reproductive health and rights.

The WHO report that I referred to in that post alerts us to some other things as well. In particular, it encourages us to expand our definition of violence against women to go beyond the physical bruising that the word “violence” usually conjures up in our minds.

One of the interesting tangential points made by this report is that the threat of violence against a woman is as much a form of gender based violence as the actual hitting, knifing, or raping that surveys usually ask questions on. That is, most of the time, there is no need at all for an intimate partner or a stranger to actually raise his hand – knowing (usually from past experience) that he can do so or being told that he might do so is usually enough to cow a woman into submission – whether it is by making sure she cooks a hot dinner, does not talk to an unrelated male, or submits to unprotected sex. Indeed, routinely expressing such credible threats is much more effective than actually using physical violence. Not only do women fall in line, threats rarely constitute a criminal offense because they are so much harder to prove than a knife gash, a broken bone, or a miscarriage – all common outcomes of gender based physical violence.

Related to this, but not quite the same, is the question of what may be called psychological violence. We now know that verbal abuse, taunts, disrespect, and dismissal can have profound effects on the health of those subjected to these forms of abuse and the WHO report discusses this form of violence with supporting biomedical evidence on the kinds of mental, emotional, and eventually reproductive health impact of the stress and distress it can lead to. Moreover, the notion of human rights includes the right to live a life of dignity, and such psychological violence is therefore a denial of human rights as much as it is an expression of gender based violence. In such a perspective, the period between November 25 and December 10 tightens more fully the circle of intimate connections between gender based violence and human rights.