When we met 10 years ago, I didn’t think much of it when my husband told me that he had been treated for tuberculosis (TB) as a child. Since then, I’ve seen firsthand the effects TB has on families, and I realize how fortunate my husband was to have access to diagnosis and effective treatment.

Visiting TB hospital wards has shown me the isolation, stigma, and physical deterioration that TB causes. Meeting TB patients and survivors like Louie Zepeda from around the world has been bittersweet. The people I have met are on the mend, but TB, a bacteria spread through the air, causes 1.5 million deaths per year – that’s 4,000 people each day. Moreover, it often infects people who live together in close quarters and regularly infects multiple people in the same family.

It is astonishing that a quarter of the world’s population (2 billion people) is infected with TB. It is even more worrisome that 3 million of the 9 million new cases each year are not detected or treated. But with political commitment and financing, great progress has already been made against TB.

The UN Millennium Development Goals served as a call to action against TB. Between 2000 and 2014, TB incidence dropped by 1.5% each year, and 43 million lives were saved through TB diagnosis and treatment.  To reach the Sustainable Development Goals target to end the TB epidemic by 2030, this progress must accelerate. 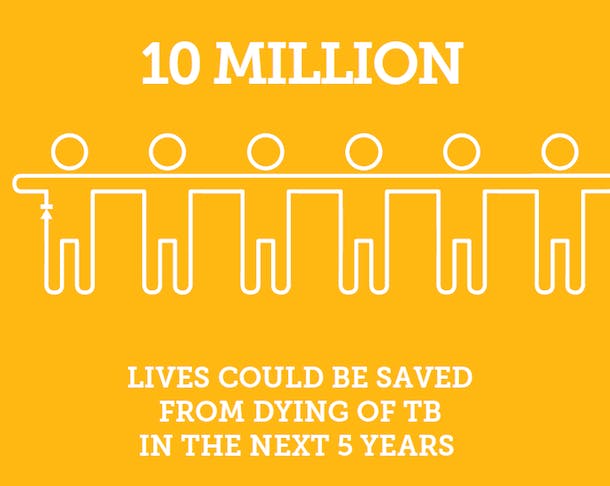 Here are some actions you can take this World TB Day (March 24) to join the fight against this deadly disease:

1. Ask your government to support the Global Fund to Fight AIDS, TB and Malaria. The Global Fund provides 80% of all global TB funding and has tested and treated 15 million people with TB since 2002. Every three years, governments, the private sector, and private foundations convene to pledge resources to this financial institution, which provides support to country-led efforts against these three diseases. The next pledging conference will happen this year, and funding decisions are currently being made. Urge your representatives to pledge robust funding for the Global Fund this year.

2. Join the Unite to End TB Campaign. This campaign will promote the fight against TB through social media. Change your profile photo on Twitter and Facebook to include a red arrow. Share photos of memorable friendship moments on social media with #UnitetoEndTB to inspire others to work together to fight TB. Share messages and content provided by the campaign.

3. Donate to the Stop TB Partnership which works with 1,300 partners all over the world in the fight against TB. Just $10 can diagnose a person in two hours, and $30 can cure a person with TB.

4. Learn more about TB, and share your knowledge with others. The World Health Organization (WHO) and the Stop TB Partnership are a good first stop for learning more. WHO’s annual Global Tuberculosis Report is a more comprehensive and in depth read.