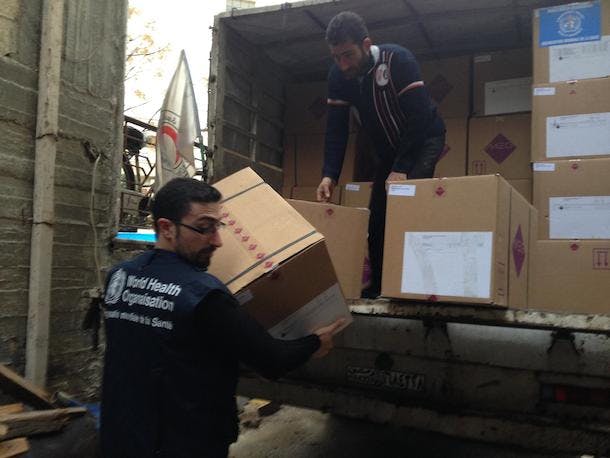 Amal is a five-year-old Syrian girl who loved having tea parties with her cousins. In 2013, she was diagnosed with cancer – a tumor in the nervous system – and is being treated at the Children Hospital in Damascus.

The crisis in Syria, which enters its fifth year this month, has devastated Syria’s health system and led to severe shortages in treatments for ailments from heart disease to cancer.

“It is really disturbing to see how this conflict is continuing and negatively affecting people’s lives from every corner,” said Elizabeth Hoff, the World Health Organization (WHO) Representative in Syria. “We are trying the best we can to meet the needs.”

WHO has helped provide cancer medicines to hospitals in Syria so other children like Amal can get the care they need – one element of the aid WHO and partners are providing to Syrians in need.

The United Nations Foundation recently spoke with the World Health Representative in Syria about the challenges facing Syrians in need, what WHO is doing to alleviate the impact of the crisis on the populations in need, and how individuals can support those efforts. Here are some of the key takeaways from the conversation:

The difficulties for health care services delivery in Syria include:

As the crisis continues, WHO – along with other UN agencies and humanitarian partners – continues to provide aid to those in need. WHO’s work includes:

HOW YOU CAN HELP

The humanitarian response in Syria continues to be severely underfunded. WHO needs resources and support to provide aid to people in need.

Each of us can help raise awareness, share information, and advocate for these resources. As Hoff said, “Everybody has a role to play.”

Tweet this: “Everybody has a role to play.” Raise your voice to support @WHO’s work to help Syrians in need. #WhatDoesItTake