Big News on Ebola: The End of the Outbreak

Big News on Ebola: The End of the Outbreak 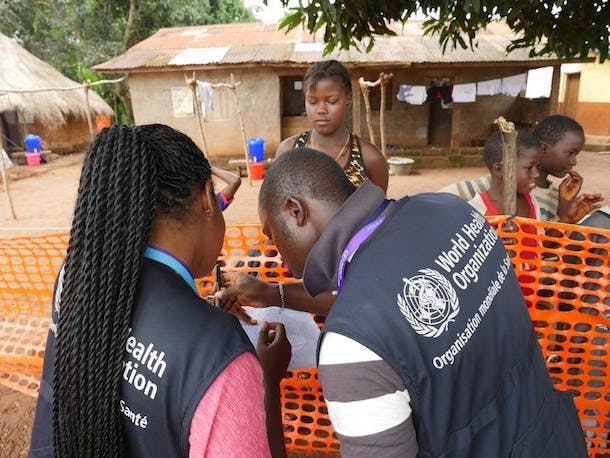 Editor’s Note: The World Health Organization (WHO) has noted that there is a risk of Ebola flare-ups in affected countries as the virus persists in survivors after their recovery, and as of January, 15, 2016, WHO confirmed a new case of Ebola in Sierra Leone. The Sierra Leone government, WHO, and partners are rapidly responding to this new case. Immediate action in responding to flare-ups and strong surveillance systems are needed to halt human-to-human transmission of Ebola completely.”

Today, the World Health Organization (WHO) declared the end of the deadliest Ebola outbreak ever recorded in history. Since the first suspected case of Ebola appeared in Guinea in December 2013, the virus has infected nearly 30,000 people, and over 11,300 people have died. The outbreak also devastated economies and health systems, leading to losses of approximately $2.2 billion and increased morbidity and mortality due to diseases like malaria and measles among the three most affected countries of Liberia, Guinea, and Sierra Leone.

Ebola transmission in a country is declared to have ended 42 days (twice the length of the virus’ incubation period) after the last detected case tests negative two times. “Detecting and breaking every chain of transmission has been a monumental achievement,” declared Dr. Margaret Chan, WHO Director-General.

However, caution is needed as flare-ups are expected, which is why strong surveillance and response systems are critical in the months to come, especially since the virus can persist in survivors even after recovery.

During the last two years, the international community responded to the Ebola crisis at an unprecedented scale. The UN Security Council authorized a first-ever global response of its kind through the UN Mission for Ebola Emergency Response (UNMEER). Key UN partners, including WHO, UNICEF, the World Food Programme (WFP), the Office for the Coordination of Humanitarian Affairs (OCHA), UNFPA, and others marshalled and coordinated funds, technical assistance, and lifesaving commodities from around the world.

More than 50 nations contributed to the response, pledging over 5 billion US dollars in total to the Ebola response, recovery, and research and development efforts.

Thousands of health officials traveled to West Africa to conduct trainings on proper care and to help operationalize the Ebola response, including over 3,000 from the United States alone.

Businesses mobilized to contribute funds and protect their workforce and partners through the Ebola Private Sector Mobilization Group. In large part due to these coordinated efforts, Ebola cases declined from 950 per week in September 2014 to zero today.

Bolstered by this global response, the governments and citizens of Guinea, Liberia, and Sierra Leone showed remarkable resilience in leading the charge to end the epidemic. Health workers risked their lives to care for those affected. Communities welcomed children orphaned by Ebola with open arms. Government bodies developed systems to manage response efforts. Volunteers organized to support their communities and spread lifesaving information.

Everyone had a role to play in ending the Ebola outbreak. If we lacked a single piece of the Ebola puzzle – the heroism of health workers, the extraordinary resilience of West Africa’s people, the generosity of nations and businesses from around the world, and the expertise and support of the UN – we might still be fighting this epidemic. Of course, we all wish the response was faster, resources mobilized at higher scale, and the global architecture more nimble.  Now, the challenge will be to ensure we learn those lessons to ensure that this never happens again.

A key piece of that puzzle is building WHO’s capacity to prevent, detect, and control outbreaks and support at-risk countries in building resilient public health systems. Later this month, when WHO convenes its Executive Board, we will have a significant opportunity to address this need for a strong and supported WHO, and the international community must do its part to deliver on that opportunity.