This is a guest post by Joey Blumenfeld,‎ Director, Corporate Social Responsibility at AOL.

To AOL, #GivingTuesday is more than just a day. AOL’s #GivingTuesday support raises awareness around the specific day while simultaneously seeking to build a larger culture of giving. Here’s how we’re chipping in: 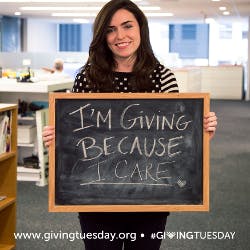 Even with this all this support, December 2nd is just the beginning. 365 days per year AOL offers its scale, content and technology to support its non-profit partners. We provide causes with access to our front doors like AOL.com and Huffington Post in order to reach and educate millions on both national and hyper-local levels. To date, we’ve provided over 60 billion pro bono impressions on behalf of over 500 non-profit partners! Let’s work together and make #GivingTuesday a way of being.