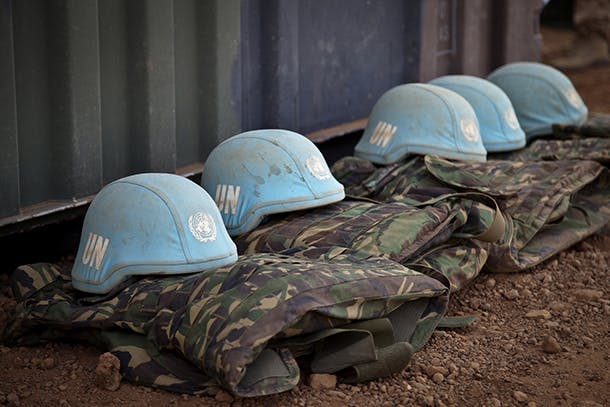 On Wednesday, May 18, a UN Peacekeeping convoy hit an improvised explosive device and later came under fire from armed assailants. This horrific attack killed five peacekeepers and injured three others from the United Nations Multidimensional Integrated Stabilization Mission in Mali (MINUSMA).

Wednesday’s attack was unfortunately not an isolated incident. In fact, it was the 12th attack targeting UN Peacekeepers in Mali this year.

Despite the constant threat, there are more than 9,000 UN Peacekeepers currently deployed to help stabilize the country and assist in the peace process between the Malian government and rebel groups following a 2012 coup.

Unfortunately, jihadist groups continue to act as spoilers to the peace process, launching attacks against the UN and against civilian targets — like hotels and businesses. What’s more, peacekeepers in Mali are not alone in these dire challenges. More and more UN peacekeeping missions are taking place in dangerous and remote environments around the globe. In fact, two-thirds of all peacekeepers are currently deployed to areas experiencing active conflict, and they are increasingly viewed as targets for attack.

The string of attacks against Peacekeepers in Mali are likely to continue should the terror threat in the region continue to grow. We must maintain strong support for the UN presence and notably peacekeepers, who are putting their lives on the line to support a future of peace amid a growing terrorist hotbed.

On May 29, the day before Memorial Day here in the U.S., the world will commemorate International Day of UN Peacekeepers. It is a moment to honor the memory of UN Peacekeepers who have lost their lives in the pursuit of peace and recognize those who continue to serve valiantly despite the known dangers. On that day, the 73 fallen MINUMSA peacekeepers who have been killed since the mission first deployed in 2013 will be remembered alongside the more than 3,400 others who died before them serving under the UN flag.

This International Day of UN Peacekeepers, I urge you to take a moment to honor the soldiers in UN blue who have fallen striving for peace in Mali and in the fifteen other peacekeeping missions around the world.