The international community’s response must continue to be “fluid, nimble, and regional,” Ambassador Samantha Power, the U.S. Permanent Representative to the United Nations, told the UN Security Council on Friday, November 21 at a meeting on Peace and Security in Africa. She recalled the unprecedented Security Council resolution on Ebola that was signed in September and remarked that now, two months later, “We are beginning to see the impact of the international community’s collective response.” The UN had set a target of 70 percent of burials being completed in a safe and dignified manner within 60 days, in order to reduce new infections from unsafe burials, and the international community is working to meet this and other goals.

Ambassador Power also emphasized that there is still work to be done to stop Ebola. She listed five key ingredients for ending the outbreak: 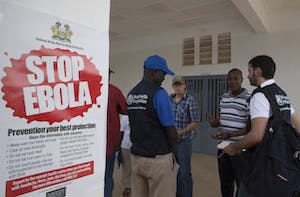 2. Donors must tailor the contributions to the needs of the moment, rather than what best suits their capitals;

4. The UN and its Member States need to better protect health workers and other volunteers from the affected countries, who should be able to serve their countries without fearing for their lives;

5. The UN Member States need to invest more in preparing neighboring countries to prevent new outbreaks, and to swiftly contain those outbreaks when they occur.

As an example, she said that the United States is working with international organizations, including the World Health Organization, and officials from more than 40 nations through the Global Health Security Agenda, which is increasing the preparedness of national health systems to respond to infectious disease threats and making global health security an international priority. Finally, she stressed that if we do what we have seen works to beat back this deadly virus, we will find the “bravest, most selfless partners in the world by our side” and that “there is no fight more noble than that.”