A Win-Win Approach for Refugees and Host Communities in Ethiopia

A Win-Win Approach for Refugees and Host Communities in Ethiopia

For decades, Ethiopia has opened its borders to refugees from neighboring countries. But like so many host nations, the country has restricted opportunities for refugees to obtain employment, education, health care, and financial services—until now.

As of January 2019, after extensive consultation with the UN Refugee Agency (UNHCR) and bold leadership from the country’s Prime Minister Abiy Ahmed, the government passed landmark legislation allowing refugees freedom of movement, fuller access to schools and hospitals, more opportunities in agriculture and industrial production, and connections to national financial resources, such as banking.

At the heart of this innovative new policy is a more comprehensive response to displacement in which refugees are included in national services like health and education, rather than a country establishing separate systems. The approach enables refugees to be self-reliant and contribute to local economies in a way that benefits Ethiopians and refugees alike.

While Ethiopia has a long history of openness—it is currently home to more than 900,000 registered refugees and asylum seekers, the second-largest population in Africa—this historic law represents a significant milestone on the continent. As Filippo Grandi, UN High Commissioner for Refugees, stated after its passage, “By allowing refugees the opportunity to be better integrated into society, Ethiopia…is serving as a model for other refugee-hosting nations around the world.”

Why has Ethiopia chosen this novel approach? One key reason is that while Ethiopia is one of the fastest-growing economies in Africa, it remains one of the poorest countries in the region. Government leaders recognized the positive impact that refugee integration could have on host communities and local economies. These officials also understood how this approach could lead to additional investment from donors. In fact, due to Ethiopia’s support for this “Comprehensive Refugee Response,” it became one of the first refugee-hosting nations to receive additional multi-year financing from the World Bank.

This May, I joined UNHCR in visiting one of the country’s largest refugee hubs, Melkadida, where more than 219,000 Somali refugees live in five camps near the southern border of Somalia and Ethiopia—alongside roughly 198,000 members of the host community. In other words, refugees actually outnumber local residents, which can often lead to friction over scarce resources.

But in my meetings with local residents, they supported the country’s new model and understood the benefits of collaboration. Seizing on this, UNHCR and its partners have focused their efforts in Melkadida on initiatives that will improve refugee prospects while also offering income-generating opportunities to the host community.

Here are a few examples of the “cooperatives” that have been launched:

UNHCR, Ethiopia’s Agency for Refugee & Returnee Affairs (ARRA), the IKEA Foundation and the Somali Regional State Government are working together to give refugees access to almost 2,500 acres of arable land on a 50-50 basis with their host community. 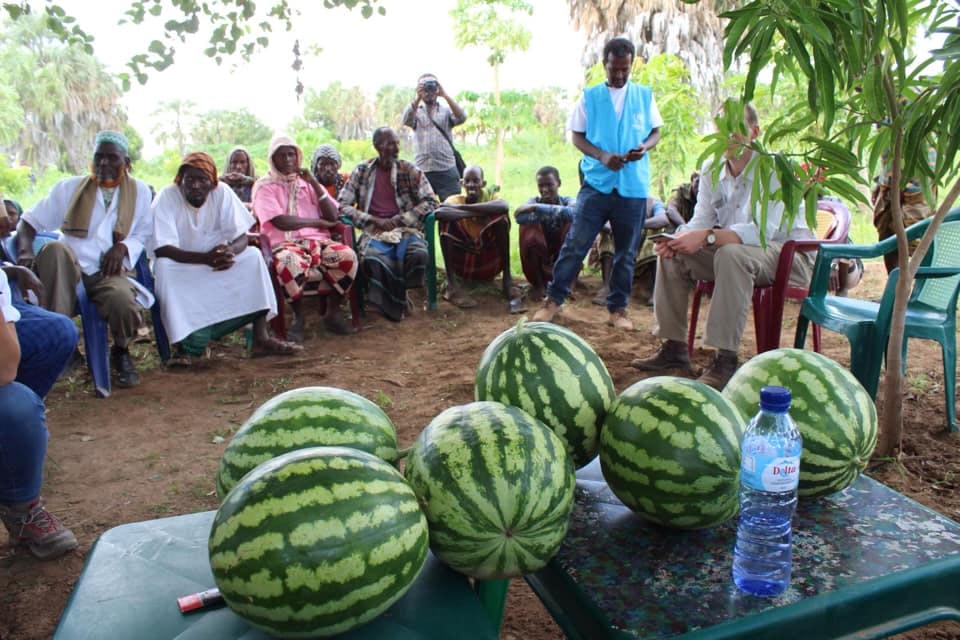 While still early in the implementation phase, I can speak to the high quality of the product.  (©UNF/Jordie Hannum)

By taking advantage of a nearby river, they have turned once-barren land into lush farms that grow crops such as watermelon, tomatoes, and corn up to three times a year. The market-oriented crop production will contribute to food security and efficient use of existing environmental resources. The project is expected to improve the lives of about 2,000 farmers, both refugees and local residents alike.

In Ethiopia, and many other parts of the world, the need for firewood amounts to a Sisyphean task that almost always falls on girls and women’s shoulders, exposing them to multiple threats while also exacerbating environmental degradation.

In the area around Melkadida, women often must spend 12-13 hours gathering wood for just a few days’ worth of fuel. Walking for this length of time can mean either leaving their children behind without food all day and/or removing kids from school to take care of siblings. These trips also expose women and girls to attack or sexual assault. In addition, competition for resources can result in conflicts with the host community. 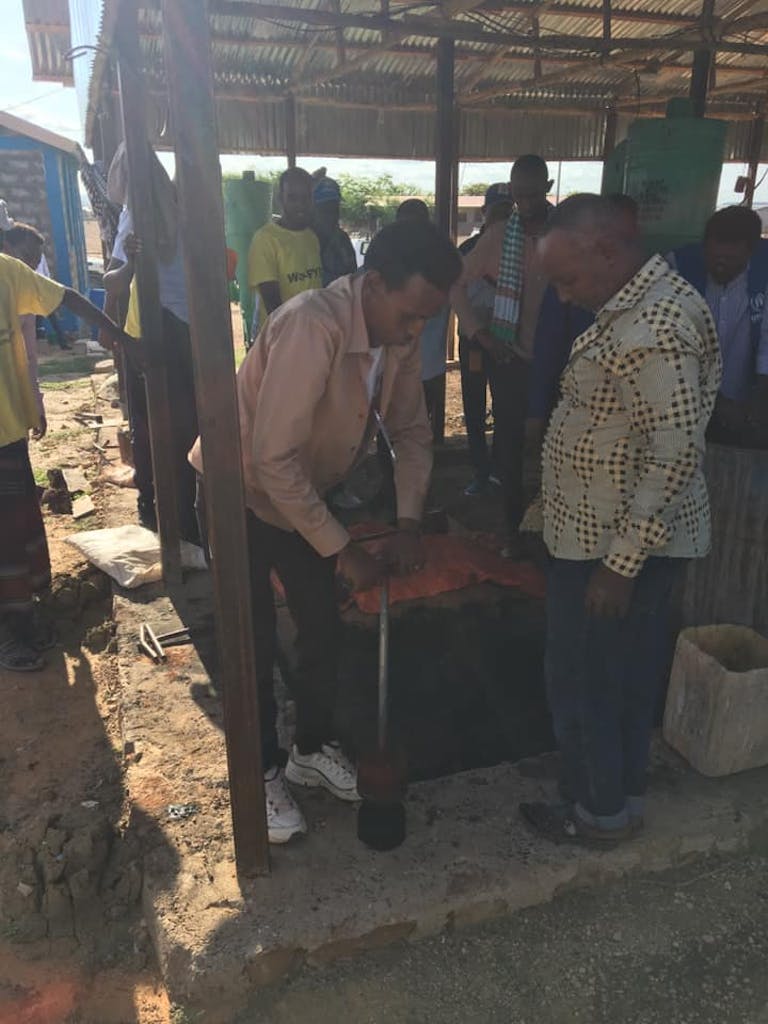 In order to address these problems and further enhance ties between refugees and local residents, the Prosopis Juliflora Firewood and Charcoal Briquettes Production Centre was established earlier this year. The Prosopis Juliflora trees, which are invasive and have been designated as pests by the Ethiopian Government, are abundant in the area, and the woody pieces of the plant can be collected and used to manufacture briquettes. (The briquettes release no smoke, unlike traditional charcoal or wood, and are less toxic and dangerous than kerosene.)

Once the cooperative—comprised almost entirely of women—produce these briquettes, it then sells them in local markets. Besides the commercial benefit and reducing tensions with the local community, these cooking alternatives greatly diminish the amount of time needed to collect firewood, which has meant more girls can go to school and more mothers can stay home and care for their children.

Community-based commercial animal markets have been established in all of the local refugee camps. In Melkadida, a livestock market facilitates animal trade, while businesses selling meat and milk have been set up by both refugees and local residents. In addition, slaughterhouses compliant with health regulations have been constructed, thus ensuring better quality of the meat products sold. 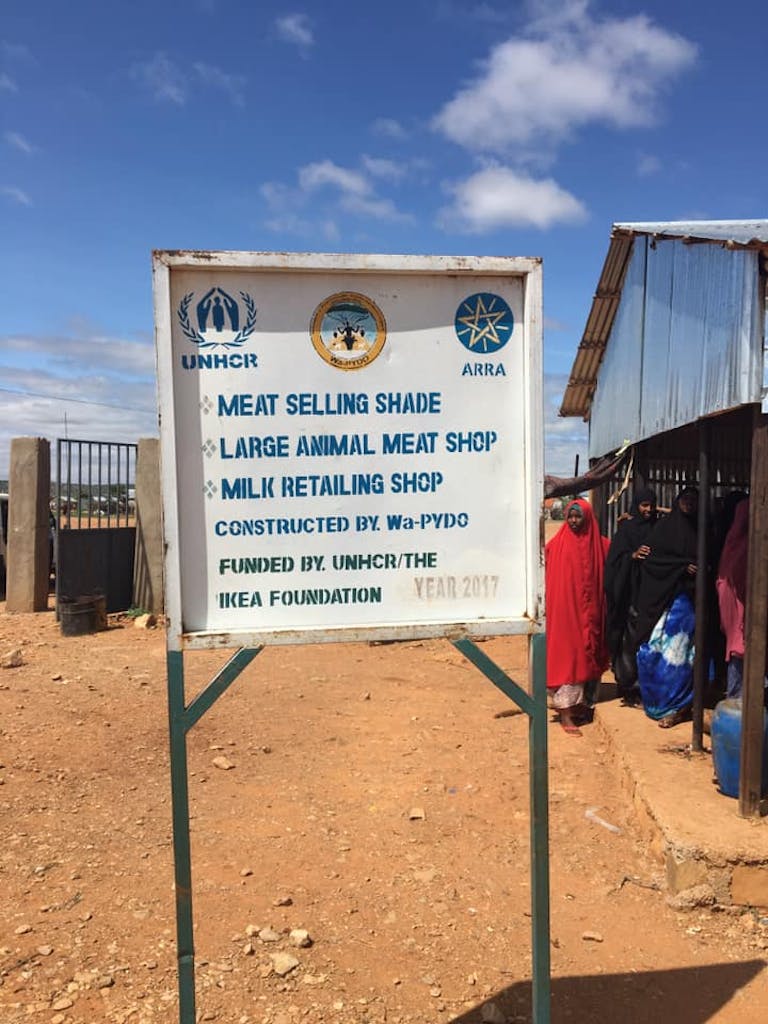 I recommend the goat. (©UNF/Jordie Hannum)

These are a just a few examples of the types of cooperatives being fostered. Going forward, UNHCR is working toward the registration of all cooperatives with the government to facilitate their access to banking services and markets. Witnessing this approach in action, an old expression comes to mind—“win-win.” By promoting this refugee/resident integration, both communities benefit.

But achieving “victory” will be difficult. For this success to continue, UNHCR needs more funding. While it receives strong support from the United States, UNHCR has received only 25% of the $347 million required to address humanitarian needs in Ethiopia. Further assistance from the U.S. Department of State, and USAID, as well as other donors, is needed to solidify the gains witnessed in Melkadida so far, as well as foster integration in other parts of the country.

In addition, for these reforms to take root, the U.S. and other members of the international community should seek ways to support this policy by Prime Minister Abiy. The Prime Minister, who is scheduled to stand for reelection in 2020, faces criticism from opponents of this new law, as well as challenges in the wake of the failed June 22 regional coup attempt and growing ethnic nationalism.

In short, the U.S. and other nations must act quickly, and they have a critical opportunity to develop a support package when world leaders gather for the upcoming UN General Assembly this month.

We cannot sit on the sidelines; we should assist Ethiopia in delivering on a worthy goal: Showing how refugees and the countries that host them can successfully build a more prosperous future—in partnership.