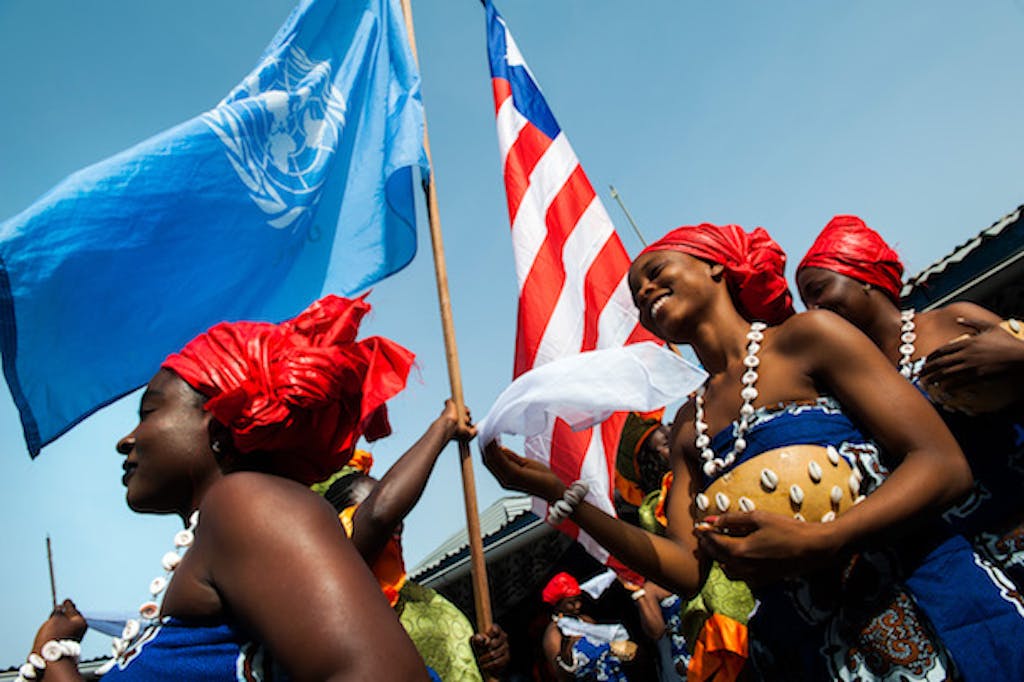 I just returned from a trip to Liberia, where I witnessed the end of the Liberia peacekeeping mission after 15 years of service. Liberia has a tumultuous past of violence, children forced to be soldiers, and the systematic use of rape as a weapon of war, but what I saw in the present was heartening and hopeful.

In fact, for the past 10 years, Liberia has been relatively peaceful under the leadership of then-President Ellen Johnson Sirleaf, the first woman president on the continent, and because of the service of UN peacekeepers, in partnership with Liberians and with the support of the U.S. government.

U.S. Support for Liberia and the UN Peacekeeping Mission

The U.S. and Liberia have a long history together that dates back to the 1820s when former American slaves resettled to Liberia. In 1847, Liberia became the first independent republic in Africa. U.S. influence has remained a constant in Liberia through development assistance, trade, and support during the crippling Ebola crisis, which infected 11,000 people.

When the UN Security Council mandated the UN Peacekeeping Mission in Liberia (UNMIL) to deploy in the country back in 2003, it was thanks to U.S. support at the highest levels. At the time, President George W. Bush stressed, “Together with the help of the United Nations Mission in Liberia, we’re working to heal the wounds of war, … strengthen democracy, and build a new armed forces.”

The head of the UN Peacekeeping mission in Liberia, Farid Zarif, credited much of the success of UNMIL to the support of the United States – partly through its assessed contributions to UN Peacekeeping. He says, that together, the U.S. and the UN “changed the destiny of a nation.”

Fifteen years after it was launched, UNMIL’s accomplishments are too long to list. However, there are three that stand out to me.

Second, they professionalized the Liberian Armed Forces and Liberian National Police and made them some of the most trusted institutions in the country today.

Third, they provided support for the country as it conducted three successful elections.

This past January, the country witnessed its first peaceful transfer of power in 74 years. The current President George Weah, once a soccer star from the impoverished district of Clara Town in Monrovia, is now working to implement his “pro-poor” agenda by promoting agriculture and reducing the cost of food, such as rice, a staple of the Liberian diet.

Visiting a nearby neighborhood of West Point, close to where the president was born, we met with vulnerable girls who are part of a UNICEF program to help lift girls from poverty by providing vocational skills to become pastry chefs, hair dressers, and entrepreneurs so they can improve their livelihoods and their families.

Transition from Peacekeeping to Peacebuilding

Now, as Liberia transitions from peacekeeping to peacebuilding, I am cautiously optimistic, although many challenges remain. For example, only 26% of children are enrolled in school, and 63% of the population is under the age of 25 and facing high unemployment rates, which can be recipes for conflict and violence. Amid great progress, we need the U.S., the UN, and the international community to maintain their commitment to Liberia.

UNMIL has handed off many of its tasks to the UN Development Programme (UNDP), which will work to maintain these important gains and coordinate with the government to promote a cohesive development agenda with international partners including the U.S., the European Union, Sweden, France, and China. Much work remains on this front.

The agricultural sector is the perfect example. Today, 80% of rice is imported and 40% of all food is imported into Liberia. However, with support of the new government, the UN and the Paynesville City Corporation have launched the first harvest of an urban rice project, which aims to address youth unemployment by providing food security for vulnerable Liberians.

This project has led to the first homegrown rice that is now sold in markets in Liberia. The participants from this program are also becoming ambassadors to youth across the country who can explain how agriculture can support their own financial security.

Traveling through Liberia, I saw a lot of possibility: Although many families struggle with poverty, the nation is rich in resources. It’s a situation that a fragile new government hopes to change, with the help of the international community and the support of United Nations agencies.