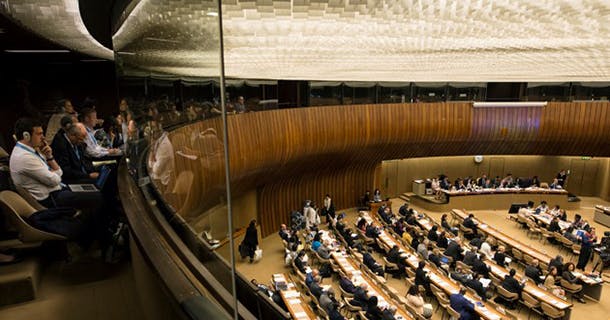 The 69th World Health Assembly (WHA) in Geneva demonstrated once again the central role of the World Health Organization (WHO) in global health. Whether one focuses on WHO’s global action plan on antimicrobial resistance or the international response to health emergencies like the Ebola and Zika viruses, there were countless venues for official and unofficial decisions and discussions on every health issue under the sun.

One of the unique benefits of discussions during the annual Assembly that one does not get in other hubs of public health is the depth of influence and expertise, from absolutely every corner of the globe, present at WHA in Geneva. With 194 Member States, WHO is able to bring together cabinet ministers for health, senior officials, and multitudes of experts from governments in addition to health leaders and staff from nongovernmental organizations, academic institutions, the media, and the private sector. The annual gathering plays a pivotal role in establishing the global health agenda.

At this WHA, which took place May 23-28, there was strong support for the reform of WHO’s work in health emergency management. The new health emergencies program represents a fundamental development that complements WHO’s traditional technical and normative roles with new operational capabilities for work in outbreaks and humanitarian emergencies. The new program is designed to bring speed and predictability to WHO’s emergency work, using an all-hazards approach, promoting collective action, and encompassing preparedness, readiness, response, and early recovery activities. That requires money, and the Assembly agreed to increase the 2016-2017 budget by $160 million through voluntary contributions (some of which already have been pledged).

The Ebola crisis in West Africa made it clear that countries need to greatly enhance their capacities to prevent, detect, and respond to infectious disease outbreaks. The globally accepted, fundamental framework to improve global health security is WHO’s International Health Regulations (IHR). Member States supported a new, voluntary tool for objective, external evaluations of IHR implementation, and there is now an alliance of governments and nongovernmental organizations supporting the process so that countries will be able to establish prioritized plans to improve their capabilities. Coupled with other efforts, such as WHO’s Contingency Fund for Emergencies and the new Pandemic Emergency Facility led by the World Bank, the effort to improve global health security is making significant progress – with much, much more to be done.

It is also clear that there now is much greater recognition that health efforts must fit into broader, multi-sectoral, multi-stakeholder approaches. This was the first WHA since UN Member States approved the Sustainable Development Goals, and the role of the health sector in achieving these goals and targets– along with the need to employ a holistic approach that breaks down institutional silos – was an underlying theme throughout the week. Featured speaker Christiana Figueres, Executive Secretary of the UN Framework Convention on Climate Change, highlighted the linkages between health and climate change.

Every WHA has a few particularly contentious issues that require extended negotiations, and this was no exception. After years of negotiations, agreement was finally reached on a framework for WHO to engage with non-state actors that is intended to avoid conflicts of interest while allowing WHO to work with many other institutions. A resolution on nutrition and guidance on the promotion of foods for infants and young children generated controversy, in part because of process and technical issues, but compromise language was accepted in the end.

Next year’s Assembly will select a new WHO Director-General to succeed Dr. Margaret Chan, and this WHA took steps to increase transparency around the upcoming election. These include webcasting live, in all official languages, the candidates’ forum planned for November 2016.

The explosive growth of global health programs over the last two decades has seen a concomitant growth in interest in WHA, and longtime attendees marvel at the increase in participation by NGOs and others. In a frenzy of networking, some 3,500 people converged on the UN’s Palais des Nations for this year’s Assembly. This was my 10th consecutive Assembly, and I have witnessed the range of issues at official and unofficial events during WHA week continue to expand – and the global health agenda has expanded accordingly.