A Big Week in the Fight against Global Poverty

A Big Week in the Fight against Global Poverty

Every day, when I head into work, I’m focused on how the UN Foundation can help the United Nations build a better world.  One of the top ways to do that: supporting the Millennium Development Goals (MDGs).

In her remarks to the UN General Assembly last week, Melinda Gates cited the MDGs as something the UN has done “very right,” and urged every leader to “move even faster on what has become an incredibly hopeful path.” With 822 days left to go until the end of 2015, the target date to achieve these anti-poverty goals, we all must step up our efforts.  Progress is possible, and there is not a day to waste.

What are the MDGs?

In 2000, governments and the UN embraced eight goals to tackle some of the world’s toughest – and most important – issues by 2015: reducing poverty and hunger, improving child and maternal health, turning the tide against diseases like AIDS and malaria, educating every child, and improving access to clean drinking water and sanitation, among others.

Since then, UN agencies, governments, businesses, civil society groups, nonprofits, and individuals have mobilized around the MDGs to drive incredible gains. Extreme poverty has been cut in half.  Child and maternal mortality rates have been reduced by nearly half. And more children than ever are in primary school.  As UN Secretary-General Ban Ki-moon, a tireless MDG leader, said last week, “This bold experiment has helped to catalyze one of the greatest surges in human well-being that the world has ever seen.”

At the same time, the Secretary-General reminded us that our work is incomplete and the clock is ticking.  We have a lot more work to do between now and 2015 – especially when it comes to addressing the disparities between and within countries.

The good news is we have the tools – from vaccines to bed nets, from savings accounts to voluntary family planning services – to accelerate progress on the MDGs.  But we need more resources, commitment, and cooperation. 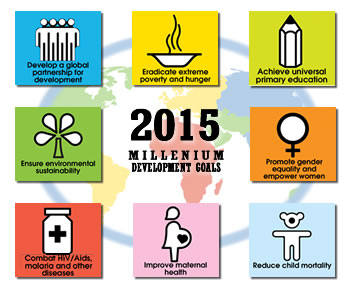 The MDGs at the UN General Assembly Last Week

That’s why the UN made the MDGs a top priority for discussion as world leaders gathered in New York last week for the UN General Assembly. Several events were held including the Secretary-General’s “MDG Success” event on Monday, September 23 and a special event at the General Assembly on Wednesday, September 25.  The UN Foundation was proud to host a lunch on Monday to support the MDGs.  These events brought together representatives from government, the private sector, and civil society to share lessons learned and exchange ideas on how we can speed up MDG progress.

Some exciting developments happened during the week that you should know about:

As the UN Foundation’s Founder and Chairman Ted Turner says, the MDGs are the world’s to-do list and each of us can be a part of the solution.  Learn more about them here, and let your family, friends, and leaders know that you support the MDGs.  Together, we can help make sure poverty only appears in history books.