5 Things to Know about How Climate Change Impacts the World

5 Things to Know about How Climate Change Impacts the World 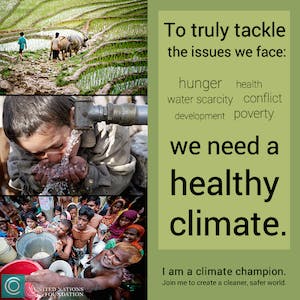 Today leading science experts released the latest United Nations report on the impacts of climate change around the world. As the Associated Press reported: “The big risks and overall effects of global warming are far more immediate and local than scientists once thought. It’s not just about melting ice, threatened animals and plants. It’s about the human problems of hunger, disease, drought, flooding, refugees and war, becoming worse.

“We can meet the climate challenge, but we must act now. Here are five things you need to know about climate change:

1. Climate change is already impacting every country in different ways.

Climate change is happening now, and it affects all of us. The UN reported last week that 2013 was the sixth warmest year in recorded history. This heat is having dangerous effects – record heat waves are affecting public health, droughts threaten food security, and water supplies for people around the world are at risk.

2. Our communities, our economies, and the air, land, and water we rely on are vulnerable to climate change.

Climate change threatens everything – from our food supply to the health of the oceans to the strength of our economies. It’s also increasingly clear that the poorest among us are harmed the most by climate change. UN Secretary-General Ban Ki-moon calls this “the greatest collective challenge facing humankind today.”

From rising sea levels to more intense storms, many communities are already dealing with the negative impacts of climate change.

Those who act now will be better prepared to minimize damage in the years ahead – and better positioned to seize the economic opportunities that come from transitioning to a clean energy future. That’s why communities from New York City to Buenos Aires are taking steps now to address climate change and its impacts.

Dealing with climate change is about managing risks. If we refuse to act, we risk losing so much:

If we take meaningful action now, we can help prevent many of these risks from becoming reality.

5. There is reason for optimism: We have the solutions to tackle climate change – we just need the will to act.
By transitioning to a clean energy future, we can address this challenge while creating economic opportunities. But getting there will take the collective will to act from citizens, communities, corporations, and world leaders alike.

Do you care about eradicating poverty and improving lives and global health? Then you care about climate change. Become a climate champion, and let world leaders know that we don’t want to wait for concrete, meaningful action on climate change. Our obligation to each other is to act. The challenge is real, and our chance to seize the opportunity is now.

TAKE ACTION: Let’s cover Facebook with the message that we want to be the generation that leaves our children and grandchildren with a cleaner, safer, inhabitable world. Share this image today!