5 Key Takeaways on UN-Business Collaboration for the Ebola Response

5 Key Takeaways on UN-Business Collaboration for the Ebola Response 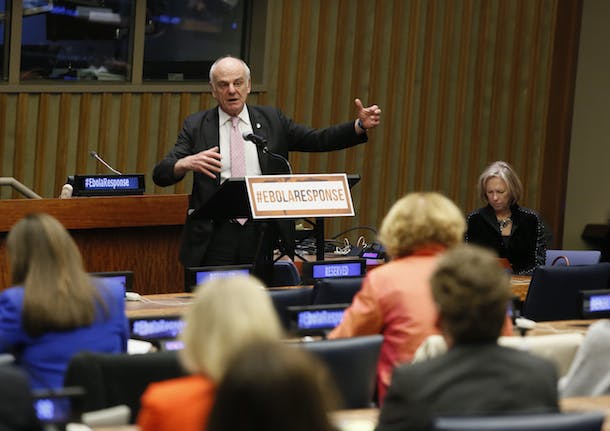 Last week, more than 150 leaders from United Nations agencies and organizations, the private sector – including foundations of large corporations – and civil society convened at UN Headquarters to discuss current successes in UN-business collaboration for the global Ebola response, as well as to identify ways to enhance this collaboration going forward. It was a day of varied dialogue and viewpoints, which yielded some important takeaways that will inform the response effort as the international community continues to work to bring the Ebola outbreak under control. Here are five of the most important points that were made throughout the day:

1. The outbreak is not yet over and may not be for several months. Even when it ends, the economic consequences will be even longer lasting. Throughout the day, participants emphasized that, despite progress, the Ebola crisis will not end in the near future. Only a sustained effort will enable the UN and its partners to ultimately stop the spread of disease. Once this happens, however, there will still be much work to do in terms of assisting the affected countries with economic recovery. One of the most important factors for this type of recovery will be to ensure that businesses have maintained a presence in the country and have continued to provide momentum for local economies.

2. Business has made – and will continue to make – an outstanding contribution to the response and recovery process. From the opening moments of the meeting, it was clear that many businesses have risen to the occasion by committing dollars, supplies/equipment and expertise to the Ebola response. As David Nabarro, UN Special Envoy on Ebola, stated, “The United Nations system has hugely benefited from the pro bono services of many companies.” This contribution will remain critical, as the international community looks to stem the outbreak and eventually move into a recovery phase, where restarting the stalled economies of these countries will be imperative.

3. The UN stands ready and eager to work with the private sector – not only on Ebola but also on long-term, meaningful partnerships. One theme that came up repeatedly was the concept that the global community can no longer rely on responding to disasters or public emergencies in silos. Rather, these responses require a cross-sector approach that involves the United Nations, governments, civil society and the private sector. The Ebola outbreak should serve as an opportunity for business to “rediscover the UN as an indispensable, long-term strategic partner,” in the words of Georg Kell, Executive Director of the UN Global Compact.

4. Business may be competitive, but when it comes to the public good, collaboration is key. Participants highlighted the need for businesses to also collaborate with each other in times of crisis, not just with the UN and civil society. In a particularly compelling example, an executive from the GE Foundation talked about how his organization is normally a bitter rival and fierce competitor with the company Philips. But, he said, exceptional circumstances sometimes call for unconventional partners, and the Ebola outbreak has demonstrated that even the fiercest of rivals can come together for the greater good.

5. Companies should feel confident that their contributions and resources will be put to good use by partners in the affected countries. In a fascinating lunch dialogue featuring representatives from the governments of affected countries, as well as countries taking a leading role in the response, experts with first-hand experience reiterated that many lessons have been learned since the outbreak began and countries are increasingly better equipped to respond. They underscored the hard work and tireless dedication of those managing the response – from high government levels down to the heroic corps of frontline health workers. Their message emphasized the need for a multi-sector response and implored businesses to have confidence that their investment in stopping Ebola and helping economies recover would be matched by the unflagging efforts of those working in the affected countries from governments, UN organizations, NGOs, etc.