In an era when we can land a rover on Mars and use our phones to access a world of information, millions of people still die of preventable diseases. But there’s also good news: We’re making significant progress in saving lives.

The United Nations and many governments, businesses, researchers, donors, and civil society groups have mobilized to improve global health. Check out some of the statistics:

These results happened for a number of reasons: advances in medicine and technology; innovations in how we buy and distribute vaccines, medicine, and other treatments; policy leadership by countries; substantial financial investments; and the commitment of the United Nations and many organizations in the public and private sectors. The key takeaway: Change happened because the world decided to act – and act in partnership.

For example, the UN Secretary-General’s Every Woman Every Child movement has provided a common framework for governments, businesses, and others to accelerate progress to advance the health of women and children. It’s also catalyzed more than $20 billion in new funds for this effort.

Another great example of what’s working in global health is measles, thanks in large part to the multi-partner Measles & Rubella Initiative.  Beyond the staggering progress in reducing measles mortality noted above, all countries of the world have now set targets for when their regions hope to eliminate measles altogether.

We still have a lot of work to do to fight disease and give more people the chance to lead healthy lives. But as we’ve seen in the past, we can make a difference.

· The UN Foundation’s Nothing But Nets campaign raises awareness and funding to fight malaria.

· The Foundation’s Shot@Life campaign works to expand access to vaccines to save the lives of children in developing countries.

· The Measles & Rubella Initiative works to protect children from measles and rubella. 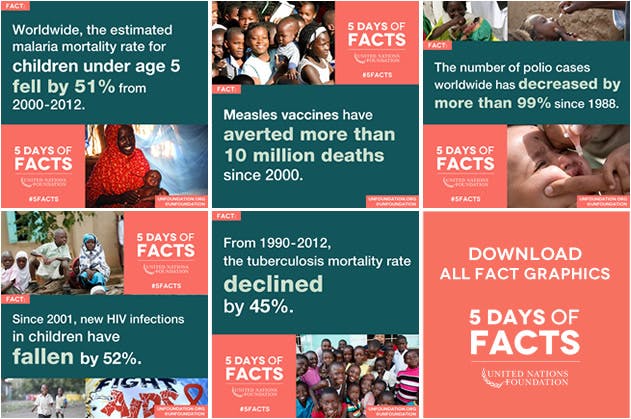