4 Things to Know about Child Survival

4 Things to Know about Child Survival 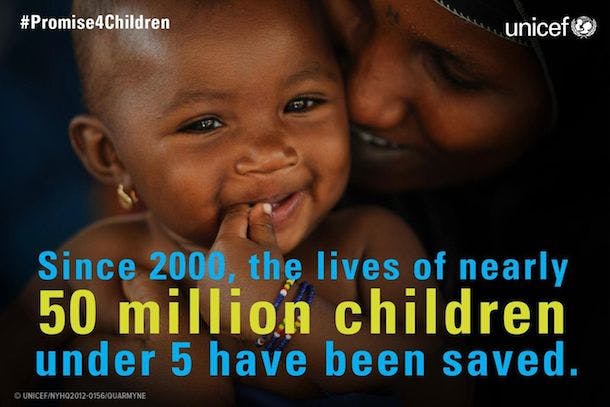 Today, United Nations agencies released two new reports on child survival – “Levels and Trends in Child Mortality Report 2015”and “A Promise Renewed: 2015 Progress Report” – highlighting one of the greatest achievements of the new millennium: the lives of 48 million children under the age of 5 have been saved since 2000.

That’s when governments, civil society and communities came together and committed to achieving the eight Millennium Development Goals (MDGs). The MDGs set the stage for ending preventable child deaths, and later this month, the world will build on the momentum and success of the MDGs when the UN General Assembly is expected to adopt the new Sustainable Development Goals (SDGs).

Concurrently, the UN Secretary-General is set to launch a new Global Strategy for Newborns’, Children’s, Adolescents’, and Women’s Health to focus energies on some of the most vulnerable and ensure every woman and child has the ability to survive and thrive.

These new global agendas will challenge countries to significantly increase their efforts to bring rates of under-five mortality down to 25 deaths (or fewer) per 1,000 live births, which could save an additional 38 million children under-5 by 2030.

Here’s what you need to know from the reports:

1. We have seen huge progress, but we’re not finished yet. Worldwide, both the under-5 mortality rate and annual number of under-5 deaths have fallen by more than half since 1990.

As a founding partner of the Measles & Rubella Initiative, the United Nations Foundation is proud that the measles vaccine has helped avert more than 15.6 million child deaths between 2001- 2013.

Despite the progress made, only 62 countries have reached the MDG 4 target of a two-thirds reduction in under-5 mortality. There are still 16,000 children under the age of 5 still die every day — 11 every minute.

3. There are huge inequalities: A child born in a low-income country is, on average, 11 times as likely to die before the age of five as a child in a high-income country.

Children from rural areas are 1.7 times as likely to die before the age of five as children from urban areas.

Children of mothers who lack education are 2.8 times as likely to die before the age of 5 as children whose mothers have secondary or higher education.

4. Most under-5 deaths are preventable: Of the 5.9 million under-5 deaths in 2015, almost half were caused by leading infectious diseases and conditions such as pneumonia, diarrhea, malaria, meningitis, tetanus, measles, sepsis, and AIDS – all of which could be prevented or treated with proven, cost-effective interventions.

The UN Foundation provides some easy ways for you to be a part of those solutions, including through our Shot@Life and Nothing But Nets campaigns.