4 Ideas to Deliver a Better Future

4 Ideas to Deliver a Better Future 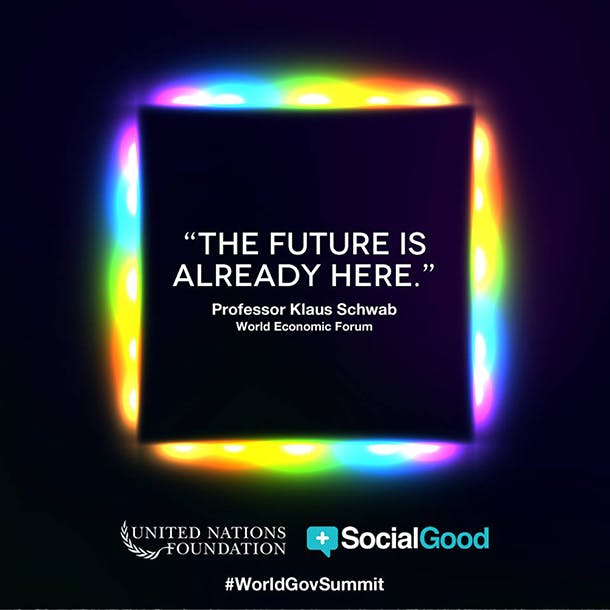 The future is something that we talk about, yet it can be a difficult thing to “see.” But we have gotten a glimpse of what the future will look like during a meeting taking place this week in Dubai. The theme of this convening is “shaping future governments” and it asks how governments around the world can innovate to deliver in better, more meaningful ways for their people. As the international community works to achieve the global goals, governments and public-private partnerships will play key roles.

Here are few key themes that stood out during the first day of the meeting.

There is a new industrial revolution underway.

There was a lot of excitement about the work of Klaus Schwab, and his ideas on the “Fourth Industrial Revolution.” Schwab’s theory revolves around how technology and innovation are changing the systems of the world and what that means for us in the future, on everything from job creation to our sense of community. He particularly noted the need for governments to foster innovation to promote opportunity for all, and for society to use innovation to serve humanity.

Communicating about how governments serve their people isn’t about marketing; it’s about meaning.

Many people noted the importance of information and conversation between governments and citizens. Many colleagues in the media have pointed to the need to make real investments in this area to foster an engaged citizenry on the issues of our time. (More on this topic later. I am worried about/excited about what is happening in the area of media partnerships and media training around innovation and global challenges. I am collecting information for a new project in this arena and welcome ideas or examples of who is doing it right, and what we need to do better.)

We’re not starting from scratch when it comes to global progress.

Global goals work. As Dr. Mahmoud Mohieldin of the World Bank and many others noted, the international community has made important gains in a number of areas under the Millennium Development Goals, such as expanding access to clean drinking water and reducing child deaths.

This was a good reminder that we need to look back on what has worked while designing something for the future. It’s clear that when we band together as a global community around common goals, we can make progress happen. And we have more data than ever before to measure this progress. Now we need to leverage this data to get the most out of development policies and programs.

The time to act is now.

A sense of urgency has been clear throughout the discussions here in Dubai. The world faces big challenges, and we can’t afford to wait to address them. A reporter from Al Arabiya underscored this point by quoting a traditional Arabic phrase, “Time is like a sword, either you cut it or it cuts you.” Planning and urgency are at the heart of smart international development, smart government delivery, and smart sustainability.

I’m looking forward to another day of smart discussions tomorrow. While we may not have all the answers to building a better future, I feel good that if we work together, we can make progress. Follow @plus_socialgood and #WorldGovSummit on Twitter to join the conversation.