The recent IMF/World Bank spring meetings were another important moment for the Millennium Development Goals (MDGs) as leaders from around the world came together to make a number of important announcements. Gathered in Washington, D.C. for the meetings, United Nations officials and partners from government, civil society, the private sector, and multilateral institutions highlighted the urgent need to step up efforts to improve lives around the world through the MDGs.

Established in 2000 by the UN and governments around the world, the MDGs provide a shared “to-do list” for the global community: reduce poverty and hunger, improve education and health, and promote gender equality and the environment – all with a target achievement date of 2015.

As Ted Turner, the Founder and Chairman of the UN Foundation and an MDG Advocate, recently said, “We have made tremendous progress – the MDGs have spearheaded political commitments and momentum is gaining speed. But this is not the time to slow down – we know there is still much work to be done.” 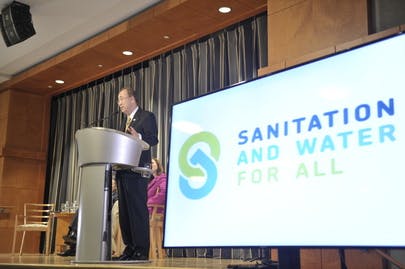 Here are three big announcements from last week that will help keep up the momentum to transform lives through the MDGs.

1. Education (MDG 2): MDG 2 set a goal for all children to complete primary school by 2015. While we’ve made significant progress, around the world 57 million children of primary school age are still not in school.

That’s why last week the UN’s Special Envoy for Global Education Gordon Brown launched an “Emergency Coalition for Global Education Action,” which includes leaders ranging from Archbishop Desmond Tutu to Shakira who have pledged to help accelerate efforts for marginalized populations, advocate for increased funding, and help to hold donors and governments accountable to deliver results.

This group will work alongside youth and other leaders to increase global focus on education and overcome barriers – like child marriage and child labor – that keep children from school through a 500-Day Global Education Countdown Campaign. Learn more here.

A World at School, an international organization founded by Sarah Brown, also announced 500 Global Youth Ambassadors and a Global Faiths Coalition for Education to support the push for universal education. Learn more here.

2. Sanitation (MDG 7): Around the world, 2.5 billion people don’t have access to basic sanitation, which results in disease, safety risks, and other problems. Efforts to improve access are not moving as quickly as they need to, which is why the UN and the World Bank brought together governments, civil society, and other partners for the Sanitation and Water for All High Level Meeting.

Over forty countries made a combined 265 new commitments to increase funding for and expand access to clean water and sanitation. Read more here.

3. Health (MDGs 4, 5, and 6): MDGs 4, 5, and 6 focus on reducing child mortality, improving maternal health, and combating HIV/AIDS, malaria, and other diseases. As UN Secretary-General Ban Ki-moon has said, “Countries around the world have achieved great advances on health through the Millennium Development Goals. … But now we have to go further – and that means reaching the most vulnerable people.”

On April 11, UN Secretary-General Ban Ki-moon, World Bank President Dr. Jim Yong Kim, and other leaders came together for an event to emphasize the importance of investing in health to achieve universal health coverage by 2030.

In his remarks Dr. Kim said, “The World Bank Group remains deeply committed to helping countries push as far and as fast as possible toward all of the goals. Yet despite all our best efforts, there will be unfinished business when 2015 ends…So as UN member states come together to forge the post-2015 development framework…we must build on the progress made through the health MDGs and work together to set goals that are universal and based on the principle of health equity for all.”

This high-level commitment to health can help mobilize the world to accelerate efforts to achieve the health MDGs and build a foundation for further progress after 2015.

To learn more about the MDGs, visit un.org/millenniumgoals and follow @unfoundation on Twitter to join us in acting for a better world.