216 Million Reasons to Continue the Fight against Hunger

216 Million Reasons to Continue the Fight against Hunger

According to the annual hunger report from the United Nations, the number of hungry people in the world has dropped to 795 million, which is 216 million fewer people than in 1990-1992.

The State of Food Insecurity in the World report, released yesterday, states that 72 of the 129 countries monitored by the Food and Agriculture Organization (FAO) have met the Millennium Development Goal target of halving the proportion of undernourished people by the end of 2015. 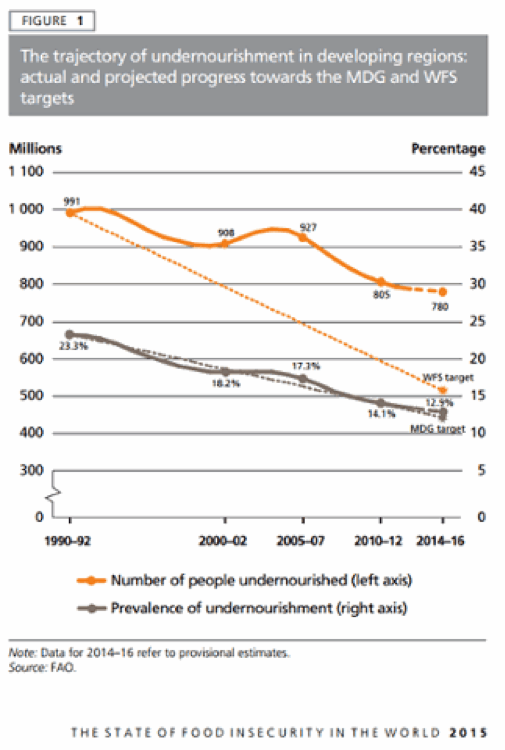 “The near-achievement of the MDG hunger targets shows us that we can indeed eliminate the scourge of hunger in our lifetime. We must be the Zero Hunger generation,” said FAO Director General José Graziano da Silva.

While the world has made important progress in reducing hunger, still today around one in nine people go hungry. The report noted that extreme weather events, natural disasters, conflict, and political instability are hampering efforts to end hunger. In fact, 24 countries in Africa are dealing with food crises.

The report outlines steps that can be taken to reduce hunger globally, including:

The progress we’ve made to reduce hunger is evidence that when the world acts, we can make a difference. As we transition from the Millennium Development Goals to the next set of global goals, we need to keep up our collective efforts to end hunger.

We can end hunger, but we need the will and the resources to make it happen.

You can learn more about UN efforts to end hunger by visiting: